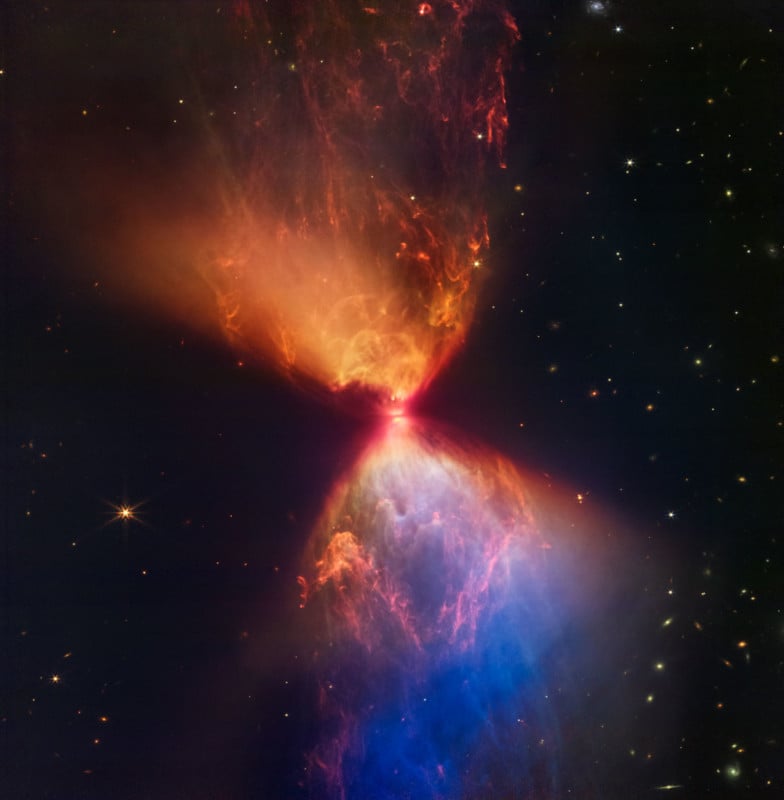 The James Webb Space Telescope has captured a protostar that was previously hidden from other space telescopes in a dark cloud known as L1527. The photo reveals what appears as a “fiery hourglass” and gives astronomers insight into a new star’s formation.

The photo was captured in infrared using Webb’s Near-Infrared camera (NIRCam), and the vibrant blue, red, and orange colors are only visible in that wavelength and show the protostar gathering material on its way to becoming a star. NASA explains that the protostar itself is actually hidden from view in this photo within the dark “neck” of the hourglass shape.

“An edge-on protoplanetary disk is seen as a dark line across the middle of the neck. Light from the protostar leaks above and below this disk, illuminating cavities within the surrounding gas and dust,” the space agency explains.

NASA says that the representative colors here are due to layers of dust between the James Webb Space Telescope and the dark clouds, and the blue areas are where that dust is the thinnest. As the dust thickens, less blue light can escape and that is what makes the areas appear orange.

“Webb also reveals filaments of molecular hydrogen that have been shocked as the protostar ejects material away from it. Shocks and turbulence inhibit the formation of new stars, which would otherwise form all throughout the cloud. As a result, the protostar dominates the space, taking much of the material for itself,” NASA says, elaborating.

NASA and the Webb team say that L1527 is only about 100,000 years old, which in star terms is very young: NASA considers it a class 0 protostar, which is the earliest stage of star formation. Over time, it will continue to gather mass and its core will continue to compress and get closer to stable nuclear fusion. The protostar doesn’t generate its own energy through this process yet, and its shape is currently mostly unstable, though slightly spherical, and only about 20 to 40% the mass of Earth’s Sun.

While its mass isn’t quite there yet, the scale of this photo is massive. The dark band at the center of the hourglass “neck” is about the size of Earth’s solar system.

“Given the density, it’s not unusual for much of this material to clump together — the beginnings of planets. Ultimately, this view of L1527 provides a window into what our Sun and solar system looked like in their infancy,” NASA says.