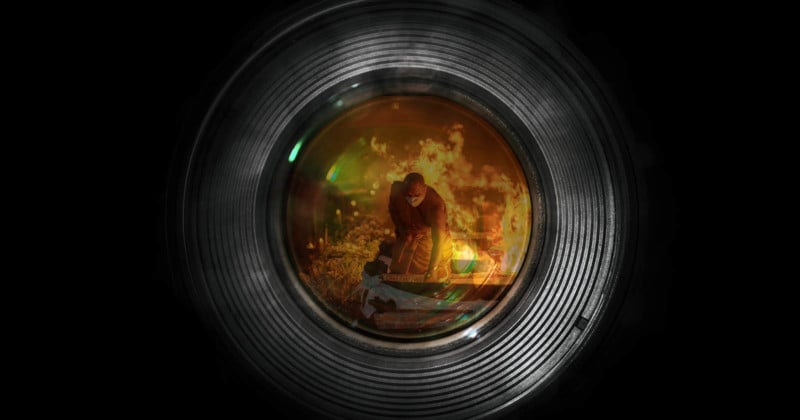 “First do no harm…” Sometimes I think that there should be a Hippocratic oath for journalists due to the extremely sensitive stories that we sometimes encounter, and if there were such a text, it should start with those preceding four words.


I recently spent 5 days covering the Uthai Suwan daycare center massacre in Nong Bua Lamphu province, Thailand, which personally was the worst story I have ever documented in my 9-year career as a photojournalist.

Most of my colleagues exemplified the finest aspects of what a journalist should be; thoughtful, respectful, and helpful to those around them who have been unexpectedly thrust into the international spotlight for the worst possible of reasons. Others however displayed behavior that brings a bad name to anyone associated with the profession, most notably the two-person CNN crew that callously entered the daycare center building that was the site of the majority of the 38 deaths in order to film a segment with floors splattered by the still-coagulating blood of toddlers.

Their justification for their actions, with the excuse of having been waved in by an unnamed individual not vested with the authority to do so, is widely regarded as gross negligence and terrible judgment on their part at best, especially due to the fact that both are seasoned journalists with years of experience covering international news. The resulting controversy their actions caused saw them arrested and swiftly deported from Thailand, though not barred from returning in the future, after paying a token 5000 baht ($133) fine each for working in the country illegally.

Beyond this high-profile example, there were other instances of insensitivity to varying degrees in the way still shell-shocked family members were asked for interviews despite clearly being in no state to do so, the onus being on the individual to have enough social intelligence and consideration to behave accordingly.

From my own perspective as someone who has witnessed people exhuming the still decaying bodies of their loved ones from temporary graves during the aftermath of the battle of Mosul in 2017, the tact and respect needed to work in situations like this is very clear, not madly clicking away rushing from angle to angle and frame to frame but instead showing your own recognition for the gravity of the event. Offering comfort to the families, assisting them in any way, and at the very least being a friendly face in a place where there is usually only pain and despair.

A close colleague and friend who covered the 2010 Phnom Penh, Cambodia, stampede (which killed 347 people and injured a further 755) related a story to me after I returned to Bangkok — a story that he had never mentioned previously. The victims killed during the stampede were unceremoniously thrown into the back of cargo trucks like sacks of trash, not even given the dignity of a body bag. Just as the last of them had been loaded, a Western journalist suddenly arrived in a frenzy, and upon seeing that he had missed the removal started to scream “I missed it, I missed it, I can’t believe I missed it” while running around in a frenzy.

It goes without saying that his reaction was completely out of place and inappropriate for any journalist to display.

Often I have been asked by budding photojournalists about how people react to my presence while working these stories and if people are angry or unhappy with my presence there. “Do the families get mad at you?” “How close do you get for a picture?”. The answer I give is that you need to take your time.

Wat Rat Samakee temple hosted the 3-day funeral rights for 19 of the victims, and their families were always present. Daily they would bring flowers, toys, and snacks to place in front of the ornately festooned metallic refrigerated coffins holding 18 of the child victims and their 28-year-old teacher who despite being 8 months pregnant still tried to fight off the assailant. Those of us who entered the temple were met with a calm yet tense atmosphere, but from my own experience, no one resented our presence.

My own way of handling the situation was to take time, get on my knees in front of the coffins, look and wait, and take several minutes before starting to make any photographs. Make it visibly known that this is not just another normal day for you, because it really shouldn’t be. During my years living in Thailand I have found my own understanding of cultural sensibilities, and how as a foreigner to navigate them. Taking the time to at least learn the basics of the language of the country where you work, assuming you are outside of your home country, is of immeasurable value.

There is another side to this dichotomy as well, because sometimes the families want you there to show what injustices have befallen them and their loved ones. Ron Haviv, one of my photojournalism instructors whom I learned from in a photojournalism workshop in 2015 as I was getting my start in the field, told a story from when he covered the Balkan wars of the early 1990s. He had arrived at a wake for an individual killed during the conflict he found himself feeling uncomfortable and started to leave. He was stopped by an older male family member who brought him back in, telling him to take pictures in order to show the world what happened to his family member and people in his country.

The context of the situation makes a difference, in the case of sectarian strife and injustice it can very well be that the families of the slain are grateful for the presence of journalists to spread the word of the wrongs done to them, in other cases a lighter touch is necessary, such as it was in Uthai Suwan.

Reporting on tragedy, war, and death is the most difficult subject any journalist will be faced with in their careers whether they be writers, on-air correspondents, videographers, or photojournalists, but in any case, we must remember to first do no harm.

About the author: Adryel Talamantes (b. 1986) is a photojournalist originally from the United States based in Bangkok, Thailand. The focus of his work centers on news and documentary subject matter and he has covered stories in Cambodia, the Hong Kong S.A.R. ( China), Iraq, Laos, Myanmar, Thailand, and the USA. His photography has been published by outlets and organizations including The Wall Street Journal, USA TODAY, The Guardian, Thompson Reuters, L’ Obs (Le Nouvel Observateur), Der Stern, The Guardian Weekly, The Times (UK), Nikkei Asian Review, Le Monde, VICE, Amnesty International, Human Rights Watch, Al Jazeera, Foreign Policy, Deutsch Welle (DW), The New York Post, Mother Jones, BBC Mundo, The Diplomat, PRI/Global Post, Speigel Online, The Straits Times, Yahoo News, Bild, War Is Boring, and Remote Lands among others. He is an alumnus of the 2016 Eddie Adams workshop. You can find more of Talamantes’s work on his website and Instagram.