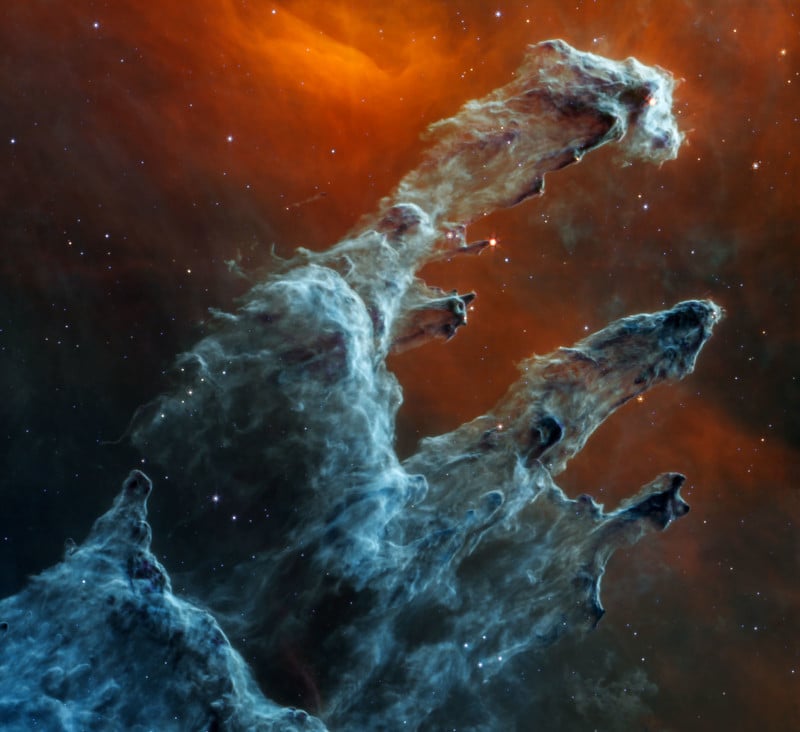 It’s not just Hubble that’s getting into the Halloween spirit. The James Webb Space Telescope team has released a new mid-infrared photo of the Pillars of Creation, a view that “strikes a chilling tone.”

The photo, released today by the Webb team, shows how different a photo of a celestial object can look depending on the wavelength of light the camera taking the photo is set to capture. Earlier this month, Webb captured the Pillars of Creation using its Near-Infrared Camera (NIRCam) and was able to create a breathtaking 122-megapixel photo of one of the most beautiful celestial objects astronomers observe.

This time, Webb used its Mid-Infrared Instrument (MIRI) which was better able to pick up the dust of the region, which NASA says is a major ingredient for star formation.

“Many stars are actively forming in these dense blue-gray pillars. When knots of gas and dust with sufficient mass form in these regions, they begin to collapse under their own gravitational attraction, slowly heat up — and eventually form new stars,” the Webb team explains.

These Hubble and @NASAWebb views of the Pillars of Creation demonstrate how looking at the same cosmic object in different wavelengths of light can unveil different features: https://t.co/WgWBtmsyFn

If the photo looks unusual because the stars aren’t visible, that’s because stars don’t emit much in the mid-infrared light spectrum. The Webb team explains that stars are more easily detectable in the ultraviolet, visible, and near-infrared and in this case, only two types of stars can be easily identified.

“The stars at the end of the thick, dusty pillars have recently eroded the material surrounding them. They show up in red because their atmospheres are still enshrouded in cloaks of dust. In contrast, blue tones indicate stars that are older and have shed most of their gas and dust,” the Webb team says.

The Webb team says that this mid-infrared data helps researchers determine how much dust is present and what it is made of, which will allow them to create more precise models of the Pillars of Creation, therefore helping them more clearly understand how stars form in this region.