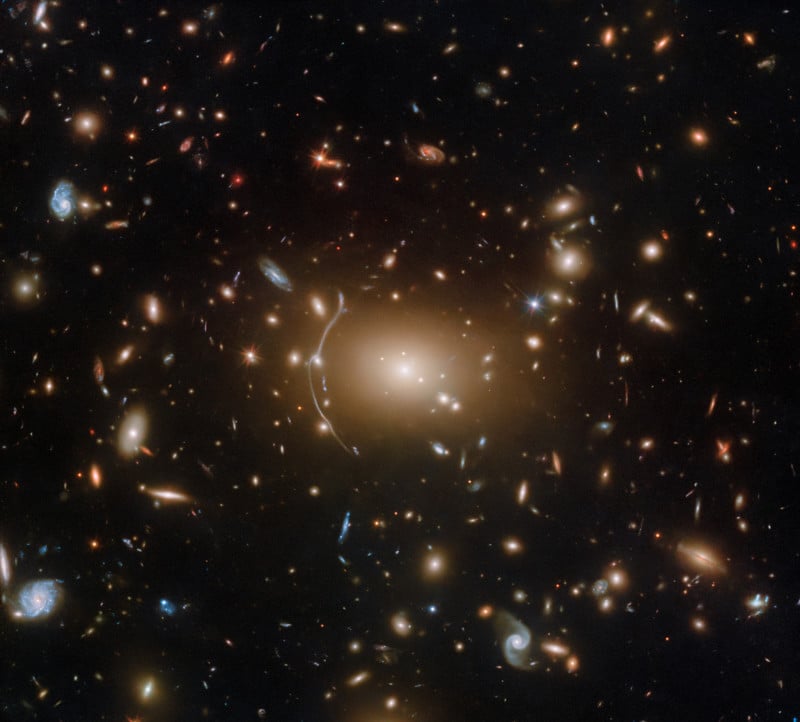 Hubble is getting into the Halloween spirit with its photo of the galaxy cluster Abell 611. This, like all galaxy clusters, is a cosmic mystery to astronomers who aren’t sure how it is able to stay together since there doesn’t seem to be enough mass to keep it from flying apart.

Shared by the European Space Agency (ESA), the photo depicts Abell 611, a galaxy cluster that is located over 1000 megaparsecs, or about 3.2 billion light years, from Earth. The ESA says that this “cosmic cobweb” is a mystery since astronomers can’t definitively explain how it is able to stay together since there does not appear to be enough mass in its web of rapidly rotating constituent galaxies to prevent the cluster from flying apart

“This is a well-established issue in astronomy with very massive structures, such as galaxies and galaxy clusters — they just do not seem to contain enough combined mass to remain whole,” the ESA says. “Interestingly, this problem does not present itself on smaller cosmic scales. For example, the passage of the planets of the Solar System around the Sun can be calculated relatively easily using the masses and locations of the planets and the Sun. No extra mass is needed to explain the integrity of the Solar System, or other star-planet systems.”

Astronomers can’t explain how this rule is broken when expanded to a much larger scale, such as what is seen with Abell 611, but they have theories. The most popular one posits that the Universe contains huge amounts of what is called dark matter, and while that name may sound spooky, the ESA says the term “dark” just refers to the fact that it doesn’t seem to interact with light like other matter does: it does not reflect nor absorb any part of the electromagnetic spectrum.

Since it doesn’t interact with light, which is basically the only way humans know how to see things, dark matter is extremely difficult to study.

“This dark quality makes dark matter incredibly difficult to characterize, although various possibilities have been postulated. Essentially, most dark matter candidates fall into one of two categories: some type of particle that exists in vast quantities throughout the Universe, but for some reason does not interact with light as other particles do; or some type of massive object that also exists in great abundance throughout the Universe, but does not lend itself to detection using current telescope technology,” the ESA explains.

To date, no evidence has been found of any form of dark matter, so it remains just a theory.

This photo has a particular “bendy” visual characteristic to it thanks to it only being captured thanks to a technique called gravitational lensing. That is, the gravity of an object distorts space in such a way that it makes an “optic” that channels light towards Hubble and gives it the ability to see galaxies that are normally too far away to be studied with current technology and physical telescopes.

“An example of lensing is perhaps most clearly visible in the centre of the image, to the left of the cluster’s glowing core, where a curve of light can be seen. This curve is light from a more distant source that has been bent and distorted (or ‘lensed’) by Abell 611’s vast mass,” the ESA says.