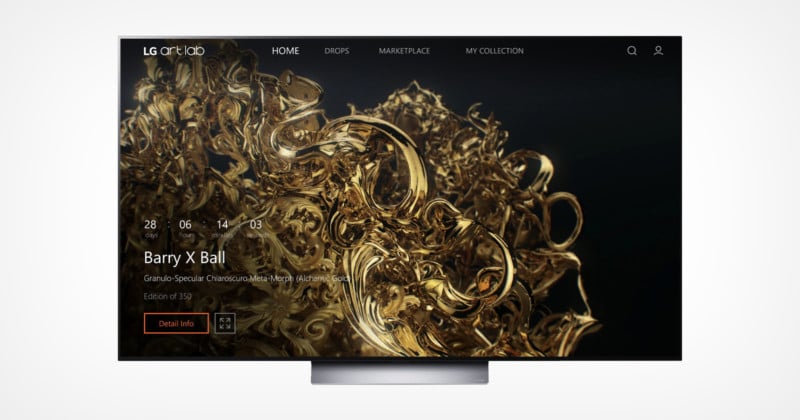 LG has followed in the footsteps of Samsung and announced a new non-fungible token (NFT) platform for its televisions that will allow users to buy, sell, and display their digital artwork in their living rooms.

Called LG Art Lab, the platform is rolling out today to all LG televisions that are running webOS 5.0 or later and will be directly accessible from the home screen. The company says that this new NFT marketplace acts as a “convenient, one-stop solution” for viewing and trading NFTs.

LG will support the new platform with what it calls LG Art Drops, which will profile artists and will serve to preview new works that will come soon to the platform in “drops.” Those drops will feature a countdown that will let anyone interested keep track of when exactly a new NFT is becoming available.

LG Art Lab is built in collaboration with Hedera, a blockchain provider that touts itself as having the lowest carbon footprint. LG says it is the “most used, sustainable, enterprise-grade public ledger for the decentralized economy” and “makes buying and selling as simple as possible, incorporating onscreen QR codes that let users quickly complete transactions via Wallypto – the company’s crypto-currency wallet for smartphones.”

Once an NFT is purchased it can be traded on the LG Art Lab Marketplace and its entire transaction history is also viewable there. All owned NFTs can be seen in the My Collection screen.

“To help users gain a deeper understanding of their favorite NFTs and the creative minds behind them, the platform also presents informative artwork descriptions and short films that illuminate the artists’ creative processes,” LG says. “Users can follow and learn more about each artist in the app’s profile feature, and will even have the opportunity to meet some of them at upcoming, LG-sponsored art events.”

The timing of LG’s announcement is somewhat telling. Nothing says “maybe no one will see this” quite like dropping an announcement on the Sunday night of Labor Day weekend. It’s very likely LG has been working on this marketplace for some time, back when the NFT boom was in full swing. But now, one year after it peaked, the NFT market has plummeted. Just this year, sales volume has fallen from $5.7 billion in January to $903 million in July while transactions fell about 50%.

So yes, customers can now buy, sell, trade, and display NFTs on their LG TVs — but it’s unlikely that very many will.