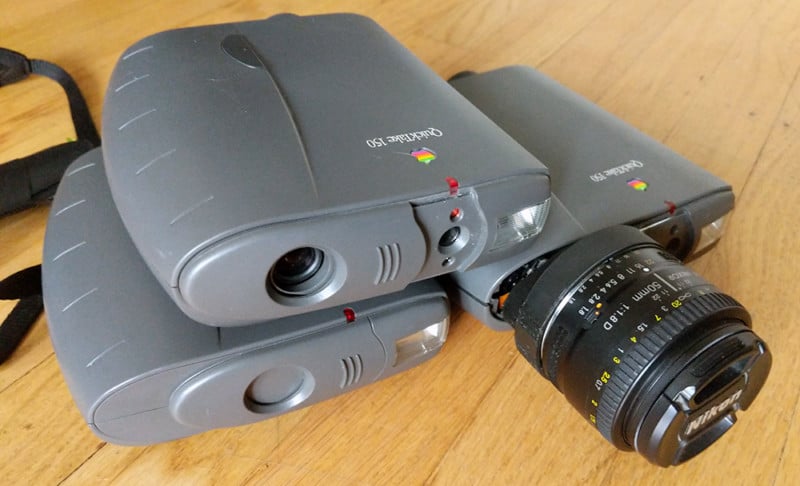 Apple’s foray into digital cameras was short-lived but one photographer is still using his, only with a Nikon F-Mount placed on the 1995 camera.

Brian Benchoff made the unique camera by 3D-printing an F-mount adapter to an Apple QuickTake 150, one of the earliest digital cameras ever made that takes photos at a resolution of 640×480.

In order to create the Frankstein camera, Benchoff opened up the Quicktake and moved the PCB sensor forward through the use of standoffs. 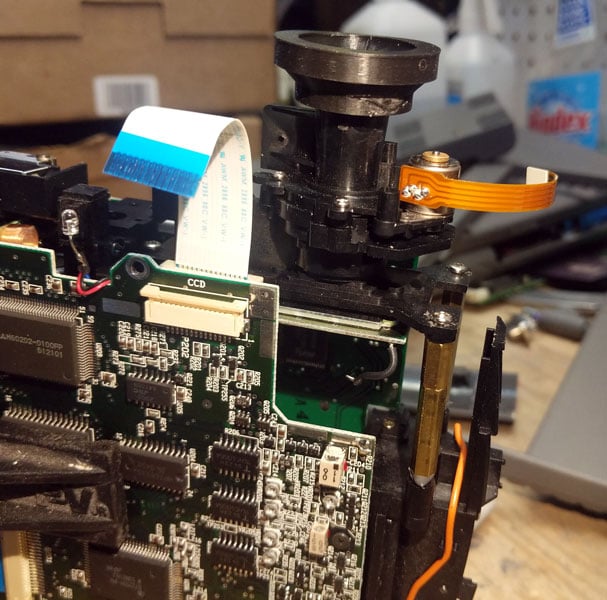 He removed all optical elements from the lens path and mounted a 3D-printed F-mount adapter exactly 46.5mm in front of the sensor.

“The guts of a Quicktake 150 camera is the most complicated electronic device I’ve ever seen,” explains Benchoff on his blog post.

“It’s a master class in electronic design. Inside, there are two double-sided PCBs, loaded with components. In between those ‘main’ PCBs are other boards, one of which is the board housing the CCD sensor.

“Mixed in with all of this are two optical paths, one straight through the camera for the viewfinder, and a second for the camera’s optics. The optical path features six lenses and a combined shutter/aperture device. This is an absurdly complex device.” 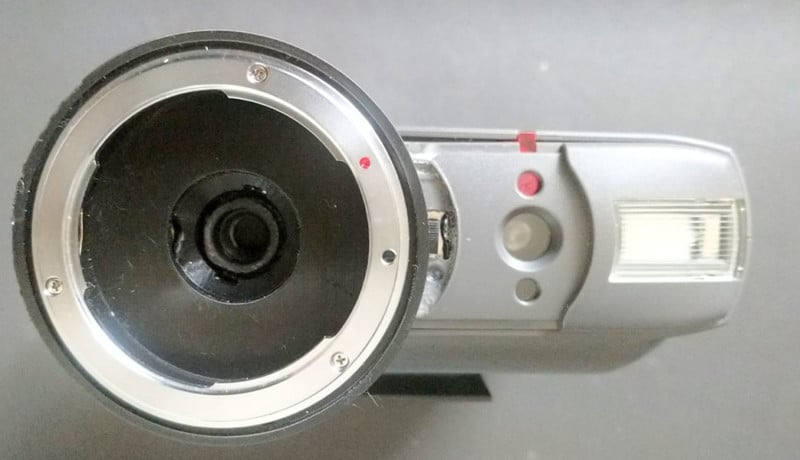 Benchoff explains that the adapter is 3D printed but the metal hardware that mounts the Nikon lens is not.

“These parts were taken from an off-the-shelf C-mount to F-mount adapter,” explains Benchoff.

“The springs and plate simply screw into the plastic (PLA) parts. Because the stock Quicktake optical path includes an IR blocking coating, I had to add a UV IR cut filter to whatever lens I use with this camera.”

Why Would Anyone Do This?

Benchoff says that the appeal of mounting a Nikon lens on an Apple Quicktake is the crop factor. The size of the CCD sensor is 6mm and his Nikon lenses are designed for a 35mm camera.

“I get a very, very long lens, even using a 50mm Nikkor lens,” explains Benchoff.

“The effective crop factor is about 7x, meaning the 50mm lens turns into a 350mm lens, making for some very long shots.”

The DIY photographer points out that if he put a 200mm lens on his contraption he would “basically” have a telescope.

“Of course, the light sensitivity and resolution is terrible, so keep that in mind,” he adds.

There is no LCD on the mid-1990s Quicktake and it dictates that the photographer must use an automatic shutter and aperture.

The camera comes with a fixed focal length of 50mm and can store eight photos on the Quicktake 100, or 16 on the Quicktake 150 at the 640×480 resolution. The user had the option of doubling the number of stored photos if they chose the 320×240 option.

To view photos, the shooter must connect the camera by serial to a very old computer. This means a pre-OS X Mac is needed to view the images.

“The camera has extraordinarily low light sensitivity, and taking pictures in twilight or indoors results in a dull, underexposed image. This is a terrible camera,” adds Benchoff.

Despite all of its shortcomings, Benchoff thinks that the Quicktake does take nice photos in daylight.

“I would characterize the images as being like oil paintings, cloistered away in an attic for a century or so, until the varnish oxidizes,” he says. 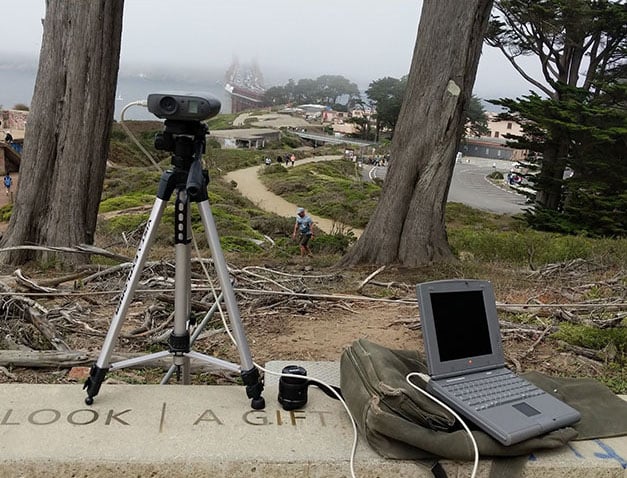 To actually take a photo Benchoff uses a Powerbook Duo 300c with System 7.5.5. to download the photos to see if his shot was any good. From there he reframes and tries again.

“It’s hard, and I had to rebuild a few Powerbook Duo batteries to make this setup portable,” he adds.

To celebrate the project’s success Benchoff made his very own Instagram clone, 640by480, where he posts photos from what has to be the world’s only Apple Quicktake 150 that takes Nikon lenses.

Benchoff’s blog can be seen here.