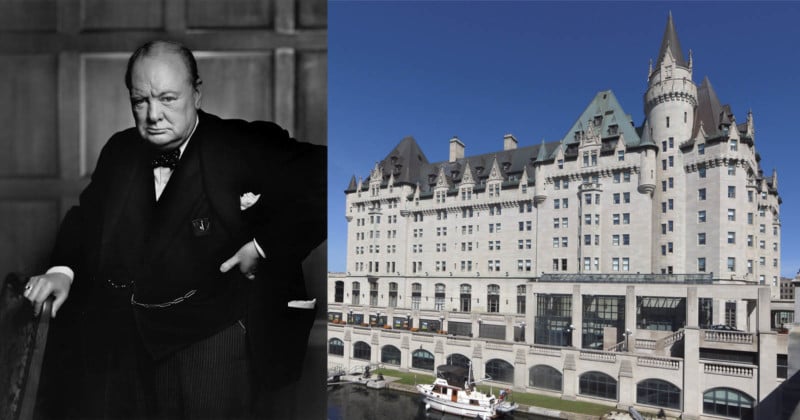 One of the most famous portraits of Winston Churchill from the Château Laurier Hotel in Ottawa has been swapped out with a fake. It is not clear how long the original has been missing.

Police are currently investigating what is being referred to as an “art heist” after an employee noticed something amiss with the portrait that usually hangs in the hotel’s Reading Lounge. The frame around the photo did not match the other five portraits in the room — all of which were taken by Canadian-Armenian photographer Yousuf Karsh — and after the hotel contacted Jerry Fielder, who oversees Karsh’s estate, the signature was found to be a forgery.

“I’ve seen that signature for 43 years. So it took me just one second to know that someone had tried to copy it,” Fielder tells the Guardian. “It was a fake.”

The print of Churchill had hung in that position for 24 years at the hotel, which Karsh and his wife lived in for a period of 18 years during his life. The hotel had been gifted 15 original works by Karsh, six of which were on display in the lounge. All of the portraits have been removed until they can be properly secured in light of the theft.

“We are deeply saddened by this brazen act,” Geneviève Dumas, General Manager at Fairmont Château Laurier, writes in a statement. “The hotel is incredibly proud to house this stunning Karsh collection, which was securely installed in 1998.”

While the exact timing of when the portrait was stolen isn’t known, Karsh’s estate tells PetaPixel that they have narrowed the timeline of the theft down to between December 25, 2021, and January 6, 2022.

“I couldn’t believe that anyone would do this,” Fielder told CBC Radio’s Ottawa Morning earlier this week. “It had been there for so long and had been such a part of the hotel. It was shocking and very saddening.

“I would like [whoever took it] to give it back, but I don’t think that’s going to happen.”

CBC reports that Michel Prévost, president of La Société d’histoire de l’Outaouais, was not able to provide a value for the portrait, but adds that no prints of Karsh’s work have been allowed since his negatives were given to the Library and Archives in Canada in the 1990s.

The fake portrait has since been replaced with a note from the hotel informing guests of the heist and asking the public for information.

“Fairmont Château Laurier has discovered that the famous portrait of Sir Winston Churchill’s frame did not match the other Karsh frames that are located in the Reading Lounge, after removing the photograph that was not hung properly,” the note reads. “Upon further investigation and a confirmation from Karsh Estate, it was found that the photograph was replaced with a copy of the original.

“The Fairmont Château Laurier team is collaborating with the Karsh Estate in this matter, and has informed the local authorities. As a precautionary measure, the remaining photographs located in Reading Lounge will be removed until they can be secured properly.

“Karsh portraits are part of the hotel’s history. Mr. and Mrs, Karsh lived at the hotel for 18 years. Mr. Karsh also operated his studio from the hotel from 1972 until closing in 1992.

“Fairmont Château Laurier is asking the public to share any information they may have to the local authorities.”

The Roaring Lion is considered to be one of the most iconic portraits ever shot, and it even appears on the Bank of England £5 note.

The photo is actually one of at least two portraits Karsh took of Churchill during a session. The other, less famous photo shows a more jovial Churchill but has not become nearly as famous as the more gruff, stern portrait that has perhaps become the most well-known image of the British Prime Minister.

The portraits were captured on December 30, 1941, in the chamber of the Canadian Speaker of the House of Commons after Churchill delivered a speech on World War II to the Canadian parliament. Karsh was excited about the portrait session, but as the Guardian explains, when Churchill entered the room arm-in-arm with Canadian prime minister Mackenzie King, he “growled” at Karsh.

“I timorously stepped forward and said, ‘Sir, I hope I will be fortunate enough to make a portrait worthy of this historic occasion.’ He glanced at me and demanded, ‘Why was I not told?’” Karsh later recalled.

Churchill then lit his cigar and puffed it with a “mischievous air” and then relented to the photo.

“I went back to my camera and made sure that everything was all right technically. I waited; he continued to chomp vigorously at his cigar. I waited. Then I stepped toward him and, without premeditation, but ever so respectfully, I said, ‘Forgive me, sir,’ and plucked the cigar out of his mouth,” Karsh said.

“By the time I got back to my camera, he looked so belligerent he could have devoured me. It was at that instant that I took the photograph.”

Image credits: Header portrait of Churchill by Yousuf Karsh and Chateau Laurier Hotel photo by John A. Brebner and licensed under CC BY-SA 3.0.