The photo comes 100 years after National Geographic published an image of the destination back in 1922, photographed by plane:

The focus on Stonehenge this time includes imagery no one else has ever captured. Photographer Reuben Wu photographed the giant stones with a powerful light attached to a drone to capture multiple exposures of a scene.

National Geographic says this is a first for Stonehenge that resulted in layered images and the creation of truly otherworldly pictures. Nat Geo has also created an immersive high-res 3D model of Stonehenge, using more than 7K images of the site from all angles.

Wu, who had been in touch with National Geographic’s then Director of Photography Sarah Leen, spoke at a photography conference at National Geographic in 2020, and was approached for the assignment to photograph Stonehenge and other neolithic monuments in 2021, using the drone lighting technique he started using in 2016, he tells PetaPixel.

“As one of the most photographed landmarks in the world, I knew I had to show Stonehenge in a way it has never been seen before. Like my Lux Noctis project, the stones are lit from above by a powerful light, attached to a drone,” he explains.

“I love the idea of ’terrestrial chiaroscuro’, where I’m able to bring out texture and contrast by using very specific angles of light using the drone light. It allows me much more control over a scene than simply waiting and hoping for natural daylight,” Wu continues.

“With this kind of lighting, I was able to bring a new, unfamiliar atmosphere to the monument, one that felt timeless, and spoke to the potency and ancient history of the site.”

While Wu has photographed many scenes with this technique, Stonehenge was different for a number of reasons.

“There is a strong attachment to Stonehenge because it’s such a household name, especially for so many in the U.K. Many of us took rainy school field trips there in our childhood. But because of this familiarity, the perceived image of Stonehenge has always felt a little unremarkable over the years. This project presented an opportunity for me to make the monument look remarkable and extraordinary,” he says.

“We had to gain permission from the English Heritage, the Royal Air Force, and my drone pilot Zac Henderson had to pass U.K. drone pilot exams to make all of this possible. And because Stonehenge is inside military airspace, we had to call the RAF to let them know each time we were about to fly the drone.”

Even after he and his pilot were set legally, the challenges did not stop there.

“We knew the UK weather was going to be a concern, especially because you can’t fly drones in the rain or wind. This meant that we spent long hours working on location and many days waiting for the weather to improve. Luckily, we were able to photograph the cover image during a beautiful sunset and a clear starry night,” Wu says.

“You can see that the light from my drone is tilted to illuminate the stones from a distance outside the circle itself. This is because we couldn’t fly the drone directly inside the stone circle due to concerns of potential crash damage. A solution I had was to use a 40-foot telescopic pole with lights attached to it which my assistant carefully walked inside the circle as if it were my drone.”

The finished photo is a multiple exposure image made up of 25 frames that were captured over the course of about three hours. Wu says that he captured around 50 frames total in that time.

“Each frame shows the light from the drone in a different position. These are then layered in post-production to result in a final picture that shows the entire Stone henge lit up against the setting sun. I used a combination of apps such as Gaia GPS and Photopills to help me scout and plan the angle and composition,” he explains.

“I used a Phase One XF with a 150mp IQ4 back and 23mm Rodenstock lens. This allowed me to capture a very wide angle scene and maintain enough image resolution to accommodate different aspect ratios and crops.”

Wu says he also used a Sony Alpha 1 to capture the timelapse footage that was used for the moving digital cover.

“Like so many of us, I grew up reading my dad’s National Geographic magazines, and they instilled a sense of adventure and curiosity about the world we live in,” Wu says. “Photographing a place like Stonehenge for Nat Geo represents something I have dreamed about but never thought would become a reality, so to see my photo on the cover is unreal, and a huge honor.” 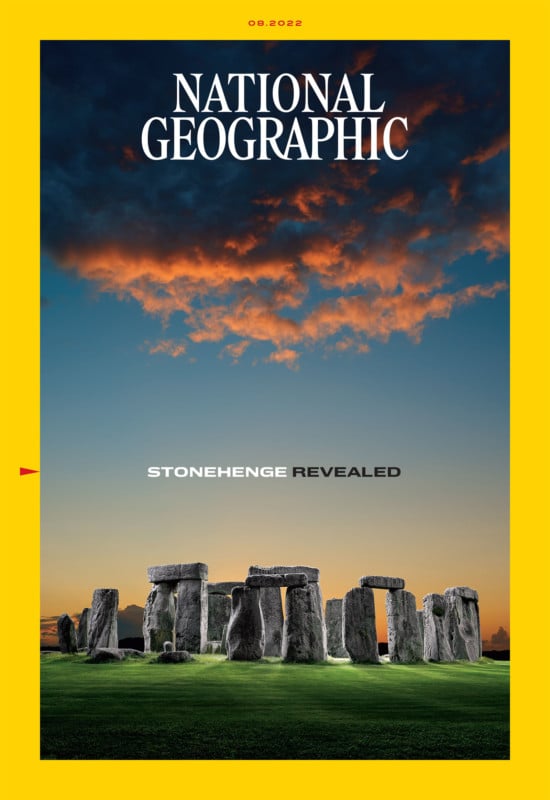 For more on this story visit National Geographic’s website or find Stonehenge Revealed on newsstands everywhere.