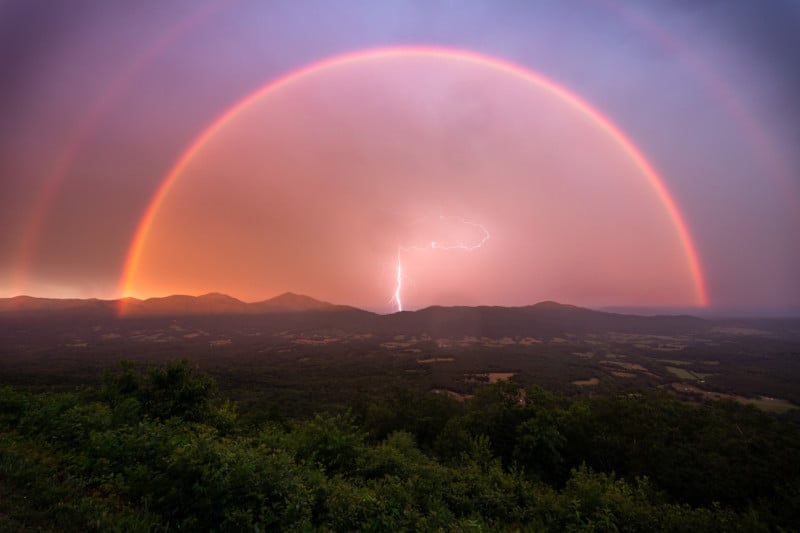 Thanks to his experience and special tools, photographer Jason Rinehart was able to position himself to capture a perfectly-timed photo of a bolt of lightning striking underneath a double rainbow.

Rinehart operates his photography business Hartlight Photography out of Buchanan, Virginia. He says that while most know him for his work in long exposure light painting, he says he’s just as passionate about capturing nature’s natural lighting that comes in the form of storms.

“I live in a pretty special and unique place for capturing mother nature at her very best, with easy access to many high vantage points that other photographers in other areas don’t have access to, the plus side of living within the Blue Ridge Mountains of Virginia,” he tells PetaPixel.

Rinehart says he was driving home in the evening while monitoring radar maps and tracking the line of storms over West Virginia when, thanks to his experience, he realized they would pass over his area of Virginia around sunset.

“The line of storms was also only about 20 to 30 miles wide, which also added to the potential to create something special once the line passed overhead as it would be illuminated by the setting sun into the blue hour,” he explains.

“I grabbed my gear from my house and headed up to the Blue Ridge Parkway to my favorite spot called Pine Tree overlook just in time to watch this beautiful shelf cloud heading my way,” he continues.

“Once the shelf cloud reached me forcing me to take cover in my car for 20 mins as the storm passed I could see to the west the sun starting to create this incredible vibrant orange, pink hues towards the east lighting up the backside of the line of storms.”

Rinehart says the rain stopped just in time as an incredible rainbow formed in front of him. He set up his Canon 6D and Sigma 14-25mm lens with a Haida rear mount six-stop ND filter and started shooting in continuous mode to give himself the best chances of capturing a lightning bolt.

“I knew right away as the rainbow started growing bigger across the sky that this was going to be something very special. I’ve captured rainbows before on the parkway but never one so bright and vibrant as this one. The color was something to witness that takes your breath away and being a photographer, knowing you captured something so special is a pretty indescribable feeling. I like to think in these types of circumstances and moments that words are unnecessary because the image now tells the story,” he says.

“The next thing that happen was this bolt dropping right out of the sky so perfectly framed within this beautiful rainbow and all I could do was just smile once I heard my shutter stop knowing I just captured exactly what I put so much time and energy into.”

Rinehart says it is a beautiful thing to be passionate about something enough to share it with the world, and moments like the one he experienced here are those that he says help him feel the most alive.

“I often tell other people that attend my workshops I do throughout the year that some of the most successful landscape photographers in the world never leave within a 50-mile radius of where they call home. The reason behind this is that you become tuned to your environment. You learn what light produces what types of conditions, at what times, what movement of weather creates certain moods of light, and how these things result in what types of images you capture.”

Rinehart says that knowing your environment is just as crucial to a successful photo as patience and preparation, and the combination can help put photographers in a position to capture amazing combinations of natural events, like his photo of a rainbow and lightning bolt together.

“It felt as if I was exactly where I was supposed to be at the exact time to capture the perfect moment,” he says.