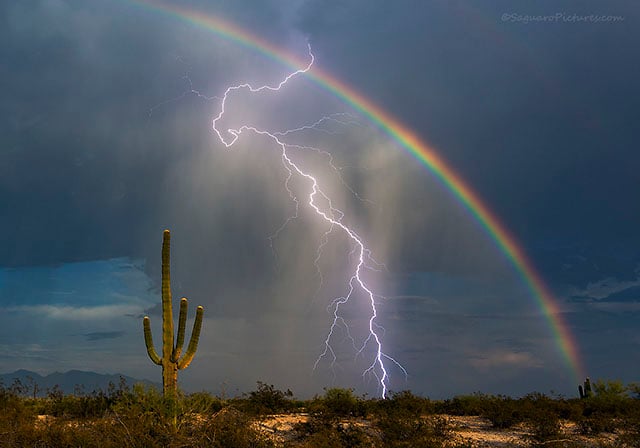 Tucson, Arizona-based photography enthusiast Greg McCown recently managed to capture a shot of a lifetime. While shooting landscapes near the small town of Marana, Arizona, McCown snapped this beautiful photo showing both a lightning bolt and a rainbow in the sky.

“After years of trying I finally got my lightning and rainbow picture,” McCown writes.

After getting caught in a heavy storm while out shooting with some friends, McCown noticed a rainbow and started driving toward it. He found a clear scene that was free of telephone poles and other distractions, and captured the photo above as the storm was fading away.

“This was the last bolt to strike before the storm dissipated into nothing,” he says.

McCown tells PetaPixel that he was shooting with a Nikon D600, a Nikkor 28-80mm lens, a tripod, and a AEO Micro 4.0 lightning trigger. Settings were: f/8, ISO 50, 1/125, and 28mm. Post-production included minor cropping, the removal of a few dust specs, and slightly increased contrast. “This photo really didn’t need much,” McCown tells us.

He’s currently selling prints of the photo over on his website.

Image credits: Photographs by Greg McCown and used with permission