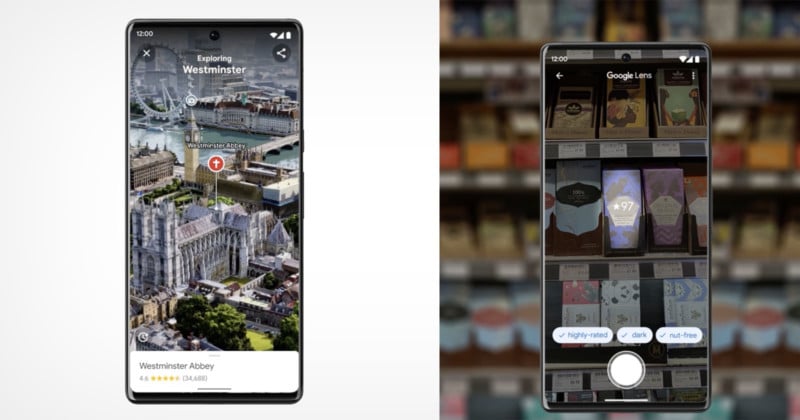 Google has expanded the immersion of its Maps app by combining street view with aerial imagery. It also showed a coming technology that utilizes a smartphone camera to provide information on real-time situations.

Google’s Maps enhancements make the application significantly more immersive thanks to an artificial intelligence-powered combination of known routes and aerial imagery. A custom slider lets users adjust for time of day and even weather conditions. The result is that those who search for directions can almost fully experience an area before they even get there.

Moving from the aerial point of view, users can slide down to the street view in one smooth transition and get a three-dimensional look at any area in order to explore nearby restaurants and businesses, complete with helpful information, like traffic conditions. Users can even get a peek inside a restaurant before booking a reservation.

The new features will be available not only on the desktop but also through the Google Maps mobile app, making navigation not only easier but also experiential. Google plans to roll out locations such as Los Angeles, London, New York, San Francisco, and Tokyo later this year and bring on more cities as the technology matures.

The maps app is also going to take a user’s carbon footprint into consideration when providing directions. With eco-friendly routing, users can request the most fuel-efficient route, rather than the fastest or shortest.

Since it was launched earlier this year in the United States and Canada, eco-friendly routing has been used to save travel 86 billion miles and an estimated half a million metric tons of carbon emissions — the equivalent of taking 100,000 cars off the road. These results are impressive and only take into consideration two countries. Later this year, Google plans to roll out eco-friendly routing in Europe, which could double the savings in carbon emissions.

Moreover, LiveView in Maps provides popup directions in augmented reality (AR) with pointing arrows, which can be very helpful when navigating tricky indoor areas, like airports, malls, and train stations. The AR feature, known as global localization, is also going to be made available as part of Google’s new ARCore Geospatial API development kit, giving app developers. Developers for apps like Telstra and Accenture are already using the GL feature to help sports fans and concertgoers find their seats, travel to the nearest concession stands and restrooms, and game designers are using the feature to provide realistic and immersive gameplay around real-world conditions.

In the largest update in Google’s history, the company is deploying Global Localization to provide more information with search. By using a mobile device, users can not only search for something visually but also get popup information in augmented reality based on what the camera sees. The new feature is called multi-search and will allow users to search for ingredients based on an image of a particular dish, or find who makes it nearby.

Another feature that’s just over the horizon is called “scene exploration,” which will use multi-search when a user pans their camera and instantly glean insights about multiple objects in a wider scene.

“Imagine you’re trying to pick out the perfect candy bar for your friend who’s a bit of a chocolate connoisseur. You know they love dark chocolate but dislike nuts, and you want to get them something of quality. With scene exploration, you’ll be able to scan the entire shelf with your phone’s camera and see helpful insights overlaid in front of you,” Google explains.

Scene exploration isn’t launching today, but the company says it plans to bring it to devices “in the future.”