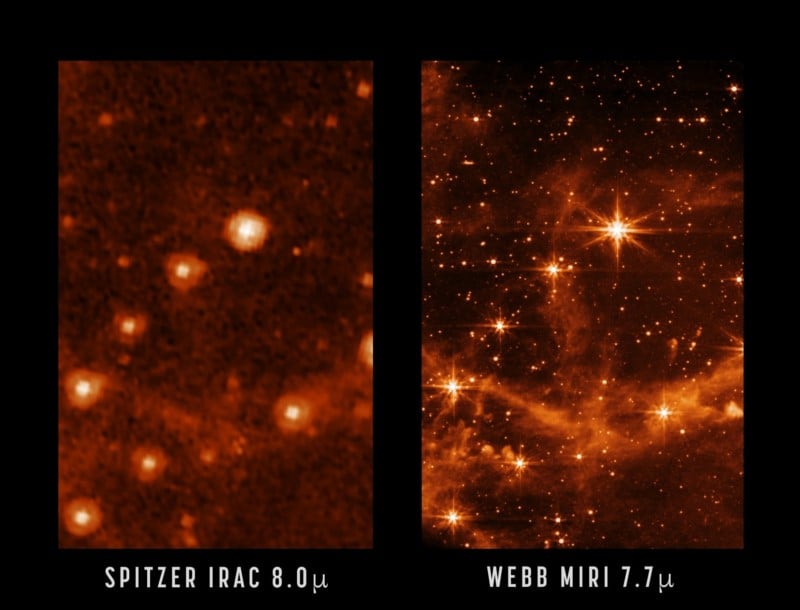 MIRI, the Mid-Infrared Instrument, is Webb’s coldest camera. This test image shows part of the Large Magellanic Cloud, a small satellite galaxy of the Milky Way which provides a dense star field with which to test Webb’s performance.

NASA published the resulting image with a capture taken by the Spitzer Space Telescope Infrared Array, a retired telescope that was the first to provide high-resolution images of the near- and mid-infrared.

“Launched in 2003, NASA’s Spitzer Space Telescope was the fourth and final addition to NASA’s Great Observatory program,” NASA explains. “Spitzer’s mission was to become NASA’s premier infrared light observatory, offering astronomers the chance to study the universe in this critical part of the electromagnetic spectrum of light with unprecedented clarity and sensitivity.”

Spitzer was decommissioned on January 30, 2020, and while it was responsible for many incredible observations, side-by-side with these test images from Webb, it’s clear how much better the new telescope’s imaging system is.

Webb has a significantly larger primary mirror and improved detectors that allow it to capture images with significantly better clarity than Spitzer was able. In this comparison image, Webb’s MIRI image (at 7.7 microns) shows the interstellar gas in remarkable detail, far more than available with Spitzer (at 8.0 microns).

“Here, you can see the emission from ‘polycyclic aromatic hydrocarbons,’ or molecules of carbon and hydrogen that play an important role in the thermal balance and chemistry of interstellar gas,” NASA says. “When Webb is ready to begin science observations, studies such as these with MIRI will help give astronomers new insights into the birth of stars and protoplanetary systems.” 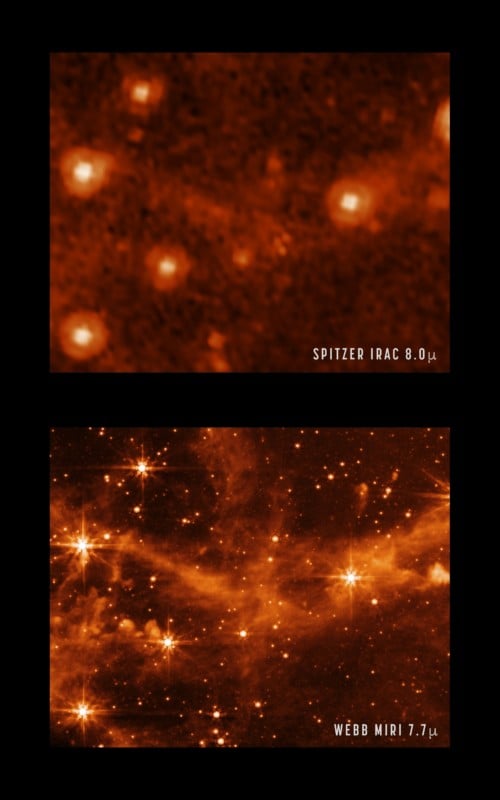 The James Webb Space Telescope completed mirror alignment on April 28 and is now able to capture sharp, perfectly crisp images. Webb has performed better than the best expectations. Webb’s mirrors are directing fully focused light that is collected from space to each instrument, and every one of them is successfully capturing images using that light.

Webb is on track to perform its first scientific observations this summer.