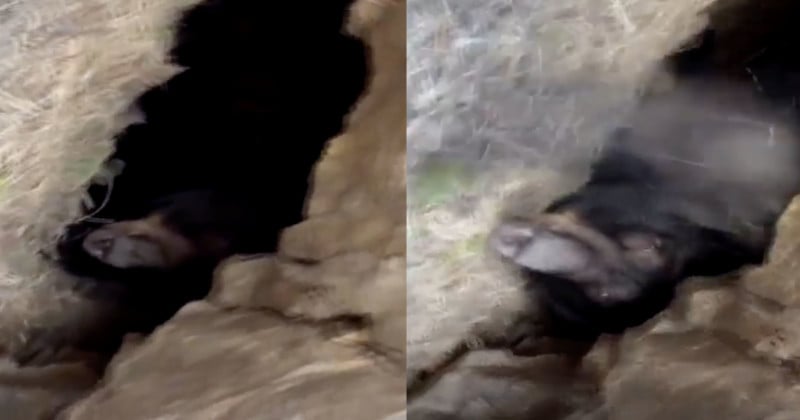 A video posted to TikTok that depicts an influencer disturbing a bear in its den while trying to capture it on camera is under investigation by Canada’s Alberta Parks officials.

According to Global News, bears are starting to emerge from their winter hibernations and some are making their way into residential areas. While that is expected, it doesn’t excuse unnecessary interaction with the creatures in their natural habitats.

In the video that was posted to TikTok but has since been removed (along with all evidence of the original profile), a person can be seen climbing toward the mouth of a bear’s den in an attempt to capture footage of the creature, only to be met with a violent response from the animal. After the bear swipes at the person, they can be seen running away.

“Someone who is approaching or entering a den is certainly putting themselves at greater risk of being attacked or interacting with the bear. It might defend its den. We don’t know if that bear had cubs in the den,” John Paczkowski, human-wildlife coexistence team lead with Alberta Parks in Canmore, tells Global News.

Former Banff National Park Supereindentent and author of the book Bears Without Fear says that it’s important to consider the interaction from the bear’s perspective.

“If you look at it from the bear’s point of view, that is a bear that is scared,” he says to Global News. “It’s cornered and it’s striking out in fear. None of that needed to happen if the photographer would’ve shown respect and left it alone.”

While the person who captured the video appears to make it away safely, experts argue that the interaction will stick with the bear for some time. After such a stressful experience, which it will tie to the scent and appearance of the human, it is more likely that this bear will become a hazard.

Recently, an “influencer in the wild” decided to be a bad influence, posting a video approaching a bear den, resulting in the bear swatting at them.

But that’s not the only issue. The health of the bear also needs to be considered and the unnamed photographer/influencer could also have harmed the bear, as the stress of the incident puts undue strain on the bear’s weakened state.

“The bears don’t need the extra agitation. They are kind of running on empty at that point. They just survived four or five months in the den,” Packowski says.

“It just decreases their fitness. They are really dependent on making sure they have enough calories to get through the year, so they don’t need to be unnecessarily burning off calories because of some sort of human disturbance.”

Global News says that under the Wildlife Act in Alberta, disturbing a bear is a criminal offense which may explain why the original video and associated profile are no longer appearing on TikTok.