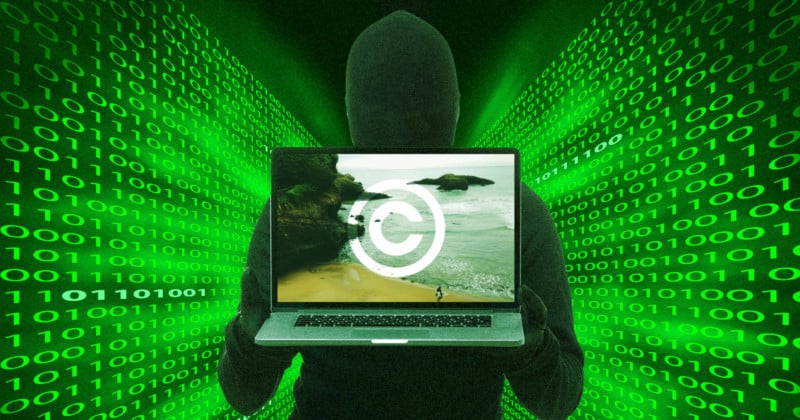 A Swedish photography magazine was recently contacted by lawyers who claimed that a photo it downloaded from the free photo service Pixabay violated a client’s copyright. But it turned out the law firm and the client were both fake, and the real photographer had never uploaded it to Pixabay either.


After it was approached by lawyers that claimed to represent the owners of a photo it had downloaded from Pixabay, Kamera & Bild decided to do a bit of digging. What it discovered was a trail of fake identities and websites. The result is a convoluted tale of how the commonplace occurrence of stolen imagery is being turned into a strange new online scam that isn’t even looking to steal money, but online clout.

The photo in question depicts a surfer on a beach in Biarritz, France. It was originally captured by photographer Zak Suhar and was shared on his Instagram in June of 2016. But Suhar never uploaded it to Pixabay; that was done by a company called Stocksnap.

Suhar believes that the photo was posted on Snapwire — a site where photographers can upload and sell their photos — years ago and from that point was repeatedly downloaded and re-uploaded across multiple platforms, all without his permission.

“In a perfect world, I really want to get paid for the use of all my photos,” he tells Kamera & Bild. “It is a tough battle between the value of exposure versus monetary value. In the age of social media, it’s tough when photos are stolen all the time.”

Suhar’s not wrong: photos are stolen all the time and there is very little recourse for them.

“Our license includes that all users who upload photos agree that they own them and that they are not stolen. But we do not have a way to check if an image is copyrighted or not, unless it is reported or if the original owner contacts us,” Pixabay tells Kamera & Bild.

“It’s kind of hard to check all contents, but as much as possible once we receive a report we make sure to ban the user who violates our terms. In these times, material is easy to steal, especially when everything can be found on the internet.”

A Scam with an Unusual Goal

While a stolen photo is, unfortunately, not groundbreaking news, the photo ended up in the center of a strange new scam where the target isn’t extorted for cash, but for clout.

Kamera & Bild was contacted by the law firm Arthur Davidson Legal Services, which claimed to be an agent for a company called Surf Gear Ltd. According to email communications, Arther Davidson claimed the photo belonged to the surf shop that operates under the website CheapSurfGear.

“I’m contacting you because your site contains content that has infringed on a copyrighted image owned by our client Surf Gear Ltd.,” the email reads. “The use of this image has been published without the correct byline.”

The email, which can be read in full on Kamera & Bild, continues with a litany of references to copyrights and laws and adds that a “case” has been opened against the publication. It concludes with a threat: if the publication doesn’t abide by the requests therein, the law firm will take legal action.

“It sounds threatening. And it is of course meant to be, to make us feel doubtful about whether the image publication is correct or not. In a way, the law firm is successful, since we feel compelled to investigate the matter,” Kamera & Bild says.

Strangely, the law firm wasn’t seeking to have the image taken down nor were they seeking monetary compensation. Instead, the law firm says that its client simply wanted to be properly noted with a proper citation and link.

“Our customer, Surf Gear Ltd, is pleased that their image is being used and shared over the internet,” the law firm continues. “But a proper byline is required for continued use. Surf Gear Ltd must be added below the image or in another suitable place on the infringing site, with a link to cheapsurfgear.com.”

As Kamera & Bild explains, publications and websites with strong clout are targets for companies and brands that want to increase their own clout. Google SEO is based in part on references and backlinks from other websites. The more clout a website that provides a backlink has, the more clout the linked site receives which has ramifications on how high up a site appears in Search.

“Every day, a handful of emails come to Kamera & Bild with suggestions for so-called ‘collaborations,’ where they want us to put in various links for a small amount of money. The result they want to achieve with the links is to get a higher ranking on Google,” the publication explains.

PetaPixel can confirm that it too receives hundreds of emails a week of similar nature, all of which are ignored.

But this scam is working on a different level. Instead of asking politely for a link insertion or offering to pay for a backlink, this scam is attempting to scare publishers with legal threats into providing the link.

“This threat probably works from time to time,” Kamera & Bild says. “There is a big question mark about whether all images on, for example, Pixabay, are there in accordance with the photographer’s wishes. Therefore, some image publishers will probably be unsure of what is valid and take the safe before the unsafe and insert a link to the copyright holder, something that would make the law firm drop the case.”

Kamera & Bild’s research led them to discover that not while Arthur Davidson Legal Services looks legitimate at first, close inspection indicates that it is a fake organization, and many of the photos of the “lawyers” on the website look like they have been generated with artificial intelligence.

Digging deeper, the “client” Surf Gear Ltd. also appears to be a “complete scam.” Good reviews appear to be AI-generated, and those that are not call out similar legal threats to the ones levied against Kamera & Bild.

In short, the entire purpose of the scam that targeted Kamera & Bild was apparently to prop up the validity of other scam sites in the eyes of Google. The more high-ranking sites that the scammer can convince to link to his scam sites, the more likely the scammer will appear in search results where he can then scam money from unsuspecting buyers.

Since Kamera & Bild‘s report, the Arthur Davidson Legal Services website has disappeared, though the surf shop’s website is still operational. PetaPixel will not be linking to it for obvious reasons.

It’s not a particularly complicated scam, but it is rather elaborate. It is very possible that operations like Surf Gear Ltd. reach out to hundreds of websites a day through automated means by scraping sites like Pixabay or Unsplash, reverse image searching for sites using those photos, and attempting to scare those sites into providing backlinks by scaring them into thinking the photos were stolen.

For photographers, it is entirely possible that photos never intended to be shared as free stock images will be found on these stock sites and used to lie to unsuspecting publications and brands. That is exactly what happened to Zak Suhar, and for publications less astute than Kamera & Bild, it very well may work.

Kamera & Bild’s full report can be read on its website.