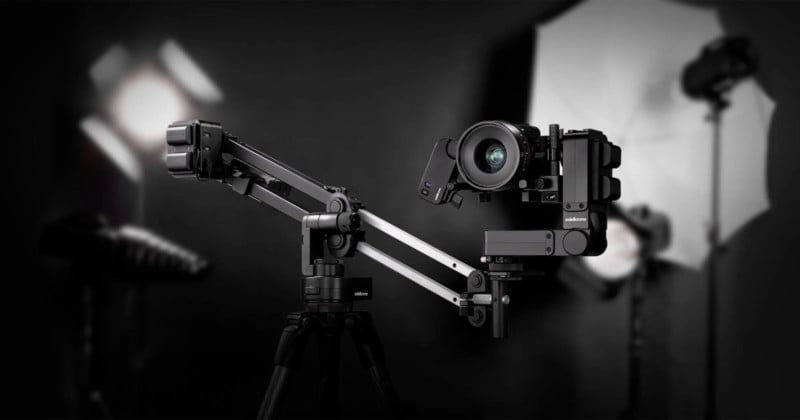 Edelkrone has announced an upgrade to the JibONE motorized jib platform that expands its wireless range as well as makes it lighter and more compact.

The company has previously said the JibONE is the most portable multi-axis jib available, but has expanded on that claim by making it even more capable. The JibONE v2 has an OLED screen, expanded Bluetooth range, and adjustable vertical, horizontal and diagonal operation. The JibONE operates along a 1.6-footpath and can be configured to move at a speed between eight and 140 seconds

The jib works with all of Edelkrone’s optional pan and tilt heads including the HeadPlus, HeadOne, and PanPRO, which can give the JibONE motion control along up to five axes. The company says this opens up a host of advanced features including live targeting between up to three preset targets, focus control while switching between targets, and a sequencer feature that daisy-chains multiple poses together for more complex and loopable camera motions.

Edelkrone says it also listened to user feedback and designed a physical power button along with improved power management functions for longer battery life. It also saves the camera’s position so it doesn’t have to reset. The JibONE is controllable either wirelessly through the Edelkrone app, with the optional Edelkrone controller, or through a third-party remote that supports a wired LinkPort connection.

The app is available on both the iOS app store and Google Play, and can be used to program custom movements for multiaxis motion control by pressing and holding on any key pose controls, and then revisiting that control to recall the motion. Pressing the key pose button twice will set the device to perform a repeatable loop function for longer shots. Speed and transition acceleration can also be adjusted, and there is also a timelapse function.

Other features include ultraquiet operation and the ability to reconfigure the JibONE upside down. It accepts multiple power options that include Sony, Gold, and V-Mount battery plates along with an optional AC adapter. The JibONE V2 can collapse down to 24-inches for compact storage and fits into a handy custom backpack for easy transport.

The JibONE is available to pre-order for $1,000 until the beginning of May, at which point the company plans to increase the price slightly.