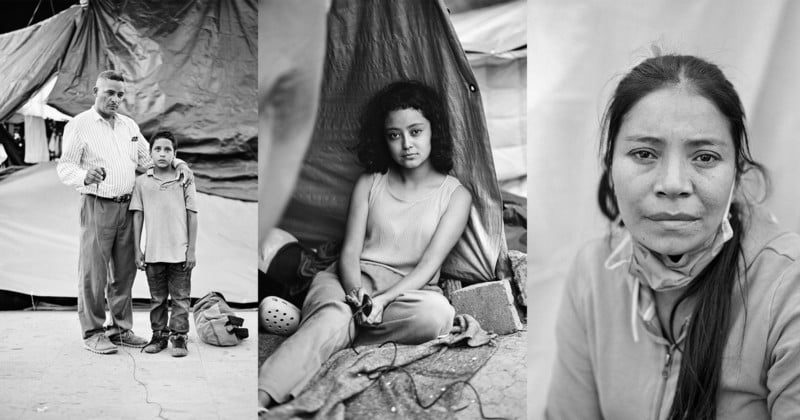 The Sony World Photography Awards 2022 has announced this year’s winners that span numerous categories. Photographer Adam Ferguson was honored with the Photographer of the Year title for his unique Mexican migrant self-portrait project.

Winners were revealed in a celebratory announcement video featuring interviews and reactions from the winning photographers. Winners will also go on to see their work exhibited at Somerset House, London, from April 13 to May 2, 2022, displayed alongside other winning and shortlisted photographers.

The coveted Photographer of the Year title was awarded to Adam Ferguson from Australia for which he received a $25,000 cash prize and a Sony digital imaging kit. His emotional photo series, titled “Migrantes,” moved the judges and also won in the Portraiture category.

The series consists of black and white self-portraits in Mexico, taken as they wait to enter the United States. Ferguson set up the scene for each photo by mounting a medium format camera on a tripod with a cable release and stepping back, allowing the participants to pick a comment to capture and contribute to documenting their lives.

“What Adam Ferguson has done on the US / Mexico border with migrant families and individuals is deeply compassionate and moving,” says Mike Trow, Chair of the 2021 Professional competition. “This set of portraits speaks volumes about how moral intentionality and respect can help avoid some of that sense of manipulation and invasion of the private which photography is often accused of.”

“By giving his subjects the shutter release Adam hands a certain power to the sitter to make that decision on how to be perceived,” he adds. “These photographs are beautiful, meaningful, and kind.”

Ferguson tried to make images that inspire empathy, rather than sympathy and hoped to create a story that felt more human, relatable, and honest.

“I’m grateful to the brave and resilient individuals who agreed to work with me, and receive this award on behalf of them also,” he comments. “Winning the Photographer of the Year award gives this story another life. It allows a new audience to connect with the important stories of the individuals who shared their story with me.”

The Winning Photographs of 2022

The overall winning entries for the Professional, Open, Student, and Youth categories can be seen below:

The full collection of shortlisted and winning entries can be seen on the Sony World Photography Awards website. The winning photos can also be viewed through a virtual exhibition experience.