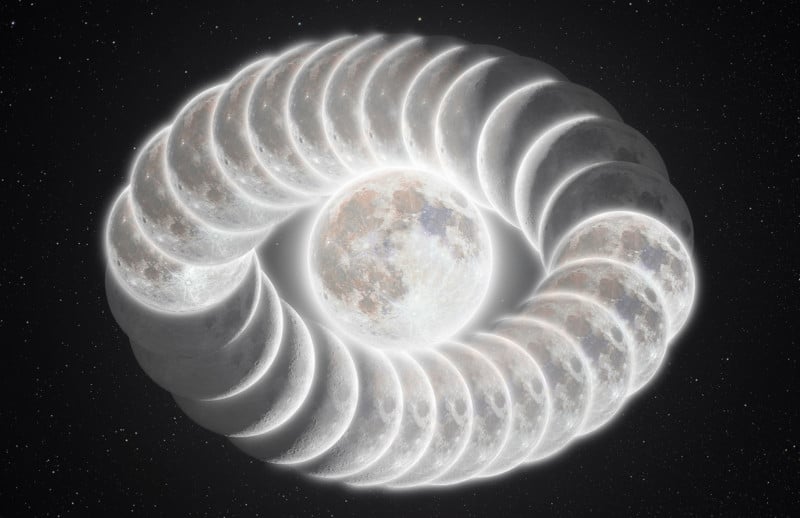 Astrophotographer Andrew McCarthy shot over 2 million individual photos to show how the Moon appears to dance or “wobble” in the sky when observed from Earth over the course of a month.


McCarthy set out in early February to capture an entire “lunation,” or a lunar day, which occurs over the course of roughly one calendar Earth month (29.5 Earth days, to be more precise). He paid close attention to preserving both the angle and the size of the Moon as it changed over the course of that span.

The artistic image above is “the fruits of that effort in a single composite, with the sizes and angles of each moon true to how they appeared in the sky from the Arizona desert.”

Showing the Moon’s Dance in the Sky

McCarthy also created a high-resolution moving picture that shows the moon’s libration and rotation at its zenith.

“I thought the motion would tell a really nice story of the moon’s dynamic presence around Earth,” the photographer tells PetaPixel. “I’m very passionate about spreading my love for the moon, as I believe humanity establishing a man’s presence there would get more public support if everyone loved it as much as I do.”

In all, McCarthy shot over 2 million individual frames through his telescope — files that weighed in at over 12 terabytes of data.

“Each frame of the moon was a massive mosaic, not unlike moon photos I’ve done in the past, where it is stitched from many tiles, which were created from stacks of thousands of images.

“This process was repeated every 25 hours (when the moon was at Zenith) for 27 days.”

A Challenging Project to Shoot

In addition to the herculean task of traveling, shooting, and editing the photos, McCarthy also had to contend with uncertain environmental conditions.

“Planning for weather was the hardest part,” he says. “I had to travel all over the state based on the forecast, but weather in the desert can be unpredictable.

“One night had clear skies forecasted, and I ended up getting rained on. Another I was shooting through a dust storm! Postprocessing was a challenge because conditions varied from day to day, so I had to match sharpness, contrast, and noise levels from day to day, despite each image having vastly different quality.”

It’s important to note that the Moon’s apparent “wobble” is due to the observer’s perspective on Earth.

“Technically it’s not wobbling — it just appears to because of the orbital path,” McCarthy says. “The twist is due to the orbital plane not lining up with earth’s equatorial plane and the ‘libration’ where you can see the horizon come and go is due to the moon’s elliptical orbit. That’s simplified, of course.”

Lunation is available for purchase as a hand-signed limited edition print. You can find more of McCarthy’s work on his website and Instagram. You can also follow along more closely and enjoy neat perks by supporting him as a patron through Patreon.