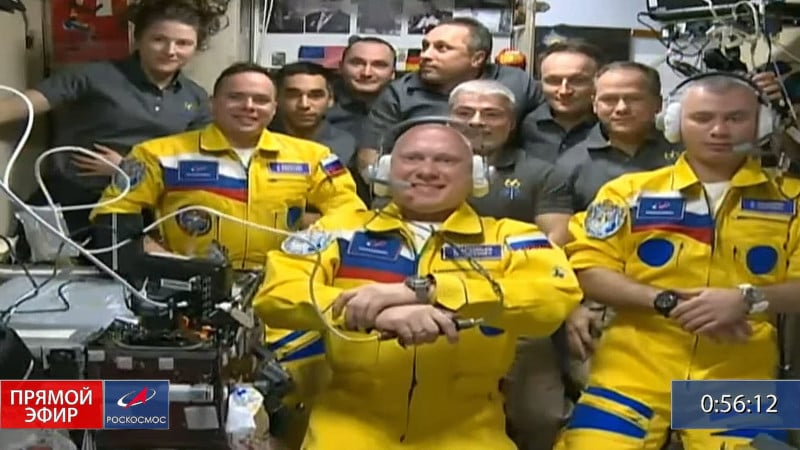 They say a photo is worth a thousand words, and it seems that’s the kind of statement the three Russian cosmonauts who just arrived at the International Space Station were trying to send in picking their flight suits. They boarded the station wearing striking yellow outfits with blue accents — the colors of the Ukrainian flag.


Update: Roscosmos has responded to reports regarding the flight suit colors, denying that there was any intention by the cosmonauts to support Ukraine in their color choice. See update below.

The Russian invasion and the US-led sanctions that followed have strained US-Russia relations and put a shadow over the decades-old collaboration between the two nations in the area of space exploration. Russian space agency Roscosmos head Dmitry Rogozin recently suggested that US astronauts use “broomsticks” to get to space after his nation put a pause on supplying rocket engines to American companies.

However, the Soyuz MS-21 spaceflight mission still went ahead as scheduled. Cosmonauts Oleg Artemyev, Denis Matveev, and Sergey Korsakov launched into space from the Baikonur Cosmodrome in Kazakhstan on Friday, traveling a little over three hours to the ISS for a six-and-a-half-month mission on the space station. It was the first Russian launch of a space crew since the nation invaded Ukraine on February 24th.

After docking with the ISS, the crew and multiple cameras already aboard watched and snapped as the hatch opened up and the three smiling cosmonauts wearing their bright yellow flight suits floated in.

There were four NASA astronauts, one ESA astronaut, and two Russian cosmonauts on the ISS, so the arrival of the three new cosmonauts increases the total crew size on the ISS to 10.

After floating into the space station, one of the first things they did was pose for photos.

The Russian cosmonauts’ entrance into the ISS can be watched at the 33-minute mark in this NASA livestream:

Yellow and Blue for the Cameras

Observers immediately noticed that the Russian flight suits were strangely reminiscent of the flag of Ukraine, which features a simple design of blue and yellow.

The yellow-and-blue flight suits were also front and center as the three Russian cosmonauts got in front of a live camera for a virtual Russian news conference.

The boarding and conference were also broadcast by Roscosmos.

Colors That Speak Louder Than Words?

In response to the Russian invasion of Ukraine, the Ukrainian flag has been flown around the world as a sign of solidarity with the country as it fights to defend itself. When asked about their choice of flight suit, however, the cosmonauts curiously explained that they had too much yellow material.

“It became our turn to pick a color,” Artemyev said. “But in fact, we had accumulated a lot of yellow material so we needed to use it. So that’s why we had to wear yellow.”

With the world’s attention focused on the ongoing war between Russia and Ukraine, however, the choice of colors was presumably not the product of mere coincidence. Images of the cosmonauts and flight suits quickly began going viral on social media and getting picked up by international news outlets.

“The Russian astronauts did not say anything that would suggest that their clothing was a political statement,” the New York Times writes. “Yet it seemed difficult to believe it was happenstance.”

NASA ISS program manager Joel Montalbano was asked on Monday whether the escalating geopolitical tensions on Earth could affect the multinational crew aboard the ISS.

“The teams continue to work together. Are they aware of what’s going on on Earth? Absolutely. But the teams are professional. They’ve trained to do a job, and they’re going to do that job.”

Update on 3/19/22: Roscosmos has denied reports suggesting that the Russian cosmonauts chose to wear yellow and blue as a statement about the war between Russia and Ukraine.

“Sometimes yellow is just yellow,” Roscosmos wrote on its Telegram channel, according to Reuters. “The flight suits of the new crew are made in the colours of the emblem of the Bauman Moscow State Technical University, which all three cosmonauts graduated from… To see the Ukrainian flag everywhere and in everything is crazy.”

Roscosmos Director General Rogozin also stated on his personal Telegram channel that the Russian cosmonauts were not sympathetic toward Ukrainian nationalists.

“Color is just color. It has nothing to do with Ukraine,” Rogozin said on Telegram, explaining that the flight suits had been made six months prior to the launch. “In these days, even though we are in space, we are together with our president and people!”

It is still curious, however, that when Commander Artemyev had a chance to publicly explain that they had picked the colors of their alma mater, he attributed the choice to having too much yellow material…