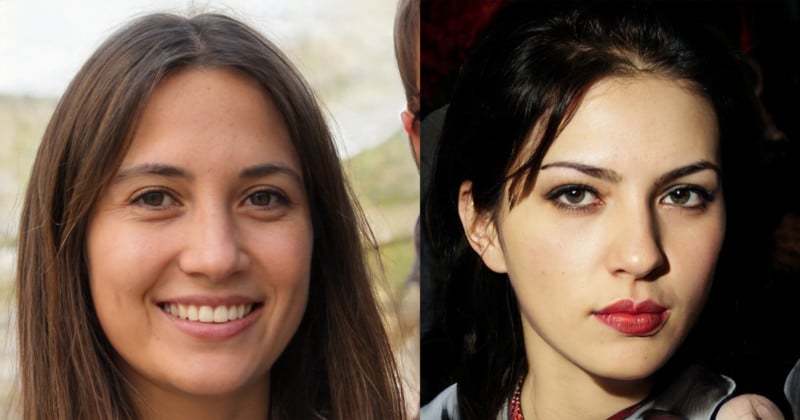 V7 Labs has created a new artificial intelligence-based (AI) software that works as a Google Chrome extension that is capable of detecting artificially generated profile pictures — like the ones above — with a claimed 99.28% accuracy.

V7 Labs is a software company that designs products made to automate visual tasks. The company says that the world relies on visual decision making and it is working towards making deep learning more robust and easier to develop so that any business can implement state-of-the-art AI from a single platform.

Alberto Rizzoli, one of V7 Labs’ founders, describes the new software as designed to help curb misinformation online. He has demonstrates the feature in a video published on Loom.

“There’s a lot of misleading content on social media these days and one of its propagators are fake profiles,” Rizzoli says. “We made a Chrome extension that is able to detect whether a profile picture is a genuinely real person or an AI-generated portrait.”

He shows how it works by checking the profile picture of a person who added him on LinkedIn recently. In a matter of clicks, the extension was able to quickly determine that she was a fake person. In that particular example, there were some telling indicators that the photo wasn’t real, such as an awkwardly placed earring and strange-looking pupils. However, these are only really noticed upon close inspection and fake profile pictures can still be quite misleading.

Rizzoli shows a second example that is far more realistic with fewer to no immediately noticeable flaws, but his plugin was able to recognize it as a fake photo with nearly 100% confidence.

He explains that many of these photos are generated on the website This Person Does Not Exist, which operates on an AI face generator that is powered by NVIDIA StyleGAN, a neural network it developed in 2018. The site was set up by a software engineer from San Francisco and is very simple to use. Upon loading the site, it simply shows a new AI-generated face. Every time the page is refreshed, a new face will appear, made from scratch out of a 512-dimensional vector.

The two photos above were generated using this process.

There are some characteristics that the AI face generator exhibits, such as someone who is very well centered in the frame of the photo and facial features. That said, Rizzoli’s software can still differentiate between a real person in a photo that looks a lot like those generated using the AI program, and fakes.

“It is something that’s growing quite a lot, especially on Amazon where dozens of book authors,” he says. “This is increasingly common at is very cheap to just create a fake persona and teach people ticked up marketing. Perhaps it is part of a larger scheme.”

They of course exist on social media as well, as Rizzoli points to one example of a Twitter user with an AI-generated face that is spreading false information about the war in Ukraine.

“This Chrome Extension will help the authorities (and regular people) spot and report profiles spreading fake news and creating informational chaos, especially in the face of the Russian invasion of Ukraine,” he tells PetaPixel.

Right now, the extension only works on GaN-generated images, so it’s not able to detect the high-quality deepfakes found in videos. At least, not yet.