During his trip to Kauai, one of the many islands in the Hawaiian archipelago, photographer Michael Shainblum captured his journey using a mix of wide-angle and telephoto lenses, making the most of the diverse natural beauty of the area.

For photographers, it can be easy to get overwhelmed in breathtaking locations while trying to document the landscape and do justice to its natural beauty. Shainblum is no stranger to photographing an area using a mix of wide-angle views and more abstract detail shots to showcase a location and does so in a recent trip to the island of Kauai.

During a hike, Shainblum starts with a tight shot, using his telephoto lens while overlooking a cliff and ridges at the bottom of the valley. The soft greenery covers the ridges and helps them separate as the light falls, creating lighter and darker shades of green throughout. 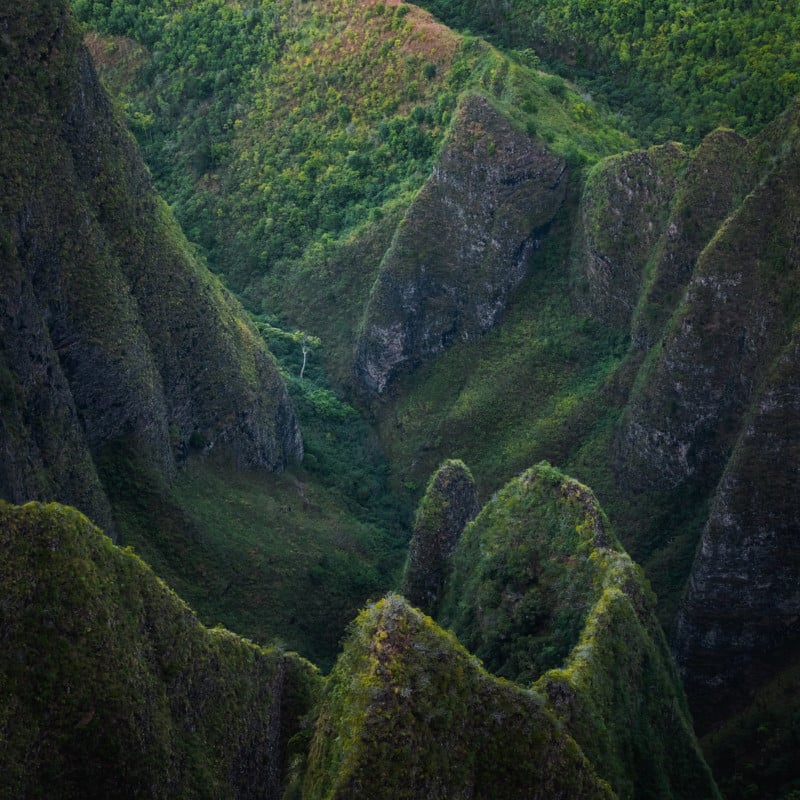 Because he was limited by the optics he had on hand, Shainblum used three horizontal shots to replicate a slightly wider angle photo than he would have been able to take with his telephoto lens, making sure to not forget the bright orange shades towards the top of the image. Compared to the single exposure, Shainblum felt the touch of vibrant orange helped to add color contrast and elevate the composition.

Although 50mm is not Shainblum’s go-to focal length for landscapes, this time he appreciated the wider perspective this lens gives compared to the telephoto. This time, without the need for a panorama, he was able to include the ridges and the surrounding orange rocks on top of the composition. 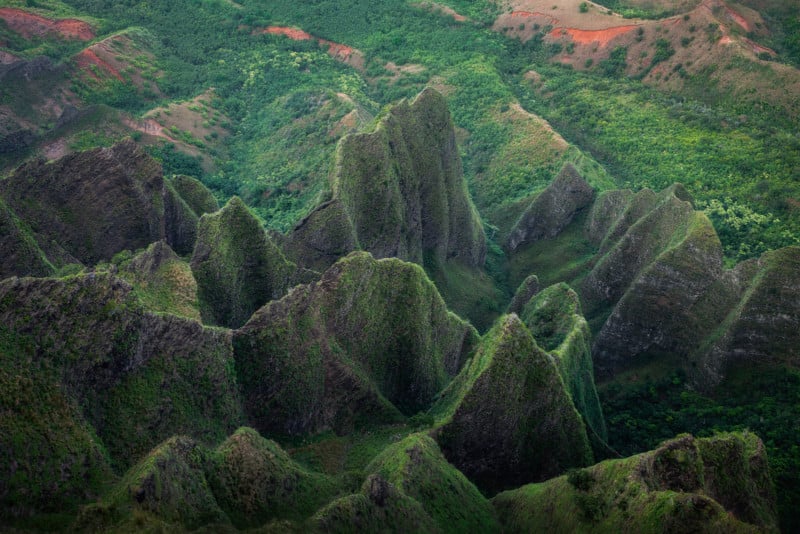 Turning his camera towards a different angle from his shooting location, he captured one of his favorite photos, below. The sunlight softly hits every ridge, creating a pleasing separation between them. 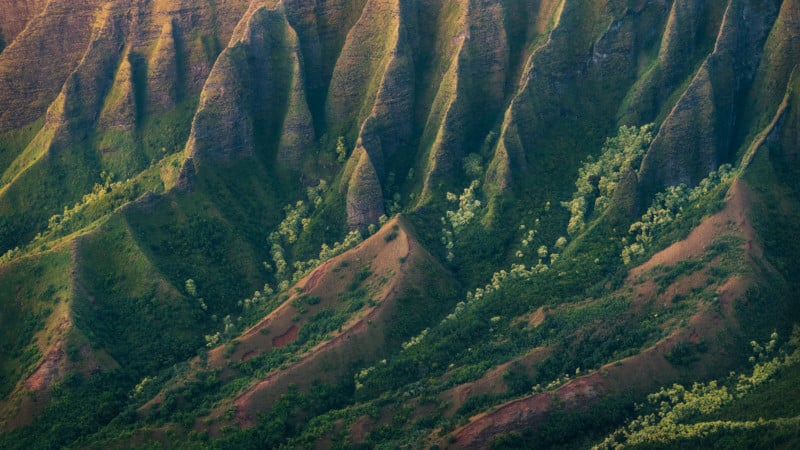 While Shainblum was visiting the island, it rained every single day. The Waimea Canyon, also known as the Grand Canyon of the Pacific, provided the perfect backdrop for rainbows that appeared out of the storm. 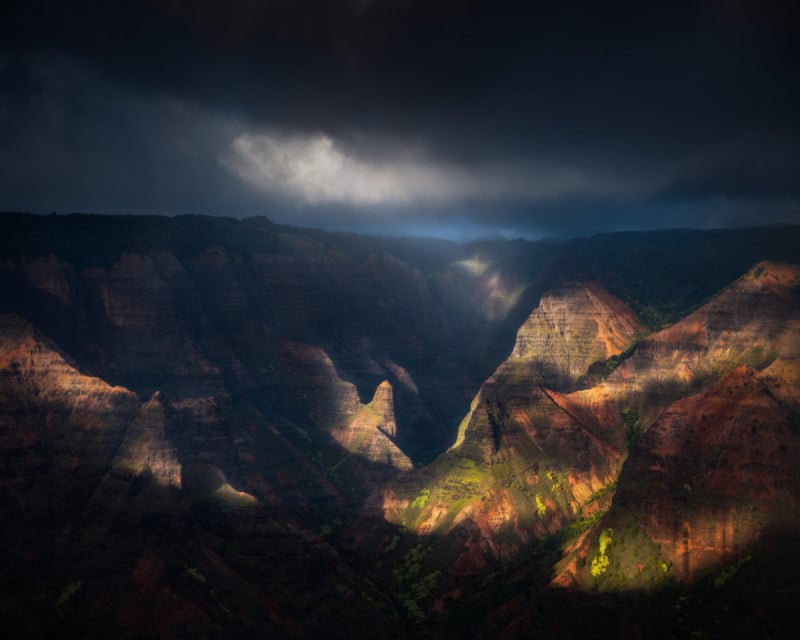 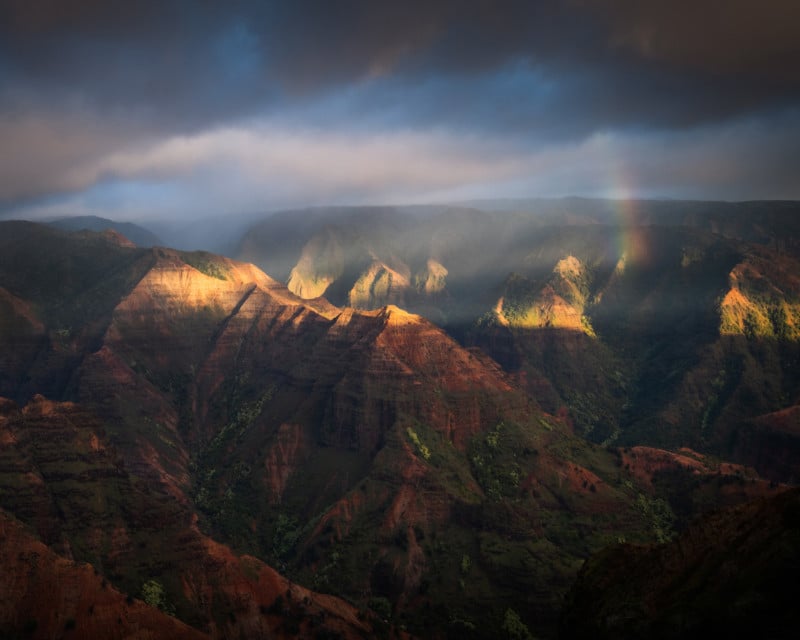 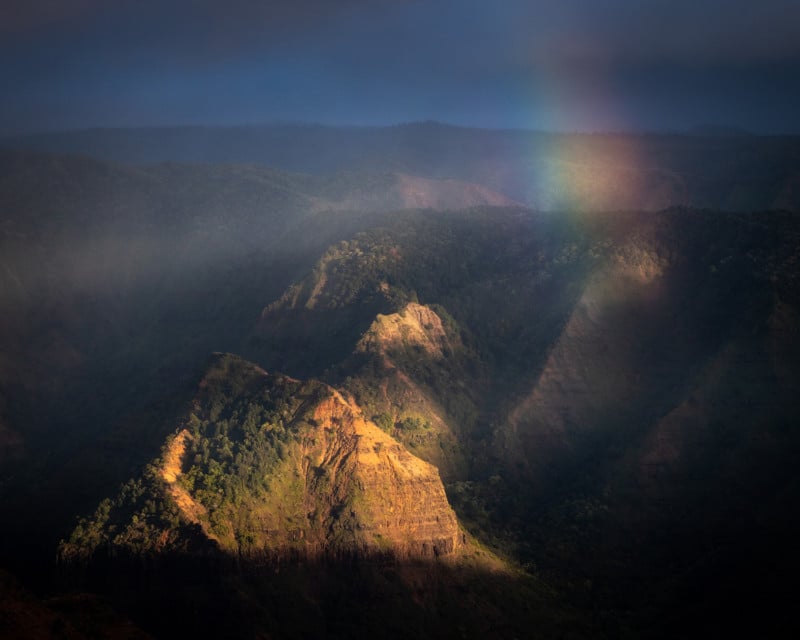 Although rainy weather conditions are not the most pleasant, waiting for the right moment when the rain stops and the sunlight comes out can create striking results as the golden sunlight covers parts of the mountains and the rainbow suddenly appears.

On his last day on the island, Shainblum decided to photograph the soft waves against the rocks on a beach, using Nikon D850 and a Nikon 16-35mm lens. The composition he picked didn’t quite fit with the frame he chose, so Shainblum again went back to the panorama technique to create his final photo, stitching multiple horizontal oriented frames together so as to include both the water and rocks at the bottom and the dramatic sky top of the photo. 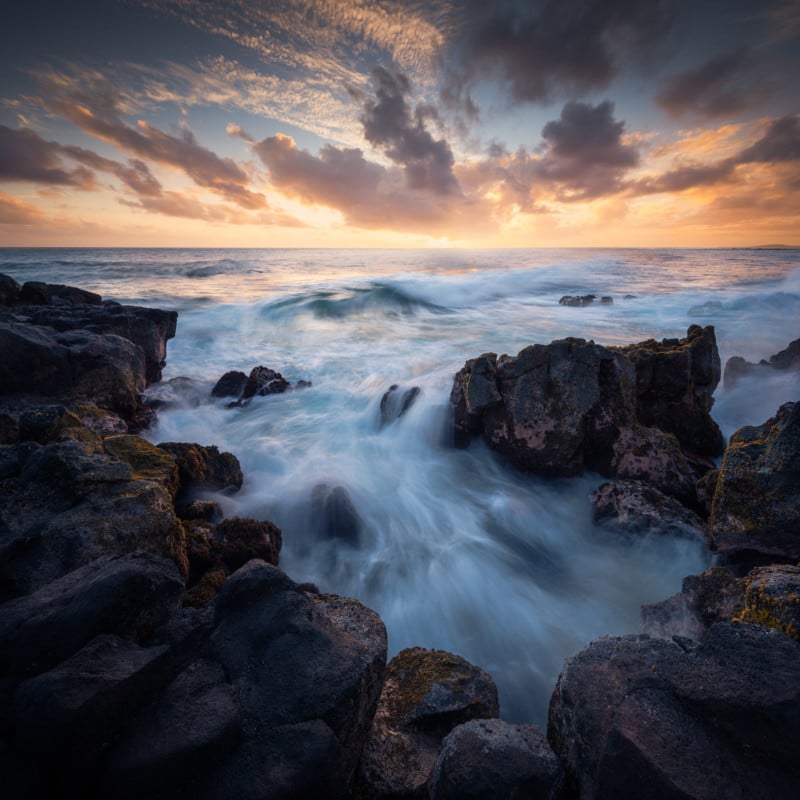 Looking back on his trip, Shainblum adds the location allowed him to capture a large variety of different types of images. Not in the race to create his top favorite images, Shainblum instead likes to approach his trips with a slightly more grounded approach. If he was able to express his creativity and enjoyed himself, that’s a formula for a successful photo trip.