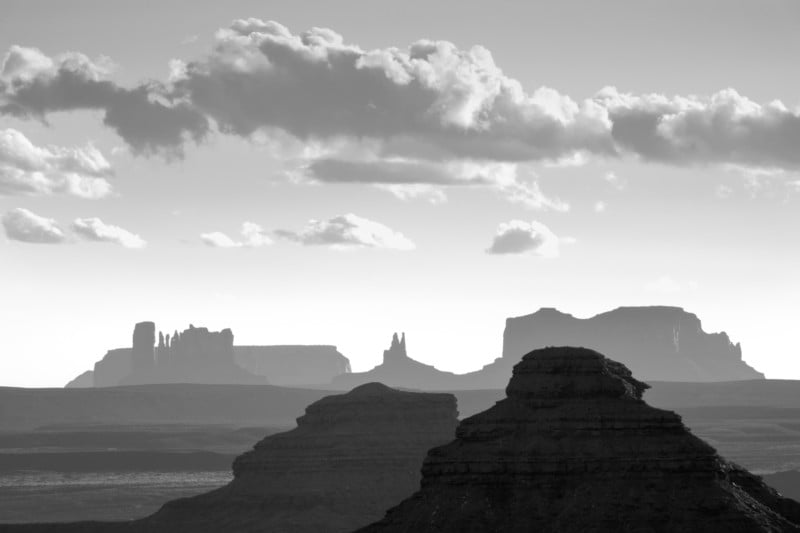 I’ve often been asked that question and it’s relevant, so let’s examine it for a while. Let’s start at the very beginning — the actual exposure of a negative.

When I’m out with my camera, I try to keep my eyes open to all possibilities, but of course, the subject matter has to be of real interest to me. I can’t force myself to photograph something that has no emotional resonance. If I try, it will be a forced image, and it will be a failure.

Sometimes I find myself in places that do not strike me as beautiful or enticing, and yet something about them appeals to me. A good example is the downtown of large cities filled with soaring skyscrapers, each of which tends to be hideous urban file boxes, and yet there can be fascinating geometrical interactions among them. Finding them is very rewarding. So, I have photographed in such urban centers with great enthusiasm, despite the fact that I find them significantly lacking in beauty.

For the most part, it is nature that draws my attention and my love. And it is in nature where I am most comfortable, both with my feelings and my photography. I don’t really “search for photographs” in nature, I just enjoy being in nature, and periodically something jumps out at me requiring further investigation without my actively searching for it. I guess you can say that it finds me rather than I find it. It’s something that catches my attention, “grabs me” shall we say, and requires some time to respond. Sometimes it’s instantaneous and I have to move quickly, for example, if there is rapidly changing light. At other times it needs a lot of thought about such things as perfecting where the lens has to be located to maximize the relationships I see in the subject.

It would seem to follow that with such careful thought put into each image, and with the further recognition that the subject matter really means something to me, that every negative I expose is printed. Of course, that’s not the case. Why not? What makes me reject some and choose others to print?

Not Every Negative is Printed, and Not Every Print is Published

It turns out that as much as I may be moved to make an exposure, when the negative is developed and proofed, giving me something to study, I have to approach it in a different manner. I have to evaluate whether the thought I wanted to convey about the subject matter has a serious chance of being conveyed. It has to continue to look good and to indicate that I can print it in a way that others will respond to. It’s much like trying to say something important. You want to use the correct words and thoughts that listeners will respond to, and that applies to talking with a single family member or friend or speaking to a large audience. So, when trying to evaluate whether an image conveys my thoughts, many get rejected. They either no longer excite me, or they don’t seem up to the task of expressing what I was after when I exposed the negative.

A significant number pass the test and are printed. At that point, another evaluation takes place. I try to view the image as if I were the audience, not the creator. I ask the simple question: Does it move me? I try to be as objective as possible, removing myself from falling in love with the image simply because I produced it. That’s not an easy task, and I have no idea how often I succeed in transforming myself from the producer to the viewer.

And then a further evaluation takes place, especially if I’m considering putting images up in an exhibit or publishing them in a book: How well do they mesh together? Beyond that is the further question of how varied the set of images should be. For example, I may decide, independently of one another, that four images are my absolute favorites. But if those four have too much in common in an exhibit or a book, it may be best to remove one or two of them, choosing others that I deem not as good individually, but that makes the set more diverse, more interesting. At that point, I’m not just evaluating the images individually, but the set as a whole.

If that seems weird, consider a sports analogy. Suppose you’re putting together a football team and you have to pick eleven players to make the best team (twelve players, if it’s Canadian football). But the three best players are all quarterbacks. You’ll be stuck if you choose all three, rather than being clever by choosing the best quarterback, and then choosing the best end to catch his passes and the best tackle to protect him from getting sacked, even if those two are not among the three “best players.”

Today, I’m in that process because of a book I’m putting together which is nearing publication. The book consists of images made throughout my career that I’ve never previously published or exhibited. Just before the pandemic hit us all, I decided to review my career 4×50-inch negatives in a systematic, chronological way. My hope was to uncover a negative or two or maybe even a few, that were worthy of printing; ones I had either overlooked or was unable to print to my satisfaction years ago. To my shock and delight, I began finding one after another, a treasure trove of photographs never before shown. The number of such images grew so large that I started thinking of putting them into a book, and now that book is edging toward publication.

It’s a retrospective of my life’s work laid out in sections, including such topics as general landscapes, forests and trees, slit canyons, downtown urban images, cathedrals of England, etc., but none of the images have been published previously, making it a very unusual retrospective. Choosing images for each section puts me through the selection process outlined above. In addition, I’m working to make the transitions from one section to the next flow as smoothly as possible. It’s a daunting task, but it’s coming together quite remarkably. As daunting as it may be, it’s been a complete joy to work on this project through this strange pandemic period. It has given me untold pleasurable hours and days when we all needed that.

I’m illustrating this article with images rediscovered in the past two years, but ones that will not be included in the book. After all, if I put images in this magazine article that are to be published in the book, they would have been published previously! I have to admit that made me gnash my teeth, wondering if I had chosen the right ones for publication while rejecting this one or that one. It’s never a clear-cut choice but at some point, a decision has to be made.

The article courtesy of ELEMENTS Magazine. The ELEMENTS is the monthly magazine dedicated to elegant landscape photography, insightful editorials and fluid, clean design. Inside you will find an exclusive and in-depth articles and imagery by the best landscape photographers in the world such as Charles Cramer, Christopher Burkett, Hans Strand, Rachael Talibart, Christian Fletcher, Charlie Waite, and Antony Spencer, to name a few. Use the PETAPIXEL10 code for a 10% discount off the annual subscription.

Header image, Monument Valley from Valley of the Gods: These two stunning locations are more than 15 miles apart, but near sunset, with the use of a long lens, they appear to be adjacent. A stormy day had broken up, clouds were disappearing, and the sun-edged layers between the two geological forms activated the land between the two.