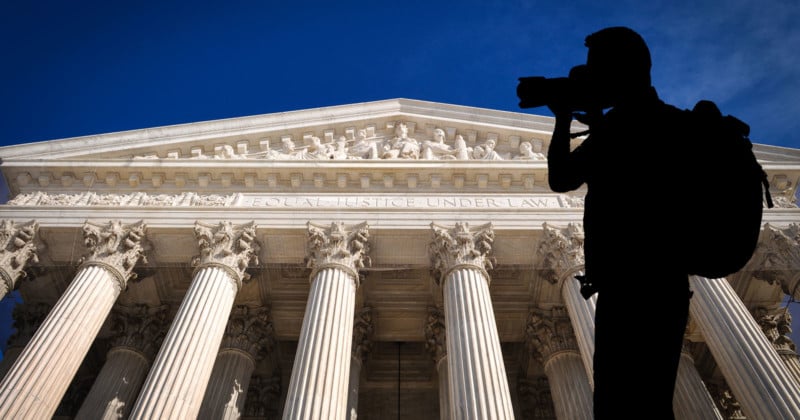 Photographers and other creatives scored a big legal win today after the Supreme Court ruled that unintentional mistakes made during copyright registration cannot be used to invalidate copyright.


The U.S. Supreme Court’s ruling was in the legal battle between the Los Angeles-based fabric designer Unicolors and the fast-fashion retailer H&M.

A David vs Goliath Copyright Battle

The copyright infringement dispute began back in 2016 after Unicolors sued the Swedish fashion giant H&M, accusing it of copying a copyrighted fabric design on a jacket, Reuters reports. A jury sided with Unicolors, which was subsequently awarded over $750,000 in damages and legal fees.

H&M appealed the decision, arguing that Unicolors had obtained its copyright through fraud.

In its copyright registration, Unicolors had filed a single application seeking to register 31 separate works, which goes against a regulation by the US Copyright Office that states that a single copyright application can only cover multiple works if they were “included in the same unit of publication.”

H&M argued that the 31 works were not part of a “single unit of publication” because some of the 31 designs were originally only available exclusively to certain customers while the rest were immediately available to the general public.

The 9th U.S. Circuit Court of Appeals agreed with H&M in 2020, overturning the $750,000 judgment and concluding that Unicolors’ copyright may have been invalidated due to mistakes that were found in its original copyright filing.

Unicolors’ then appealed, and the case was finally brought before the Supreme Court. It was a case that was closely watched by prominent groups across creative industries, including the American Society of Media Photographers (ASMP). ASMP wrote an amicus brief that was joined by 13 other organizations, including American Photographic Artists (APA), National Press Photographers Association (NPPA), and Professional Photographers of America (PPA).

‘A Big Win for Artists’

In its decision today settling the case, the Supreme Court sided with Unicolors, reversing the appeals court decision and sending the case back down for further proceedings.

“An applicant for a copyright registration—especially one who is not a lawyer—might check the wrong box on the registration documents as a result of a legal, as well as a factual, error,” Justice Stephen Breyer writes in the 6-3 decision. “Given this history, it would make no sense if [Section 411(b) of the Copyright Act] left copyright registrations exposed to invalidation based on applicants’ good-faith misunderstandings of the details of copyright law.”

Justices John Roberts, Sonia Sotomayor, Elena Kagan, Brett Kavanaugh, and Amy Coney Barrett joined Breyer in forming the majority opinion while Justices Clarence Thomas, Samuel Alito, and Neil Gorsuch dissented, stating that they would have dismissed the case instead due to Unicolors arguing something different than what was presented in its petition.

This ruling means that a photographer suing for copyright infringement cannot see a photo’s copyright invalidated due to mistakes in the application filed with the US Copyright Office if those mistakes were the result of a good-faith misreading of the law.

“This is a big win for artists and poets, who can now enforce their copyrights without fear that blatant infringers will skate on a technicality,” Unicolors’ attorney Joshua Rosenkranz of Orrick Herrington & Sutcliffe tells Reuters.

“What this means in practice is that good-faith errors, when there is no attempt to defraud the Copyright Office, should be eligible to utilize the ‘safe harbor’ provisions of the law in §411(b),” ASMP writes. “This should come as some comfort to those who do not register their works due to the fear that making a mistake will render their registrations irrelevant in the future.

“[T]his is a big win for all ASMP members and creators.”

Image credits: Header illustration based on photos licensed from Depositphotos