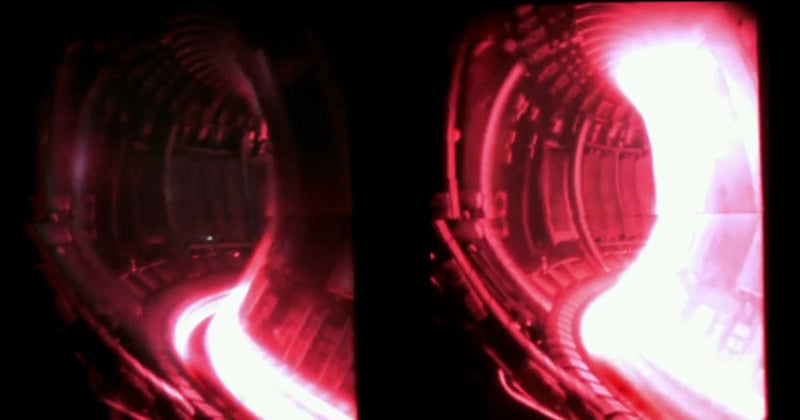 Researchers have managed to double the power generated from a fusion reaction, a record that has been in place for the last 25 years. A camera mounted inside the chamber shows the major breakthrough in reproducing the power of the sun.

The record-breaking sustained fusion trial was achieved by the Joint European Torus (JET), which is operated by the Culham Center for Fusion Energy (CCFE) and is part of the United Kingdom Atomic Energy Authority.

59 Megajoules of Energy in Five Seconds

The JET laboratory smashed its previous record of the amount of energy it could extract by squeezing together two forms of hydrogen. Researchers from the EUROfusion consortium — made up of 4,800 experts, students, and staff from across Europe, co-funded by the European Commission — more than doubled previous records achieved in 1997 at the UK Atomic Energy Authority (UKAEA) site in Oxford using the same fuel mixture to be used by commercial fusion energy powerplants.

The experiment and its record-breaking result were captured on camera:

59 megajoules of energy (and during the experiment the fusion power averaged the energy per second of about 11 megawatts) is equivalent to about 30 pounds to TNT or, as the BBC puts it, enough energy to boil 60 kettles of tea. It’s not a tremendous amount of energy, but the experiment validates design choices that have been made for a larger fusion reactor currently under construction in France.

The previous record from a fusion experiment was also achieved by JET and was 22 megajoules of heat energy. While this experiment doubled that record, the peak power of 16 megawatts that was achieved briefly in 1997 was not surpassed, as CCFE says that the focus this time was on sustained fusion power.

“These landmark results have taken us a huge step closer to conquering one of the biggest scientific and engineering challenges of them all. It is reward for over 20 years of research and experiments with our partners from across Europe,” Ian Chapman, the CEO of the UK Atomic Energy Authority says.

The Importance of Fusion Energy

The CCFE and United Kingdom Atomic Energy Authority say that harnessing fusion energy — the process of bringing together atoms of light elements like hydrogen at high temperatures to form helium and therefore release energy as heat — is of utmost importance.

“It’s clear we must make significant changes to address the effects of climate change, and fusion offers so much potential. We’re building the knowledge and developing the new technology required to deliver a low carbon, sustainable source of baseload energy that helps protect the planet for future generations. Our world needs fusion energy,” Chapman says.

Fusion is the same process that powers the Sun and promises near-limitless clean energy using small amounts of fuel that can be sourced from around the world from inexpensive materials. The CCFE says that fusion is inherently safe since it cannot start a run-away process.

“Our Industrial Strategy for Fusion is intended to ensure the UK continues to lead the world on the commercial roll-out of this transformational technology, with the potential to deliver clean energy for generations to come,” George Freeman MP, Minister for Science, Research, and Innovation, says.