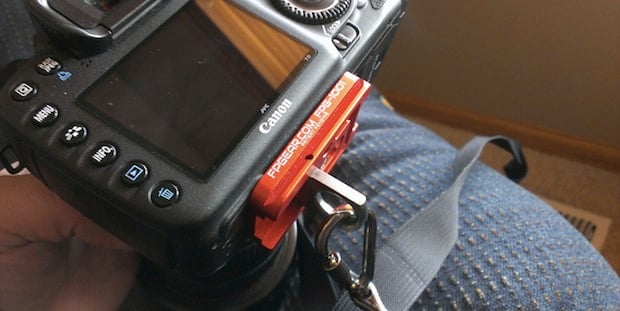 About a year and a half ago, photographer David Fliger of Fusion Photo Gear found himself in a field, rushing to mount his camera onto a tripod in order to get a shot of a tractor in the fading light. There was only one problem: he already had his sling-style shoulder strap attached via the accessory loop that was sitting where his quick release plate would normally be.

It was a problem he ran into all too often (both used the 1/4″ accessory hole on the bottom of his camera) and one he made up his mind that day that he would solve. That’s when the Fusion Plate was born.

The Fusion Plate is a quick-release plate that features a built-in accessory loop for attaching things like a shoulder strap. When you’re not using the accessory loop, it quickly snaps down flat, allowing you to attach the release plate to a tripod without any messing about with screws.

Fliger created the prototypes in his father’s hobby machine shop, but now that they have something that works, they want to scale up production to a point where they can sell the Fusion Plate at a reasonable price. So, like many inventors before them, they’ve taken to Kickstarter to fund the project.

Here’s the Kickstarter campaign video for the Fusion Plate:

Each Fusion Plate is made from aircraft grade aluminum, color anodized and laser engraved. With 21 days left, the campaign has already reached and surpassed even the stretch goal of $10,000, but if you want to be one of the first to get a Fusion Plate you’ll still want to take advantage and order as soon as possible.

The black Fusion Plate will run you $65, with the Blue and Red costing $68. For now, everyone that orders one will receive it around September, and since Fliger and his father have reached their stretch goal, three lucky pledgers will also receive a free Fusion Plate in addition to the one they’ve already ordered.

Head over to the Fusion Plate Kickstarter to order and/or check out Fusion Photo Gear’s website for more info.

How to Literally Jump Into the Hadouken Photography Fad