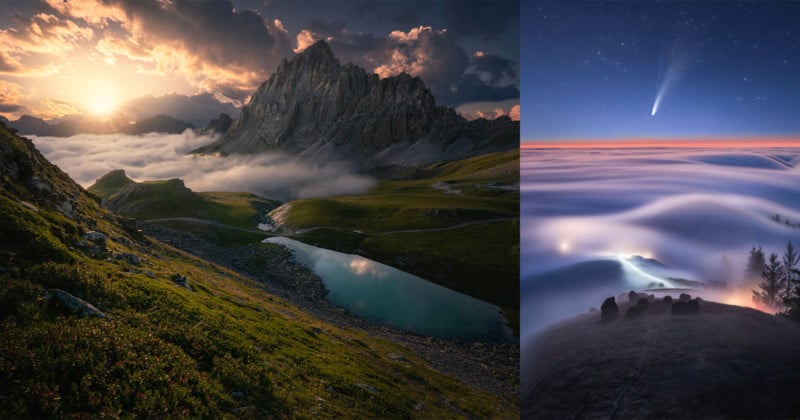 The eighth annual International Landscape Photographer of the Year has announced the winners of its 2021 competition, which awards both an individual photo as well as names an overall winning photographer.

The International Landscape Photographer of the Year

The winner of the Photographer of the Year was presented to Turkish photographer Aytek Cetin for his series below, shot in Cappadocia:

“The 60-million-year-old story of fairy chimneys and the fact they have been home to different civilizations for tens of thousands of years, makes Cappadocia extremely mysterious for me,” Cetin says. “If you are lucky, you can visit there during hazy, atmospheric conditions with a soft light pushing through at sunrise or sunset.”

Cetin was born and raised in Ankara, the capital of Turkey. He graduated from college with a degree in sales management and worked as a store manager for a store that purveys luxury Italian clothing brands.

“I used to go to the sea for my limited holidays, but after repeating the same kind of trips for years, it was starting to lose its meaning for me. Then I decided to do something different, to dive deeply into nature,” he says.

“I started to explore remote, mountainous regions and experiencing the energy of the mightiest entities of nature, left me deeply impressed and awakened a love for nature within. An interest in photography followed as a result and has now turned into a passion!”

Second and third place were awarded to Max Rive from the Netherlands and Andrea Zappia from Italy. Their series are below:

International Landscape Photograph of the Year

Tanmay Sapkal from the United States was awarded Landscape Photograph of the Year, which is a category that awards a single photograph. Sapkal describes himself as an amateur landscape photographer who currently works as a hardware design engineer for Apple.

The winning photo, below, was captured from Mount Tamalpais, located across the bay from San Francisco in the Marin Headlands.

“It is quite a special place for photographers as it stands above the local landscape which is engulfed in low coastal fog almost every summer evening. After shooting there tens of times over the last four years, I realized that I really liked the way fog looks when it is lit from underneath,” he says. “I also realized that the comet would become visible in the northwest sky, so I started planning this shot.”

Sapkal says that it wasn’t possible to line up the comet exactly above the foreground like he wanted, so his image is made of two exposures.

“It took a couple of visits to get just the right amount of fog on the hills to create the dreamy setting and then I waited patiently for some cars to drive by and create a blanket of light under the fog.”

Second and third place were awarded to Cédric Tamani from Switzerland and Ben Goode from Australia:

The competition also features a set of ever-changing categories, with this year’s competition awarding prizes for the following five special categories: The Monochrome Award, Amazing Aerial Award, Snow and Ice Award, Night Sky Award, and The Hand of Man Award.

To see all the winners and the top 101 images, make sure to visit the competition’s website as well as consider the International Landscape Photographer of the Year eBook.

Image credits: All photos individually credited and provided courtesy of the International Landscape Photographer of the Year competition.