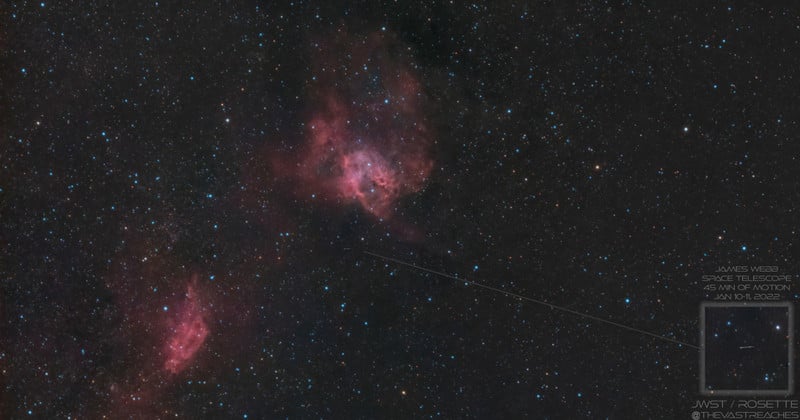 Astrophotographer Jason Guenzel captured a photo of the James Webb Space Telescope as it flew through space toward its final distant parking orbit. The image was captured while the telescope was 1 million kilometers (620,000 miles) away.


Guenzel’s professional background is in aerospace engineering, and he became passionate about astrophotography about a decade ago.

“I’ve had a lifelong interest in humanity’s exploration into the universe around us and, along those lines, my professional background is in aerospace engineering,” the photographer tells PetaPixel. “In recent years, the technology to enable astrophotography has become much more accessible to the amateur. About 10 years ago, I began very modestly and slowly refined my gear and techniques to improve the results.”

From an Idea to a Photo of the Telescope

Guenzel says he had been following news of the telescope after it launched on December 25, 2021, and the idea of trying to catch it on camera popped into his head.

“I started with the passing thought that I’d like to see if I could get a picture of it,” Guenzel says. “As an astrophotographer, I’m all too familiar with catching satellite trails in my photos. This one was a unique challenge, though.”

Because of how faint the telescope would be at its distance from Earth, Guenzel was not even sure if the photo would be possible with his equipment.

“I looked up the position in my planetarium app, SkySafari,” he says. “Seeing that it would pass near the large Rosette Nebula, I planned it out and went for it with a widefield telescope to capture the whole scene.

“This photo was taken when JWST was one million km from us, 2.5x further than the Moon, though it was still en route to its parking orbit at the Earth/Sun L2 point, which is another 600,000 km out!”

Guenzel resulting photo shows the Rosette Nebula with a light trail that shows 45 minutes of the telescope’s trip through space.

How the Photo Was Created

“To assemble the photo, I shot a sequence of twenty 2-minute pictures to frame the scene,” Guenzel says. “I used a monochrome camera and a clear luminance filter here to maximize my signal in each subframe. Flipping through them I could see the little dot of JWST moving against the background.

“I stacked those frames together in a ‘maximum’ (Lighten, for Photoshop users) mode which rendered JWST as a streak over the 45 minutes it took to shoot the frames. This is similar to techniques used to make star trail images, only I was tracking the sky and letting the JWST move through the frame.”

This stacked photo was black and white, so turning it into a color photo was the next step.

“Once I had this foundational image, I then later collected RGB frames for the color and then used a narrowband filter for detail and contrast in the nebula regions,” the photographer continues. “I then overlaid and combined everything.”

The final photo only shows 45 minutes of the telescope’s trip, but the total time Guenzel spent photographing the sky to create it was far longer.

“In total, I exposed this area of sky for over four hours to bring the full scene into vivid detail,” he says.

Guenzel says that people have been surprised to learn that his photo was captured with relatively modest equipment.

“There is a lot of surprise that this was even possible with such a small telescope,” he says. “The one I used has just 40mm of aperture and 180mm of focal length, basically the size of a camera lens.”

The Telescope Has Arrived at Its New Home

After a journey through space that lasted about a month, the James Webb Space Telescope fired its thrusters for about 5 minutes on January 24th, 2022, and settled into its new home in space, the L2 Lagrange point.

The L2 point is roughly 1,500,000 km (930,000 mi) beyond Earth’s orbit around the Sun — about four times farther than the Moon’s orbit — it allows the telescope to stay in the same position relative to the Earth and Sun as the Earth orbits the Sun.

The Hubble telescope, by comparison, orbits just 550 km (340 mi) above the surface of the Earth.

Now in its final destination and having successfully unfolded into its operational configuration, the telescope will spend several weeks cooling down to its operating temperature of less than 50 K (−223 °C; −370 °F), which is necessary for capturing faint observations in the infrared spectrum.

“Seeing one of mankind’s biggest technological triumphs floating out there, hopelessly dwarfed by the cosmos is a humbling experience,” Guenzel says. “There is excitement to see what discoveries this telescope will bring and I think this image highlights just how much there is to explore out there.”