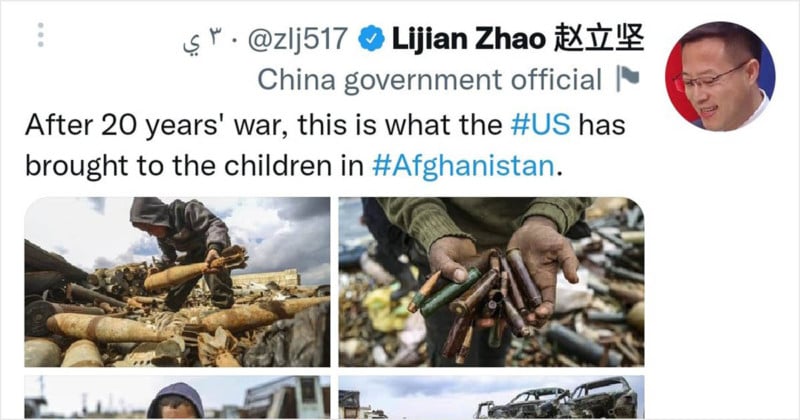 At least two Chinese government officials have been caught using photos of the Russia-backed Syrian regime’s effect on children to critically denounce the United States and its two decades in Afghanistan.

Two Chinese government officials, Lijian Zhao and Hua Chunying, were caught identically tweeting four photos of Syrian children with the caption, “After 20 years’ war, this is what the US has brought to the children in Afghanistan.”

The duo tweeted a photo series called “Shells of War” by Syrian photojournalist Ali Haj Suleiman, who tweeted the photos in December of 2021 as he was awarded a “place of honor” in last year’s UNICEF Photo Contest.

The photos depict large and small shells that are used by the Assad regime in the country, which is backed by Russia.

“These large and small shells are the Syrian Assad regime supported by Russia… the legacy of attacks against Syrian civilians and children,” Suleiman tells Radio Free Asia. “I’m so angry because what the officials are doing is changing the truth.”

The two Chinese officials appeared to want to leverage the imagery of children and tools of war to attack the United States and its time in Afghanistan, but the two quickly deleted the tweets after they were called out by the photographer. The tweets appeared to stay up for at least a few days, however, and Radio Free Asia says they were also heavily circulated through Weibo in China.

“He did not contact me and did not apologize after deleting the tweet,” Suleiman continues, referring specifically to Zhao. Suleiman has pinned a Tweet on his profile with a screenshot of the since-deleted misinformation.

Ironically, China’s effect on the region is at least partially responsible for the photos the two officials falsely used to try and implicate the United States, according to Suleiman.

“The Chinese government is participating in the ongoing massacre against the Syrian people through its use of its veto in the Security Council against decisions aimed at deterring the Syrian regime from killing the people and even against decisions to pass humanitarian aid to Syrians across the border,” he tells Radio Free Asia.