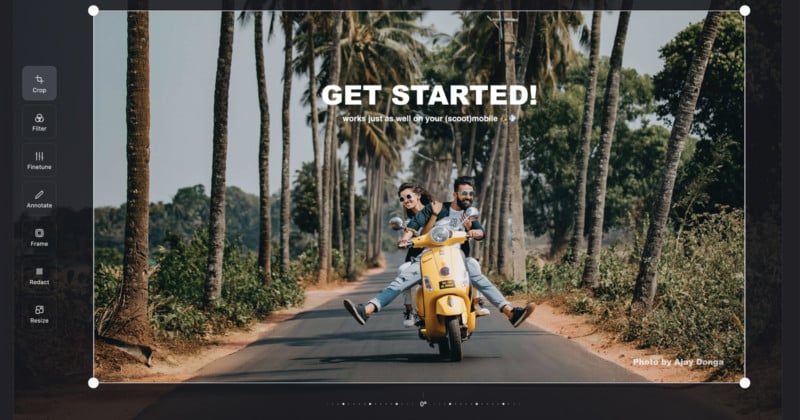 Edit.Photo is a new, free, browser-based photo editor that advertises itself as offering fast, effective editing capabilities with no popups, ads, or tracking and doesn’t require any account creation to use.

One of Several Web-Based Photo Platforms By One Company

Edit.Photo has been launched by PQINA, a company that designs and builds “performant, responsive, and highly polished web components.” The company’s website is relatively bare-bones, but shows that Edit.Photo isn’t its first product for image editing in a browser. PQUINA also runs the Pintura Image Editor, Crop.Guide, and Redact.Photo along with FilePond, Flip, and SVG Color Matrix Mixer. A few of the applications appear to share functionality.

Edit.Photo was built on a Javascript Image Editor SDK known as pintura and is also the basis of the aforementioned Pintura Image Editor. Pintura Image Editor is sold to a wide range of companies who need any sort of image editor built in to their application such as DropBox, Square, and Accenture (all three are Pintura customers).

The Edit.Photo iteration is a browser-based iteration that works on both desktop and mobile devices. The editor can load pasted URLs, dropped images, and pasted images. The tools available are simple, but still robust enough to support basic image editing and feel a lot like what can be found in many smartphone apps with about the same number of options and capabilities.

It supports cropping and the addition of filters, notations, frames, and resizing. The “Finetune” tool provides a baseline level of editing tools including ways to adjust brightness, contrast, saturation, exposure, temperature, gamma, clarity, and vingette.

While not much of what is offered in Edit.Photo is unique, its promise of no ads, tracking, or a requirement for an account may appeal to users who just want a reliable way to make quick edits when away from their main computer. It also provides a solid option for beginners to try their hand at photo editing without having to make any commitments or financial investments in software.

Edit.Photo is free to use on either mobile or web, and expect to find updates on any additional features or changes posted on Twitter through either PQUINA or its founder Rik Schenninck.