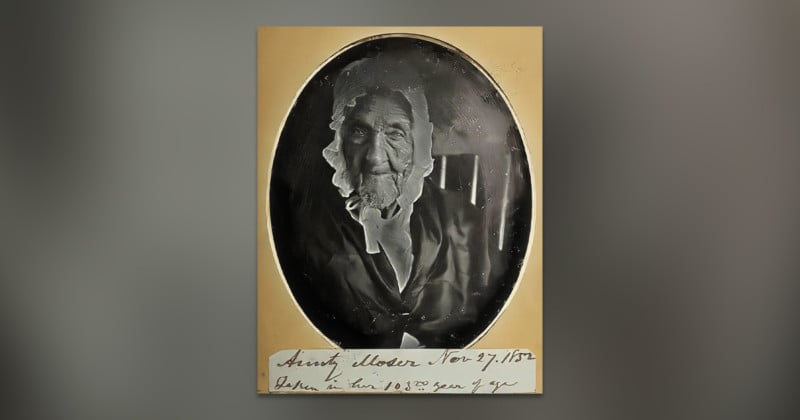 This photo is of a woman known as “Aunty Moser,” who was possibly 102 years old when she sat for a daguerreotype portrait in 1852, making her one of the earliest-born people to be photographed.

Aunty Moser’s portrait was made with the daguerreotype process, which is one of the first publicly available photographic methods and was widely used in the 1840s and 1850s for portrait sittings.

Say hello to Aunty Moser, the whiskered centenarian who was born 271 years ago – all the way back in 1749 – & photographed here at the age of 103. She is one of the earliest-born people ever to have been photographed, sharing that distinction with Conrad Heyer, also born in 1749. pic.twitter.com/TnNKHygPNF

The resulting image plate is currently being offered for sale by Cowan’s Auctions and has been labeled as was taken on November 27, 1852, when Aunty Moser was in her “103rd year of age.” The portrait is a sixth plate daguerreotype that was sized 2.75 by 3.25 inches and was popular because people could easily carry the images around by putting them in a pocket or a purse.

The name “sixth plate” refers to “the size of the complete image plate, including portions which may be covered by its mount, and not just the visible portion,” according to Christopher Wahren Fine Photographs. This particular size was popular because people could easily carry the images around by putting them in a pocket or a purse. Plate sizes, such as whole plate, half plate, quarter plate, and smaller ones, are still used as the standard method for referring to the dimensions of 19th-century images.

Ben Beck, who has collated information of various materials and evidence of historical data related to human history, has noted that if the description of the portrait is correct, that means Aunty Moser was actually 102 years old and that she would be 103 on her next birthday. Beck speculates that she was likely born in 1750, not 1749 as the auction house states. That would make her the earliest born woman to ever be photographed.

Unfortunately, there is no additional evidence to corroborate the portrait’s label, meaning there is currently no other information to identify the woman portrayed or her age. This means that Aaffie Polhamus, who was confirmed to have been born in 1750, remains the earliest-born woman to be photographed, although Aunty Moser’s portrait is a significant historical find even without verification of her age.

When it comes to the earliest-born person to be photographed, historians are presented with a handful of potential subjects. One is John Adams, from Massachusetts, whose birth record shows he was born on January 21, 1744. A photographic record of his portrait, also a daguerreotype, is in the possession of Susquehanna County Historical Society, according to Beck, although the original source is unknown.

Beck also presents Baltus Stone, an American revolutionary war veteran. A quarter-plate daguerreotype of his portrait was sold on October 6, 2010, at Sotheby’s auction house in New York. The plate had a manuscript inscription that states he was born in October 1744, although some evidence has conflicting information on his exact birth date. For example, on Find a Grave his birth date is attributed as June 7, 1747.

Lastly, another sixth plate daguerreotype depicts Caeser, an enslaved man who was supposedly born in 1737. If true, this would make him the earliest-born person photographed. The New York Historical Society (NYHS) holds the plate, which was taken in 1851 when Ceaser was presumably 114 years old. However, NYHS has noted that his birth date cannot be confirmed with the evidence available. Nevertheless, Ceaser is likely the earliest-born enslaved person ever photographed.