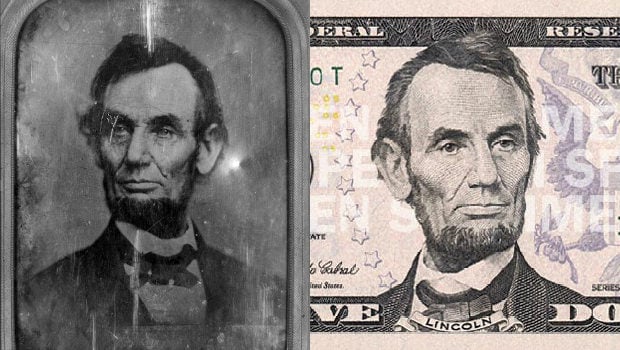 If you pay close attention to presidents, or money (or preferably both in this case) you may have noticed that one particular famous photo of President Abraham Lincoln taken in 1864 was the inspiration for the photo we now see on the five dollar bill. But you may have also noticed that the President’s mole is on the wrong side of his face on the money. Well actually it isn’t, the “mirror image” on the five dollar bill shows the President as he was in real life. The original photo, taken using an old technique called daguerreotype, is a mirror image.

Not unlike the tintype photography we posted on earlier in the week, daguerreotype yields a one-off positive on a photosensitive plate. The downside of this type of photography and the lack of a negative is that the final image is at the mercy of the lens optics, leading to the mirror image you see above. So remember, the mole was on the right side of Lincoln’s face… just in case a fifth grader gets indignant telling you otherwise.