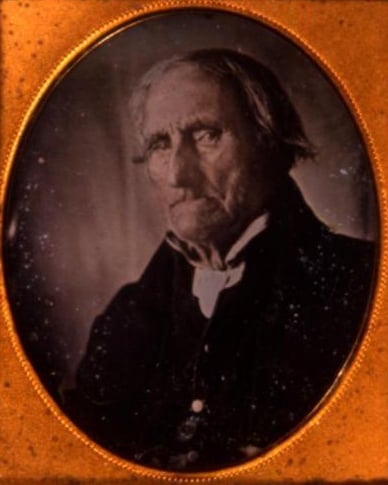 At the ripe old age of 103, New Englander Conrad Heyer, a veteran of the American Revolution, sat down to have his portrait taken. Maybe he knew this at the time, or maybe he didn’t, but the gruff, stern man staring defiantly out of the portrait above is believed to be the earliest born human ever photographed.

According to Imaging Resource, the daguerreotype is thought to have been taken in 1852. And while it misses the mark of being the first portrait ever taken by a good margin, Heyer’s estimated age at the time would make him the man with the earliest birthday ever to be photographed.

But that birthday is just a number, and whether or not he is the earliest born person ever photographed only adds a bit of intrigue to what is already an incredible photograph. You’re looking into the eyes of a man who served under George Washington. A man who crossed the Delaware River to Valley Forge.

Heyer died 5 years after this photo was taken, capping off an extraordinary, or at the very least historically fascinating, life at the ripe old age of 107 on his farm in Waldoboro, Maine. To find out more about this man, his story, and his photograph, head over to New Market Press, Maine Memory or Find a Grave.

Google+ Stories Can Automatically Create Impressive Albums from Your Uploads