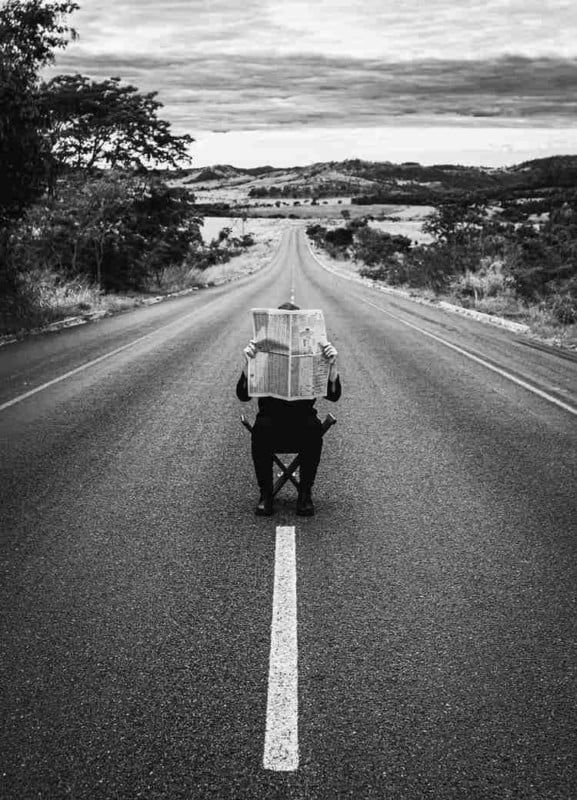 I grew up in a world where photographs were produced and consumed in printed format. Digital technology was already brewing in the background back then, but it was still an analog world for the average person.

Newspapers, magazines, and broadcast television were among the primary means of consuming news, entertainment and advertisement. Instead of opening Google or Instagram on your smartphone, you’d walk to your local newsstand.

1. Prints and the Power of Photography

The way we were exposed to pictures was different, but the photograph served underlying social functions which were similar in essence to what we have today – it didn’t just convey the news, but it also helped sway the public opinion through careful editorial curation of which photos to publish or not, as well as deliberate decisions on the photographer’s part on how to compose his images and what to include in the frame. It also served as a vehicle to advertise products and services, to spark our desire and open our wallets.

Photographs have the power to form opinions, express ideologies, and promote lifestyles. That much didn’t change. That’s why we have initiatives like Reading the Pictures, which started in 2001 and according to their own words are “dedicated to visual culture, visual literacy and media literacy through the analysis of news, documentary and social media images”. As pictures become more prevalent and numerous each year, they hope to educate the population on how to carefully “read” the nuance of their narrative and meaning.

Needless to say, back in the analog era, that power to form opinions was far more centralized and concentrated in the hands of the few media corporations that got to pick and choose what to show us. You also needed a lot more money if you wanted to advertise your products or your company in magazines or on television. That wasn’t a market open to small businesses.

It wasn’t very easy to have access to everything photography had to offer either. You were limited by the curation of magazines, galleries, and photo contests — usually the subjective taste of a few critics and editors deciding what the world could see of the photography medium. But all of that was about to change.

2. The Digital Age and Social Media

The advent of the digital revolution shook photography to its foundation. But it was more specifically the rise of social media that completely changed this centralized dynamic. Even though many of the big media corporations still remained on top, the tail end was extended dramatically. We saw an explosion of digital influencers, content creators, independent news channels, and small digital businesses make an appearance.

Suddenly, photographers who were previously unknown gained huge followings and visibility on social media like Instagram. Tips and techniques were shared faster and more easily as well, which helped to accelerate and facilitate learning for everyone. In a way, you could say access to photography became more democratic as a whole.

But of course, we had and still have the big elephant in the room – the social media algorithms, which dictate what shows up on your feed. Instead of only editors, we now have the almighty algorithm deciding what you see. It’s more decentralized and tailored to our own individual tastes of course, but still follows one main overruling criterion: it will prioritize whatever maximizes your engagement and time spent with the platform. And that comes with the dubious baggage of click baits, hate clicks, fake news, and doctored photos that have become a central topic of discussion in recent years.

On this issue of fake news and doctored pictures, we have the example of Jonas Bendiksen and his brilliant work on The Book of Veles. While doing a photo story on the fake news industry in Macedonia, he fooled the entirety of the photography community with computer-generated fake pictures of fake people as a clever exposé on the topic, before finally revealing the truth about his project.

Bendiksen’s work is fertile terrain for the discussions surrounding digital photo manipulation and how to identify what is real and what isn’t. There are scientific studies showing that fake pictures can lead to very real changes in human memory. People will remember fake photographs as real events, even when warned about the possibility that what they are seeing is fake.

Even though photo montages have existed since the days of the darkroom, the digital environment made photo editing and photo manipulation extremely easy and accessible to all. Even outside of the photojournalism niche, Instagram “bangers” often depict almost surreal landscapes with sky replacements, extreme color manipulations, and portraits of people with impossibly perfect curves and skin.

The discussion here is not whether that is even a problem or just a natural evolution, but rather that this boundary between photography and manipulated photo illustration is getting each time more blurry and tricky to navigate as technology evolves. And this leads us to the current advances in computational photography.

3. The Smartphone and Computational Photography

It would be very remiss of me to neglect to talk about the monumental influence that smartphone cameras have had on photography as a medium in society. Rise Above Research estimated that around 1.13 trillion pictures were taken in 2020, and that’s accounting for a 15% decline caused by the pandemic. Between 2010 and 2019, seven times more pictures were taken than in the preceding decade.

That number is not only staggering but also a direct result of the widespread use of smartphones in society. The estimation is that 6.37 billion people have smartphones in the world today, that’s almost 81% of the global population! This number is even higher for older model mobile phones, at 7.10 billion users, which is roughly 90% of the population. And many mobile phones have cameras in them, just like smartphones.

The Kodak Brownie of 1900 is widely mentioned in the history of photography for being the first attempt to bring photo cameras to the daily life of the average person. It had more affordable prices, simple controls, and a portable format. But even though it was considered a commercial success, only 150 thousand Brownies were sold in the first year of production.

It was truly the smartphone that quietly put photography in the hands of nearly 90% of the global population and turned picture-taking into a casual and integral part of their daily lives. And as if that wasn’t enough, smartphone cameras are also starting to take the lead in several areas of research and development, especially computational photography.

At first, smartphone cameras struggled to compete with dedicated camera setups due to the limitations in the size of their sensors and lenses. But over the years these limitations have been overcome, in large part due to computational photography and AI technology. Their shutterless sensors are so blazingly fast that by pressing the release button, several pictures are taken at once, while the computational technology does its part by combining them as needed to create stunning images with high resolution, low noise, and high dynamic range, the likes of which can only be achieved by RAW file post-processing in traditional full-frame cameras.

And that’s just one example of how advanced smartphone cameras are these days. High-end full-frame mirrorless cameras seem to be headed in the direction of computational photography as well, with the most recent Nikon Z9 making waves as the first truly shutterless camera with incredible sensor speed.

4. NFTs and the Future of Photography

Most photographs are now consumed digitally, usually on tiny smartphone screens. This has obviously impacted our workflow as photographers, but even beyond that, it has also affected the aesthetic side of image-making. From the favored vertical crop that fits better on a smartphone screen and makes better use of social media feeds, to the more graphic and contrasty look that tends to pop and get more clicks in these formats.

And now NFTs (or non-fungible tokens) seem to be the next evolution in digital image consumption and art collection. This article won’t go into details on what NFTs are – if you don’t know yet, you can check it out here. But basically, NFTs are allowing photographs to be sold and collected by art dealers in digital format as if they were actual limited edition fine art prints.

The blockchain technology underlying NFTs allows the use of a coded smart contract every time an NFT is sold online. This contract ensures that a particular NFT is a limited edition with ‘X’ number of copies, after which it can’t be sold anymore, only existing copies can be resold. Not only that, but the photographer can also specify a royalty fee percentage, so every time a copy is resold, he will automatically receive a part of the profit.

Many photographers are already starting to make a living out of NFTs. And this is just scratching the surface of what NFTs and smart contracts can do. Several content creators and digital influencers are already using smart contracts in more creative ways to build their communities. Just as an example, you could create a project where each NFT sold will buy the owner of that NFT a VIP membership in your community, access to photo courses or lessons, or even one-on-one video conferences or real-life meetings with you.

The future is here. The way we produce and consume photographs has gradually shifted from analog to digital and now we’re headed towards computational photography and blockchain technologies. But what hasn’t changed in these last few decades is the function of photography.

We still take pictures for sentimental value and to remember important events, to share our lives with friends and the world, to inform and promote values, to market products, services, and lifestyles, to inspire and express our emotions and ideas. And all of that is still best achieved through the careful and deliberate use of composition and lighting, regardless of whether you’re carrying a smartphone, the latest model mirrorless full-frame camera, or a nostalgic 35mm film SLR.

About the author: Raphael Vieira is a conceptual photographer based in Brazil. The opinions expressed in this article are solely those of the author. Raphael started in photography at the New York Institute of Photography in 2008, and has been working professionally ever since. Before that, however, Raphael dedicated himself to the study of Psychology, obtaining a Master of Arts in Behavior Analysis from Columbia University. At the intersection of these different paths, his photographic work often places fictional characters in situations of conflict and tension, portraying the human psyche in photos that are captured directly on camera, without post-processing montages or manipulations. You can find more of Vieira’s work on his website. This article was also published here.

Creator of the e-book O Olhar do Fotógrafo (2020) , Raphael seeks to democratize and demystify the hidden knowledge about how to photograph well; he is a photographer, an educator and a psychologist.