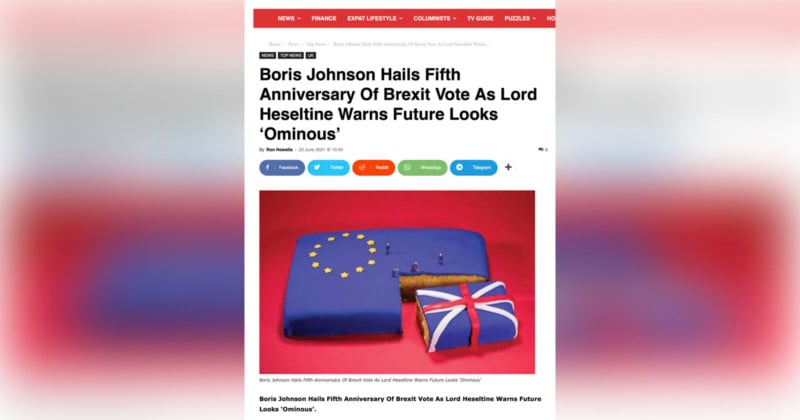 EuroWeekly News – based in Malaga, Spain and published by Michel and Steven Euesden – represents itself as the leading English language newspaper in Spain, with six editions and a circulation of over a half a million copies. What they seem less obvious about promulgating is that they also apparently feel entitled to exploit the work of independent visual artists.

A few months back I was disheartened to find one of my copyrighted photographs published on their website without permission, license, or even attribution.

The image had been in use since June of this year. While one would hope that a professional publication would have a higher standard than to use any copyrighted material without permission, someone at EuroWeekly News thought it was a good idea to grab my work off the Internet and to use it to draw traffic, interest, attention to their site, unjustly enriching themselves with advertising revenue in the process.

A disclaimer at the bottom of their site warns that “no part of their website may be reproduced without the written permission from the publisher” and “All rights reserved.” So they seem to care about the rights insofar as it relates to content they create, whilst they trample the rights of other creators.

The image in question was created for an assignment from Politico magazine in 2016, on the eve of the Brexit vote. While editorial assignments generally have notoriously short timeframes this was one of the tightest deadlines I ever had to deal with as it was a less-than-24-hour turnaround.

There was little time for research or sketching. For that assignment, I literally had to drop the work I was doing and start executing the idea immediately. One of the first ideas that came to mind was of a cake in the form of the EU flag. A section of the cake – with a simplified design of the Union Jack – would be cut away by tiny men with saws.

Since we obviously didn’t know the outcome of the vote before the count was in, the assignment would have to be shot with both ‘out’ and ‘in’ options. For the unused ‘in’ option, workers were pushing the piece of cake back into position.

I recall making a special trip across town that day to pick up fondant, before returning to my studio kitchen to bake a cake from scratch. Then the covering was designed. There were a couple of other ideas I ended up shooting, in order to give creative director Tim Ball some choices. One of the other images Politico ended up running was a representation of the UK and the coast of mainland Europe in cereal, with a small boat sailing home. The images were published on Politico (with my byline), were registered with the US copyright office, and became part of my catalog and archive.

My investment in this assignment was a very busy day of work in acquiring the materials, preparing and styling the props to be shot, lighting the set, shooting, editing, and retouching, and making any final tweaks requested by the publication. On top of this expenditure of time and creativity, add to that the heaps of expensive equipment required to be a professional photographer, the taxes and overhead of running a business, and the significant investment of decades of honing my craft as a photographer, achieving the ability that puts me the privileged position to be approached with assignments by publications such as Politico.

Does it seem fair or just that once my image is published on the Internet, strangers feel they can just come along and take my work without asking, without payment, and without even expending the trouble to include a credit to recognize the person who actually worked to create the image? In fact, not only is this unjust but is also unethical and unlawful, including in Spain.

I find it a sad and frustrating reality of the Internet that once an image is published online too many think it is in the “public domain” and is public property. But surely a publisher of news ought to know better. I don’t know the circumstances by which my copyrighted image was acquired by EuroWeekly News, but investing just two minutes to do a reverse image search on Google Images would have identified the image as mine. Perhaps EuroWeekly News lacks the internal standards requiring their employees to legally and carefully source content. 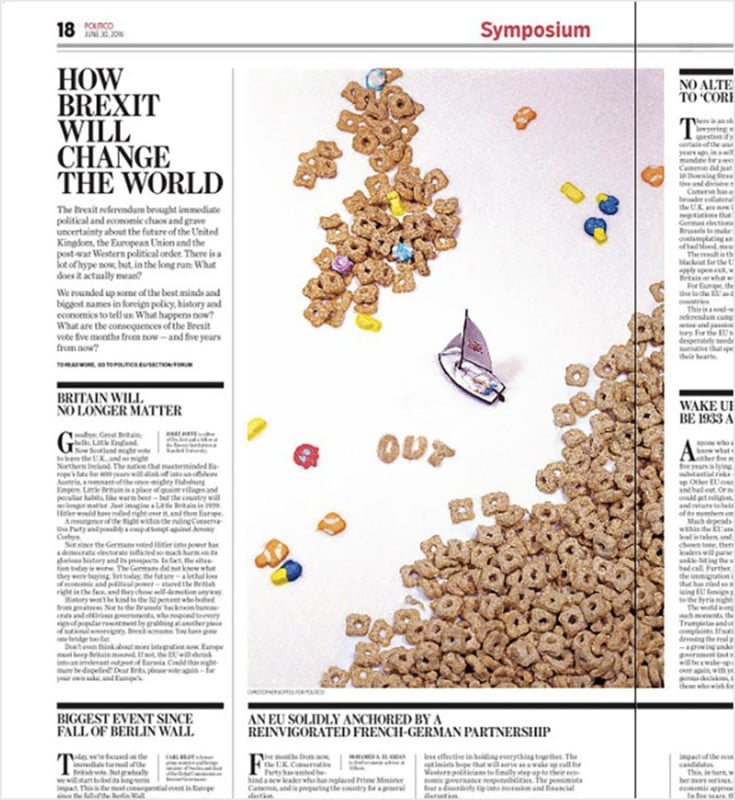 As soon as my studio discovered the infringement on the EuroWeekly News site, we tracked down the ISP for the site, identifying this photograph as my intellectual property and demanding that the infringement be removed. A follow-up letter was sent to the newspaper, attempting to explain the real harm done to independent visual artists when their work is selfishly and unlawfully published without permission or payment.

Having dealt with a mountain of willful infringement over the past decade, I guess I expected to hear one of the usual obtuse excuses as to why my image had been used on their site. But in a most cowardly and unprofessional manner, my letter was rudely ignored. I never had the courtesy of a response.

Their lack of even the ability to offer an insincere apology suggests a sense of entitlement. It makes me wonder how much of the visual content on their website, and in their publications, was legally licensed, or if they are in the regular habit of generating advertising revenue for themselves with the work of others.

It was only after EuroWeekly News was contacted by my lawyers in Spain did they take the trouble to respond to this matter. And even then, apologies and contrition were not their priority. Despite the fact that EuroWeekly News is an English language publication, they bizarrely demanded that we translate into Spanish the certificate of registration for the image from the United States copyright office. And rather than come clean and admit that they had never sought permission and were never granted a license to publish and reproduce my copyrighted work, they were basically demanding that I prove to them that I was the author of the image.

Beyond that, they seemed to feel entitled to name their own price offering to pay me a taken sum that had absolutely no bearing on what this image would have legally licensed for had permission been sought.

At this point, I should say that my work is endlessly and rampantly infringed. And that I feel strongly about pushing back on this thoughtless exploitation by frequently pursuing commercial infringers of my work. In the past decade, my legal representation – in a range of countries – has pursued lawsuits and settlements from both large and small companies, including some billion-dollar, multi-national corporations.

In the United States, creators have the large hammer of statutory damages with which to motivate infringers to come to the table and take responsibility. My lawyers have also been successful in negotiating settlements in Europe, Australia, Asia, and the Caribbean.

In almost all of these cases, the investment of time and money (in the form of legal fees) is usually a wash with the amount of money recouped. The windfall is really in what I gain in terms of my own satisfaction in being able to take a stand against people who seemed determined to take and use the value of what is not theirs.

With that said, Spain presents its own challenges. While it seems to have reasonable laws against copyright infringement, the fact that damages are limited to 200€ (~$225) — regardless of the fair market value of the stolen intellectual property — renders enforcement as essentially toothless.

I’ve been lucky to travel extensively in Spain and have found much to admire there. However, it is deeply disappointing that a country with such a rich tradition of art, literature, architecture, dance, music (not to mention wine and culinary excellence), etc. has such weak enforcement against willful infringement of creator copyrights.

As I am not content to accept EuroWeekly News’ arrogant and insulting response to this matter, my studio is beginning the process of filing a lawsuit in the Spanish courts, in an attempt to hold EuroWeekly News responsible for their unapologetic infringement of my intellectual property. While spending many thousands of euros in legal costs to obtain just a couple hundred euros in damages, seems an exercise in futility, it is my hope that this action will call attention to this fundamental weakness in Spanish copyright enforcement.

EuroWeekly News, unfortunately, is not the first business in Spain that I have discovered infringing my work. And some other infringers have been equally dismissive and arrogant about the real harm they do to my livelihood by exploiting my copyrighted work without permission. So perhaps shining some light on this ongoing problem might do something to motivate Spanish legislators to amend their copyright damages structure to something more in sync with the significant work that they already have done with adopting reasonable laws against infringement.

P.S. I will post updates to this case as it progresses through the Spanish courts.

About the author: Christopher Boffoli is a fine art, commercial and editorial photographer based in Seattle, Washington. The opinions expressed in this article are solely those of the author. Boffoli is best known for his Big Appetites work, which features tiny figures posed against real food landscapes. In addition to his commercial and advertising work for brands large and small, his fine art photographs may be found in galleries and private collections in the United States, Canada, Europe, and Asia. You can find more of Boffoli’s work on Instagram. This article was also published here.