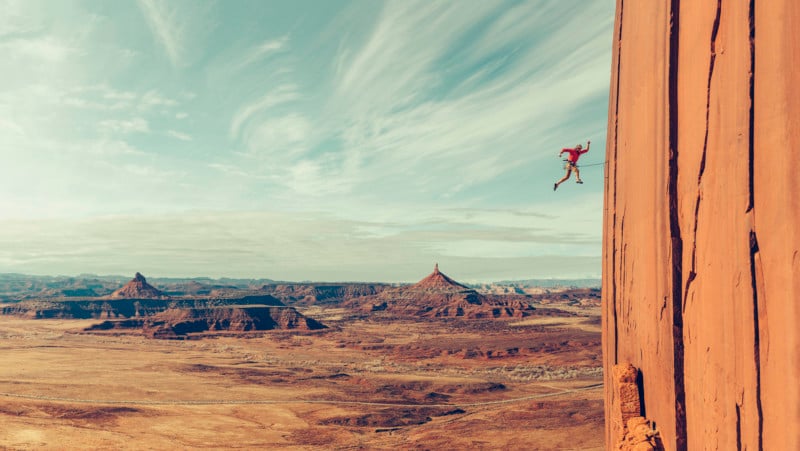 Over the years, the Red Bull Illume competition says it has solidified itself as one of the largest photo competitions in the world and has produced some of the best action and sports photographs showcasing the most creative and captivating images on the planet. Winners are selected by an international judging panel of 40 photo editors and experts, tasked with narrowing down the competition from the over forty thousand entries. Each winner takes home a unique trophy for their efforts, along with an impressive prize package from the collection of sponsors and partners of the competition that totals over $264,975.

The competition this year saw 41,447 submissions that were narrowed down to 56 finalists, 11 category winners, and the final overall winner.

The overall winning image (featured above) was captured by Will Saunders and is titled “Dirtbag Superhero,” which highlights the athleticism and fearlessness of rock climbing.

“Chase after those conceptual thoughts because that is where unexpected moments come to life,” Saunders says.

“Whenever I go out to make some images, I do my best to come back with something that I haven’t done before. I’ve shot whippers many a time, but this time I wanted to try something a little different. A group of us rallied out to my favorite place in the desert to get some climbing in and make some imagery along the way. I asked Jake to really shape his body into more of a powerful movement rather than the classic falling position. With grace and style, Jake pulled this shape out of the air, allowing me to capture an image that is unique compared to most of the literal climbing imagery we see. His body reminded me of a superhero, which is fitting to me because most of my friends in this action sports world are my heroes. The ticket here was to just push the conceptual idea enough while also grounding the image in reality.”

Below are additional winners from several of the other major categories, accompanied by captions provided by the photographers. 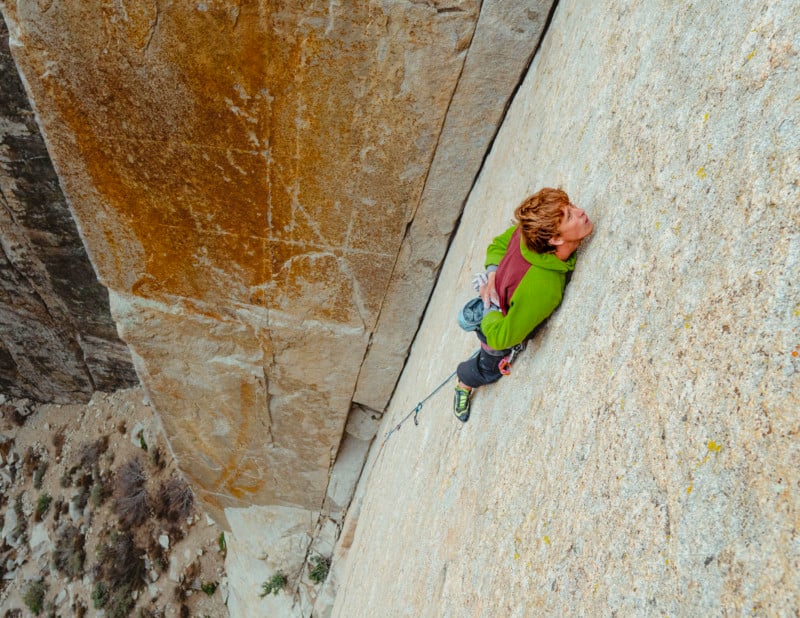 “My friends and I spent the winter of 2021 living communally in an assortment of vans and cars amidst the Buttermilk’s monstrous granite boulders in Bishop, California. Our days looked like this: wake up, drink coffee, go climb. With our bouldering season coming to a close, as the snow melted and thoughts of long Yosemite climbs loomed, Jack grew eager to test his fitness on ‘Queen of Heartbreaks’ in Pine Creek Canyon. Before tying into the sharp end Jack was clearly nervous. From the ground, the route’s 39 meters were daunting and blank. The holds remained obscured to me even as I ascended the fixed line to find the best position to shoot from. The sky darkened and the winds picked up as Jack stepped onto the climb for his onsight attempt. Questing up the blank face, Jack found a cheeky no hands rest. Doubt cleared from his face as I snapped the shot. Even as it started raining upwards, Jack cruised to the chains.” 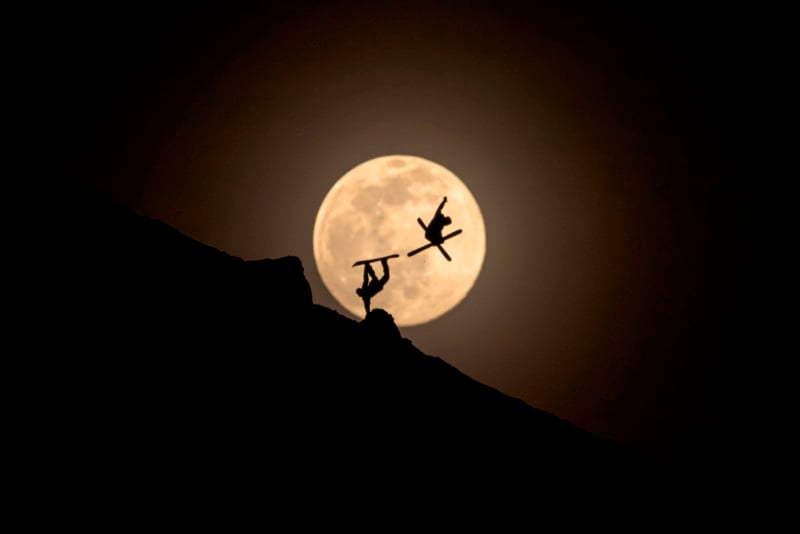 “We worked hard for a week, just planning and preparing the terrain for this shot. What’s particularly difficult to achieve in a shot like this one is to place the two kickers in the right place a couple of days before. Even more tough is that it needs to be taken at 3,000m high with the heavy gear you need to take the shot. Once you have the scenery ready, you just have to wait for the moment and pray for a bluebird sky that day, along with being confident in the riders to synchronize the jump and the handplant. That’s the real challenge. On the day, we went for an epic sunset session, testing the kickers and training for the moon shot. Then, when the moon was rising I went to my place 300m away, communicating via walkie-talkies. What’s really amazing is that we took the shot on the second try – the photo is the result of great teamwork.”

“A crazy location in Hintertux, deep in the mountain and below the surface. The ‘nature ice palace’ is a fairy tale world inside a glacier and also contains an underground lake with -0.8°C water. Red Bull set up a crazy crew to realize the first ever wake action in such an environment. During a two-day production we managed to get a cool action shot of Dominik Hernler, who completed this challenging task like a champ. With a 6.5mm wetsuit, he didn’t hesitate and was able to ride and turn in this very narrow location and under very difficult (AKA freezing) circumstances. In terms of photography, this was an extreme challenge as well, as we were facing extreme cold and moist and also very cold water. After more than three hours in the water I didn’t feel anything below my waist and one of my cameras failed as well. When Dominik finally arrived and pulled the action it was also a matter of luck if I got the camera to trigger at the right moment. Such a relief to see the image pop up on my screen and get the shot. Right after this shot the camera shut down and didn’t work for three days until it dried up completely.” 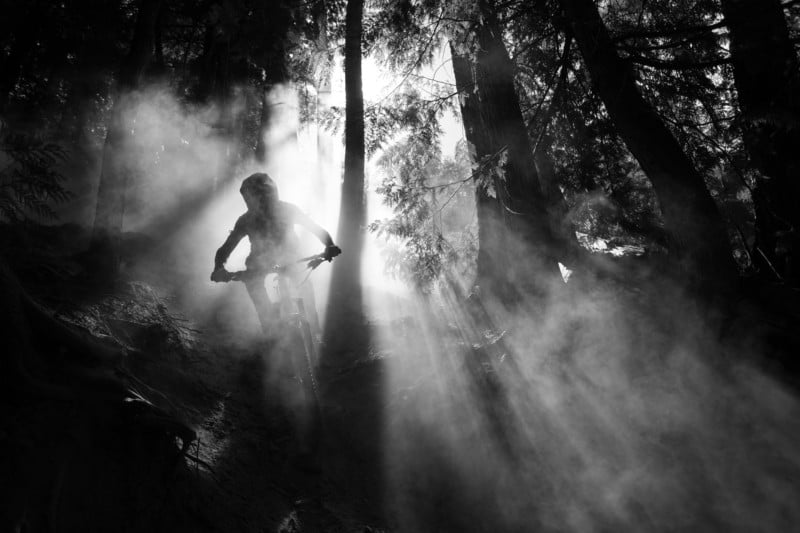 “Finding truly organic images in a world of well thought out ideas is a rarity, especially in the world of action sports.

“Playing with dust and light has always been one of my favorite ways to shoot mountain biking. It’s such a random process, with the dust and light different in every situation. This particular section of trail was super steep and local rider, Dylan Siggers, was in his element. This was his second or third time through this section and by this try, I had figured out exactly where he would be in the frame and captured the moment as he emerged from the dust perfectly.” 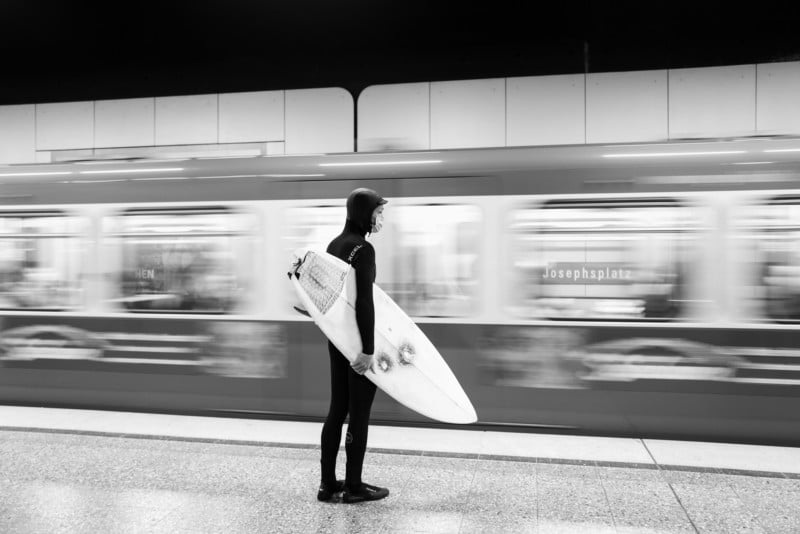 “The artist’s world is limitless. I love to fill up and create a room of energy, emotions, moments, and discovery, leave enough space for someone else to get there, show people around and let them dive deeper into different worlds they’ve never been to before.

“The shot ‘Surfmask’ is part of a series I’ve created with Peter Scherb in Munich in May 2020. I’ve always loved seeing Munich’s Eisbach river wave surfers all over the city. That’s why we joined Andi on one of his first sessions when the river wave reopened after lockdown in 2020. The shot shows him on his way to the Eisbach.” 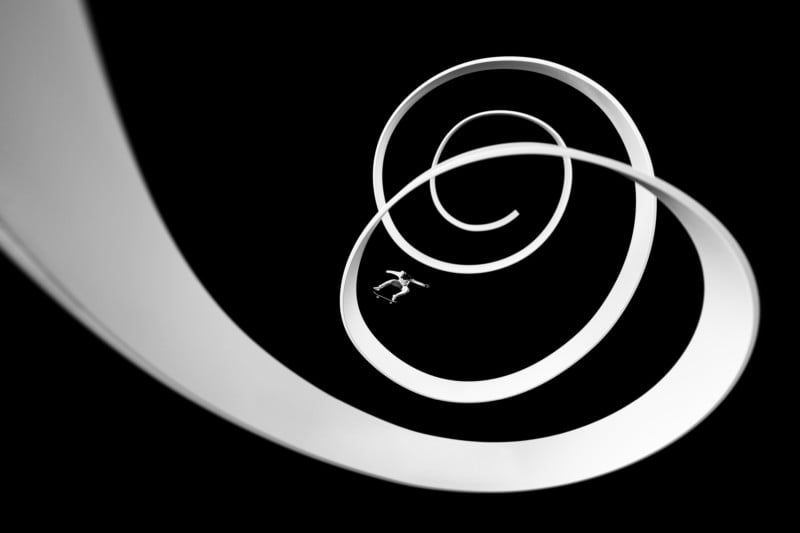 “My passion for action sports connected with photography has brought me into the world of inspiring people, breathtaking performances and amazing places all around the globe.

“The idea of capturing this shot snuck into my mind as a side effect from a campaign I produced based on an optical illusion called ‘forced perspective’. It sounds like a pretty sophisticated technique, but it’s basically exactly what thousands of tourists do when holding the leaning Tower of Pisa, hoping to get a unique photo of their holiday in Italy. It’s very similar for most adventure and action sports photographers. It doesn’t really matter if we’re on vacation, on a shoot, or just going on a random walk through the city – our imagination recreates interesting pieces of architecture into an action sports playground. With a tool like forced perspective, I felt like I could push it a little further, bending reality and bringing the athlete into an absolutely surreal environment.” 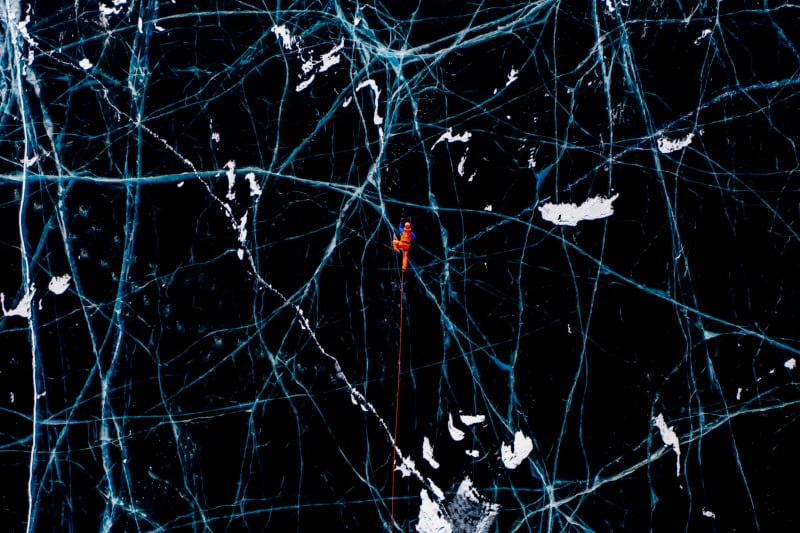 “Just be yourself, be honest and kind, people will appreciate it. For me, this is much more important than professional development or being the best.”

“In February 2020, we traveled to Siberia with Mammut Pro Team athlete Dani Arnold for a challenging expedition above the deepest lake on earth, Lake Baikal. Siberian winters present difficult and fascinating conditions. The successful expedition involved moving from the lake’s expanse of ice, to the vertical ice wall, and opening ten new climbing routes. We found favorable conditions, challenging Dani in his favorite ice climbing area.

“At this time of year, conditions are extreme, with temperatures as low as -35° Celsius; for this reason, virtually no athlete has attempted ice climbing above the deepest lake in the world. The challenge proved tough from the beginning; cold temperatures, poorly documented climbing areas, and an unknown language made the search for climbing areas very demanding, requiring a lot of energy from our team, mentally and physically. Since we could only move around the frozen lake on a hovercraft, just the search for the perfect shot proved to be a unique adventure, with technical breakdowns at nightfall, exhaustion of fuel and heating. The first steps on the ice of the lake were impressive – to see clearly through the thick ice of the deepest lake in the world was an extraordinary and absolutely unforgettable experience.” 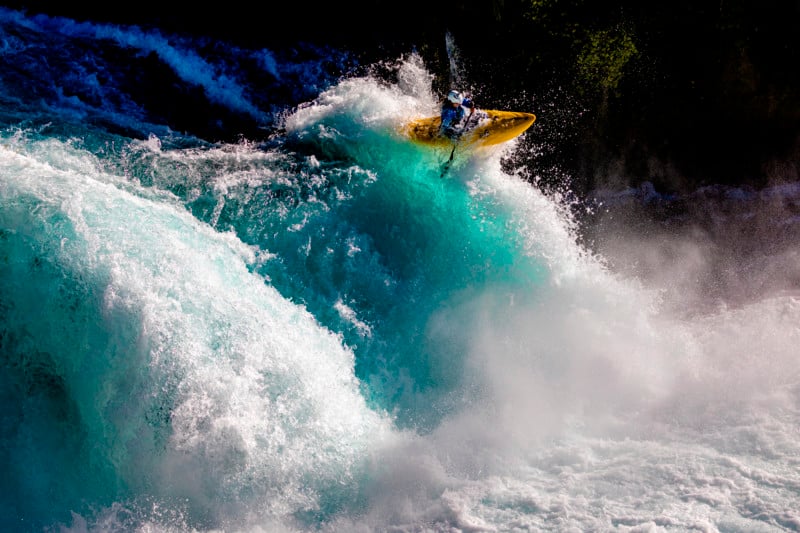 “Every day is a good day.

“This shot was not supposed to happen. River Mutton was supposed to leave for work but decided on one last run. I had already packed my gear away by the time they walked back up from the take-out point. Once they decided being late to work was worth it, it was a mad rush back down the river with my camera. It’s never a good idea to turn down a potentially fantastic photo opportunity. I didn’t have time to get to my normal spot, so instead, I tried this angle. All of a sudden, the light popped like I had never seen before. Straight away I knew this was going to work.”

All 2021 categories and winners, as well as past competition entries and winners, can be viewed on the Red Bull Illume website. An exhibition of the top 56 images is set to be displayed in Aspen Snowmass, Colorado.