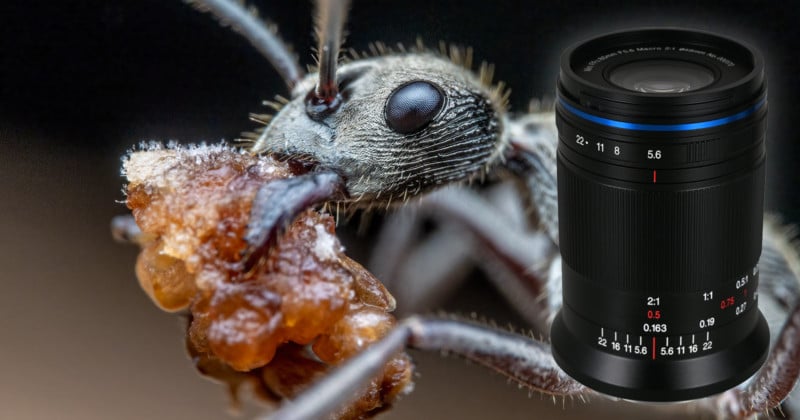 The new Venus Optics Laowa 85mm f/5.6 2x Macro lens is one of the smallest macro lenses that I’ve ever used for a full-frame sensor. It is even smaller than the Laowa 50mm f/2.8 2:1 for Micro Four Thirds, and that’s no mean feat!

The reason for a small f/5.6 lens is that very few photographers ever take macro shots at f/2.8. Of course, the small size does come with some drawbacks. In this field review, I’ll show the results from this lens and explain the practical considerations you’d have before deciding if this lens should go into your camera bag.

For this field test, I used a Nikon Z7 II kindly loaned to me from photographer Chris Ang and the sample lens was loaned from Laowa.

Should You Get This Lens?

As with every lens review, there are a number of pros and cons to each lens. Let’s get into the details here.

The Laowa 85mm F/5.6 2x is small and light, there’s no doubt about it. Here’s a quick comparison between other macro lenses for full-frame mirrorless mounts.

The Laowa 85mm is clearly a tiny and powerful beast, with its weight at less than half of that of most competitor lenses.

The Laowa 85mm is a completely manual lens with no electronic contacts. There is no auto-focus, but that really isn’t needed for high magnification work beyond 1:1. I recommend fixing the focusing ring at the desired magnification before taking the shot and moving the camera in slowly to get the subject in focus.

As a manual lens with no electronic contacts, there is, unfortunately, no aperture coupling. This means that the lens is stepped down at the current aperture setting when composing your photo. This is important for a few reasons.

Without a wide-open aperture while focusing, the image is very dark. Fortunately for most mirrorless cameras, disabling the live view exposure simulation alleviates that problem.

Another issue with stepped-down focusing is the loss of precision in the depth-of-field. The deeper DOF while focusing means that it is more difficult to get precise focus as more of the subject appears to be in focus. This will require a bit of experience in handling this lens to overcome. It is also mitigated slightly with focus peaking features on the camera.

The aperture ring is at the tip of the lens. Depending on your flash diffuser design, this aperture ring might be blocked by the diffuser, making it difficult to adjust the aperture while looking at the numbers on the lens. After some experimenting, I found that it was easier to turn the ring to f/22, and then click it down once for f/16, or twice for f/11. This way, there is no need to look at the aperture number.

A small lens diameter makes it easier for us to approach subjects without knocking into too many things. It also allows for better lighting for close-ups, since lenses with big diameters tend to block out light at the shortest working distance. The Laowa 85mm f/5.6 shines in this aspect with a filter ring of just 46mm. This is even smaller than the Laowa 50mm f/2.8 2x for MFT, which has a filter ring size of 49mm.

An important advantage of a smaller lens diameter is that using the Raynox DCR-250 would not be subject to vignetting. Vignetting makes these close-up filters unusable for big lenses like the Laowa 100mm.

Like most Laowa ultra macro lenses, the Laowa 85mm f/5.6 focuses from infinity to 2x. The working distance at 2x is at a comfortable 69mm. To boost your magnification, just attach a Raynox DCR-250 and you’ll get a decent magnification of about 4x.

The focus throw for this lens is shorter at approximately 160° when compared to other Laowa macro lenses like the Laowa 50mm 2:1 for MFT, which had an amazing focus throw of 215°. This won’t be a problem if you fix the focusing ring and move your camera in and out to get the subject in focus. But if you work on a tripod, the precise focus will be more difficult to attain. Then again, there is little reason to go for a lightweight lens if you are working on a tripod.

The working distance of this lens is 96mm at 1x, and 69mm at 2x. These are very comfortable numbers to work with. A relatively small flash diffuser would also suffice to cover the subject well.

With internal focusing and no recessed front lens element, less dust would get into the lens. Also, skittish subjects like jumping spiders would not be able to jump into any recessed areas of the lens.

The Laowa 85mm f/5.6 is very sharp, even with a dual-glass element Raynox DCR-250 attached. Areas of high contrast also show minimal to no signs of chromatic aberration. I personally use F/11 for 1x to 2x magnification and F/16 for lower magnification shots. This minimizes diffraction and light loss while maximizing DOF.

Comparison with Other Macro Lenses

The launch price for the Laowa 85mm f/5.6 2x is $449 for Nikon Z, Canon RF, and Sony E mounts, and $499 for Leica M mount. It is just a little bit cheaper than the Laowa 100mm and a little bit more expensive than I expected. But with the APO design and 3 extra-low dispersion lenses, the price is fair. There is also no other similar lens in the market to compare with!

I would personally pair the Laowa 85mm f/5.6 2x with a Raynox DCR-250. This covers a very good range for most macro subjects with a full-frame width of 8mm at 2x and 55mm at infinity. Using a small flash like the Meike MK320 matched with a concave diffuser and reflector would result in a very effective and compact setup.

As with most of my other lens reviews, I am focusing on practical use and field tests rather than studio tests based on specifications. A macro lens review must be based on its intended use. I tested this lens over 3 short sessions, but most of it was in the last session as I had spent the first 2 sessions fumbling with camera settings that I was unfamiliar with.

I used the settings below for most shots in this review.

I started simple at 1.25x on this shield bug.

Then I attempted close-ups at 2x, cropped.

As expected, stepping down to f/8 or f/11 was a little harder to focus as it was difficult to see where the exact focal plane was. This shot was pretty messed up as I shot it in low-quality JPEG and the white balance was way off:

At 1x, I tried f/16 but the light loss was significant and there was a bit of diffraction.

I also had some test shots at about 0.25x on this common wolf snake at f/16. Tack sharp!

One of the key features of this lens is its 2x magnification so most of my shots would be at its maximum magnification. This was shot with the Raynox DCR-250 attached at f/11:

This treehopper stood pretty still, so I was able to do a stack of 3 shots for this photo:

I found lots of pseudoscorpions. Those familiar with these arachnids would know how small they are. This individual has a mite attached to it. Approximately 50% crop.

This stalk-eyed fly was always on the move, so stacking wasn’t possible. At f/11, the DOF at this magnification is pretty thin, so only 1 eye was in focus.

I was pleasantly surprised to find this owlfly larva nestled comfortably on the fiber of a mossy rope. It was really wet, but there’s so much detail on its body!

There were lots of harvestmen perched on the railings, so I did a 5-shot stack on this individual at maximum magnification.

These red maggoty springtails are really beautiful when viewed up close, like little gummy worms.

This shot is out of focus as I couldn’t get these little guys to stop moving. But… so cute!

This is a poorly processed stack from 3 shots. But the details on the beetle’s elytra are pretty much retained!

Some of these shots have missed frames in the stack due to problems with my camera settings. Purely my problem as I was new to the camera.

During my night shoot, Melvyn kindly pointed me to this trilobite beetle. Look closely and you’d see a little springtail on top of it:

Close up of its head at maximum magnification. I was happily getting used to this lens!

Close up of its dorsum. It was a really wet night and raining half the time, hence the water droplets.

And one of my favorite angles for most trilobite beetles!

Just one log away, I found 2 other trilobite beetles of a different species. Same same but different.

On one of the logs, I found this highly cryptic mud spider. It was about 5mm, an ideal size for this setup!

Still on the same log was this black pill cockroach. These little guys conglobulate when disturbed, like pill bugs and pill millipedes.

Amazingly, this bug is pretty common but this is the first time that I’ve ever photographed it. I’ve seen it on numerous occasions in the past but never had my camera with me. Tilt your head to see the “man-face”. This is also often called the Elvis Presley bug.

Vince kindly showed me this scale insect, probably immature or a female.

The only way to see its eyes, from beneath!

This is a very common derbid planthopper. Interestingly, we’d only see its pseudopupils in the day.

Also found this super tiny treehopper nymph. It kind of mimics a thorn and is often accompanied by ants who offer it protection. In turn, it produces sugary substances for the ants in a symbiotic relationship. This is from a single shot and heavily cropped.

This huntsman spider was busy with its prey on a tree, so it was an easy target. Just one shot for testing.

This moth-like planthopper had see-through membranes on its wings, so I positioned a flash behind it. The points of high contrast showed little to no chromatic aberration.

Found another individual bringing food back to its nest. This is also single shot following a moving subject.

These planthopper nymphs were about 4 to 5mm in size, but there are lots of details on their bodies!

Interestingly, I found several of these red velvet mites on fallen logs.

Finally, I was lucky to get these 2 planthopper nymphs together and in focus. The small one was walking around and only perched in position for a few seconds before walking off again. The fireworks-like waxy tails are often a treat to photograph!

This is a limited field review with photos from three short field trips, during which, most of the time was spent getting used to the camera body and its settings. Despite this, most of the initial issues faced could be overcome and I got quite comfortable with using the lens. To see the other photos, I have compiled them into a Flickr album.

The Venus Optics Laowa 85mm f/5.6 2x is a tiny yet powerful lens. It is sharp, compact, lightweight, and produces great images. It is just shy from being perfect due to the lack of aperture coupling, something that I wish would make more progress in Laowa’s macro lens lineups.

You can order the lens directly from Venus Optics or MacroDojo — purchasing via MacroDojo helps me out a little bit.