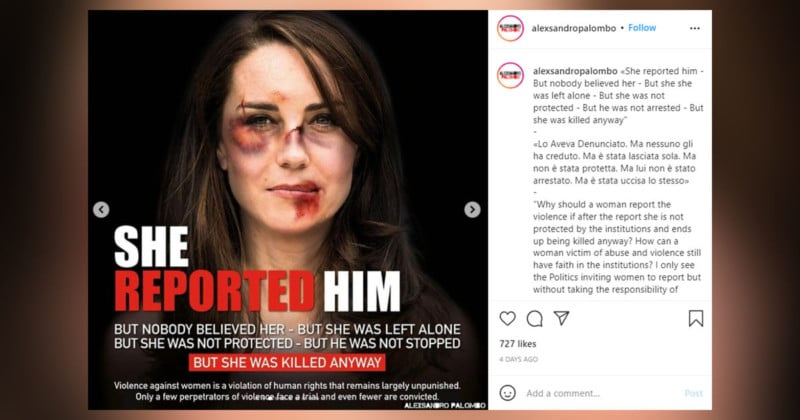 Photos of Kate Middleton and other high-profile women have been heavily Photoshopped as part of a domestic violence campaign on Instagram, which has sparked anger from some users while others have praised it for raising awareness.

The man behind the graphic campaign is aleXsandro Palombo, an Italian multimedia artist. Palombo’s work has been exhibited at Anya and Andrew Shiva Gallery in New York City, Mak Gallery with venues in Poland, the United Kingdom, and Italy among others.

The Anya and Andrew Shiva Gallery, for example, describes Palombo’s work as provoking “observers to answer and interpret the world documented, analyzed and painted by the artist.” His past work “addresses anything from indifference to the political and social disorder of our times.”

Palombo’s recent project has split the public, with some denouncing his unauthorized use and editing of famous women’s photographs as part of his efforts to raise awareness on domestic violence.

Palombo’s project features a series of images that show powerful women, such as Duchess of Cambridge Kate Middleton, German politician and President of the European Commission Ursula von der Leyen, Vice President of the United States Kamala Harris, and others all Photoshopped to show the bruising and injury that would come as the result of the kind of physical attack indicative of domestic violence.

On the posters, Palombo writes that “violence against women is a violation of human rights that largely remains unpunished. Only a few perpetrators of violence face a trial and even fewer are convicted.”

According to Joe, some Instagram users believe Palombo’s approach is distasteful while others thank him for bringing the issue to light. One Instagram user, Yasmin, commented “thank you for making us confront the difficult reality, we need to be more responsive and determined as a society to save every single person from domestic violence.”

The Royal family has not responded to the use of doctored Kate Middleton’s photos and according to My London, posters of the campaign have already been displayed across bus stops and buildings in Milan and Spain without asking for permission from the women portrayed. It is not clear if Palombo has officially licensed the photos either, further muddying the issue.

This is not the first time Palombo has raised awareness of violence against women through impactful imagery. At the start of 2020, similar photos of Hillary Clinton, Angela Merkel, Michelle Obama, and others also appeared on the streets of Milan, as reported by France24.

In 2015, Refinery29 noted that Palombo also used Hollywood and reality TV celebrities like Kendall Jenner, Angelina Jolie, Kristen Stewart, and others as his canvas. At the time, the publication criticized Palombo’s work as barely scratching the surface of domestic abuse and accused him of fetishizing violence and vulnerability of women.