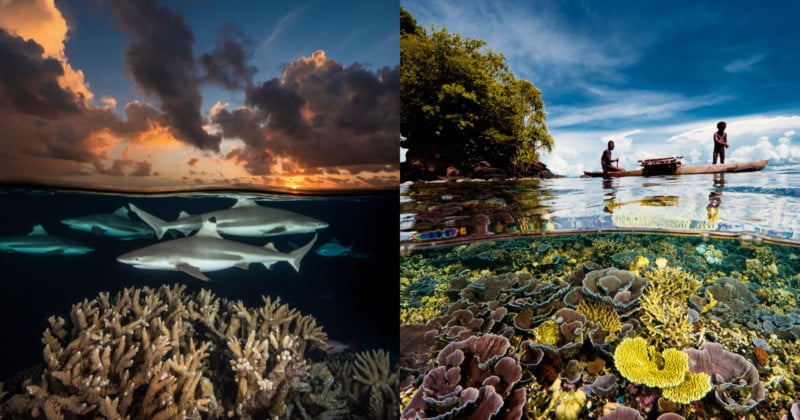 David Doubilet, known as a pioneering underwater photographer, has released a photo book that spans decades of his work and shows the symbiosis of the mysterious underwater world and the more familiar surface captured together in a single image.

Doubilet is widely acclaimed as one of the world’s leading underwater photographers and has been a regular contributor to National Geographic for decades. Today, Doubilet has revealed his “Two Worlds: Above and Below the Sea” photography book which encompasses decades of documenting the ocean and the still largely unexplored underwater world. 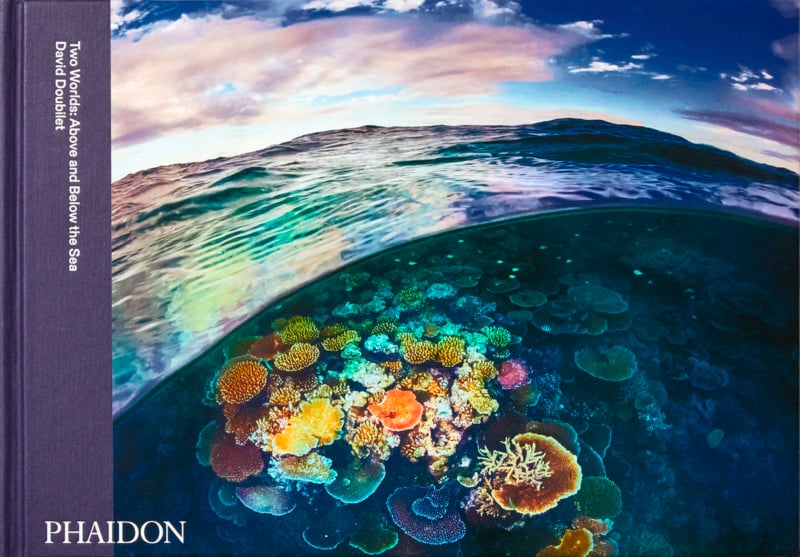 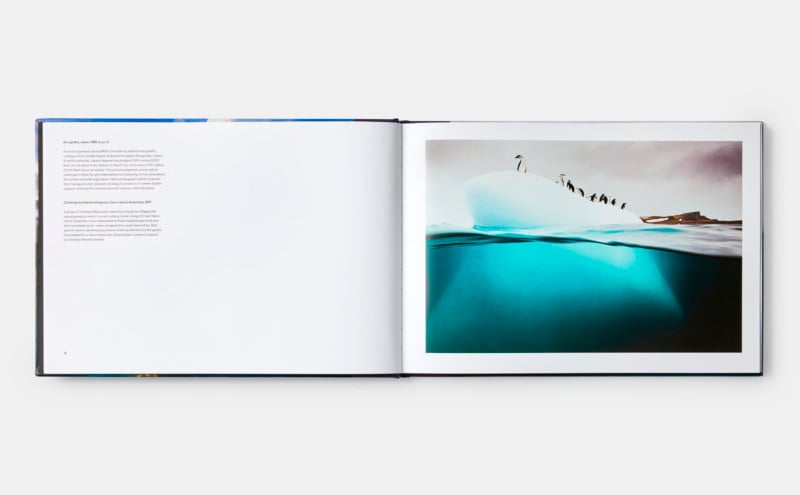 Doubilet discovered his passion for outdoor exploration during a summer camp as a kid when he was given a mask and sent under a dock to pick up sticks and “meet the dreaded giant dock spider as punishment” because he did not want to hike. Since that moment, he has been mesmerized with the life underwater and at the age of twelve, his father used an anesthesiologist bag to create an underwater camera housing for Doubilet’s Brownie Hawkeye camera, giving him a taste for what’s to come later in his career.

He published his first story during his teen years and went to collaborate with National Geographic in 1971. Five decades and 75 stories later, Doubilet still sees every dive as a discovery.

“I still search for the elusive half and half image and I continue to nudge photographic boundaries to see where we can make technological advances,” he says.

The idea for his Two Worlds projects arose early on; Doubilet has always been fascinated with the surface of the sea “as a door to a hidden world”, he tells PetaPixel. 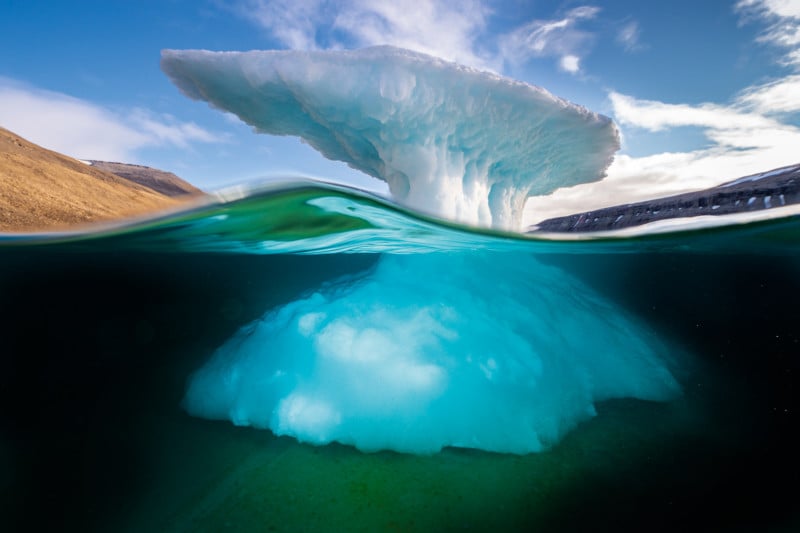 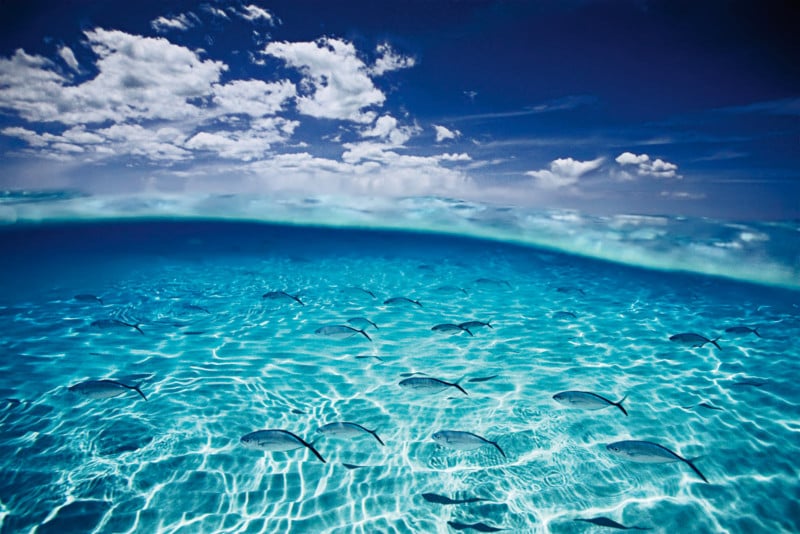 “Fast forward to assignments in the remote corners of the world where I began to slow down and look as I descended. I saw corals sloping upwards to the surface meeting rainforests tumbling to the edge. I began lingering at the boundary of surface and sea, recognizing it as our largest most important border on the planet.”

This is where the experiments of capturing half and half images in a single frame began. For Doubilet it is a thrill, knowing that a person on the surface has no idea of the fascinating and rich life that can be seen just beneath the water. 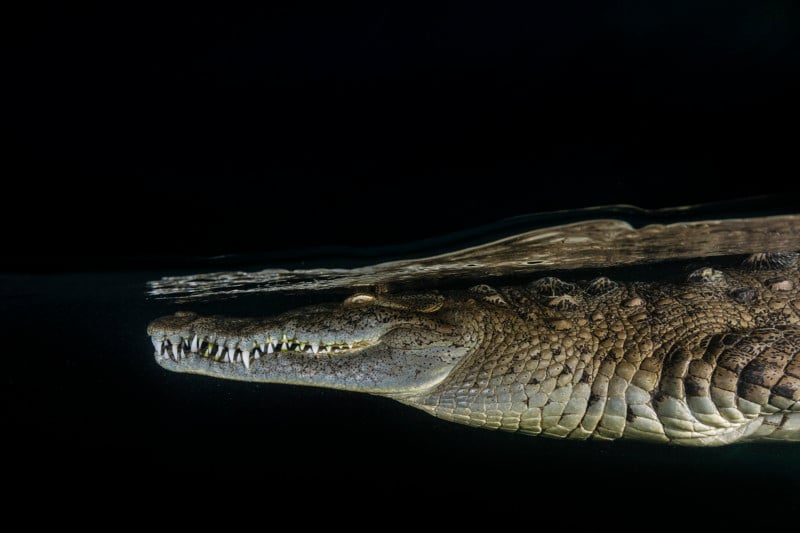 The project includes images taken throughout Doubilet’s underwater career and spans Papua New Guinea to Grand Cayman Island, from the icy waters of the Antarctic Ocean to the tropical Great Barrier Reef. He has captured rare sea creatures, corals, plant life, and the unique underwater landscape — all of which help highlight important climate change and marine life conservation issues. 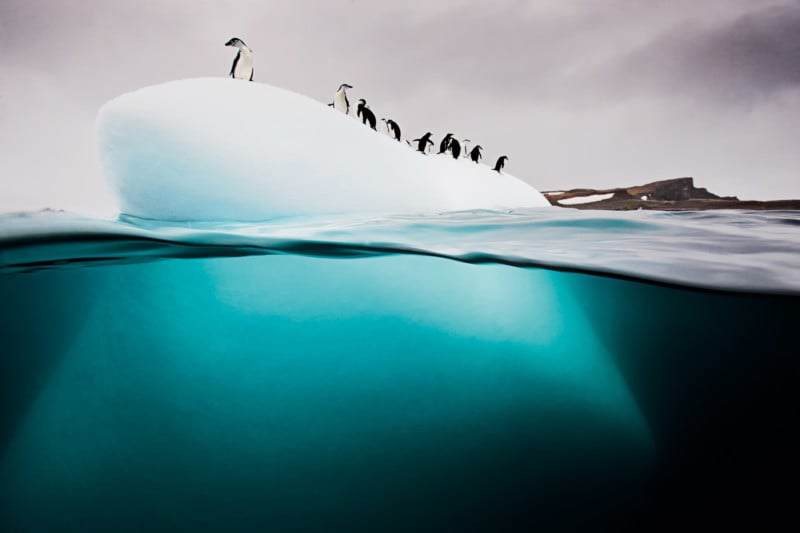 Although an exciting experience, it can be labor-intensive to create images like these. Doubilet uses a variety of Nikon cameras in SEACAM underwater housings which are equipped with a range of wide-angle Nikkor lenses, behind a 9.5-inch optical glass super dome. The dome corrects the 33-percent underwater magnification and spreads the boundary layer of the surface across the curvature of the dome.

When Doubilet shoots, he has to kneel or stand very carefully; sometimes he even floats with the housing and dome half in and half out of the water. He lights the bottom half of the frame with two or more Sea and Sea YS 250 strobes. 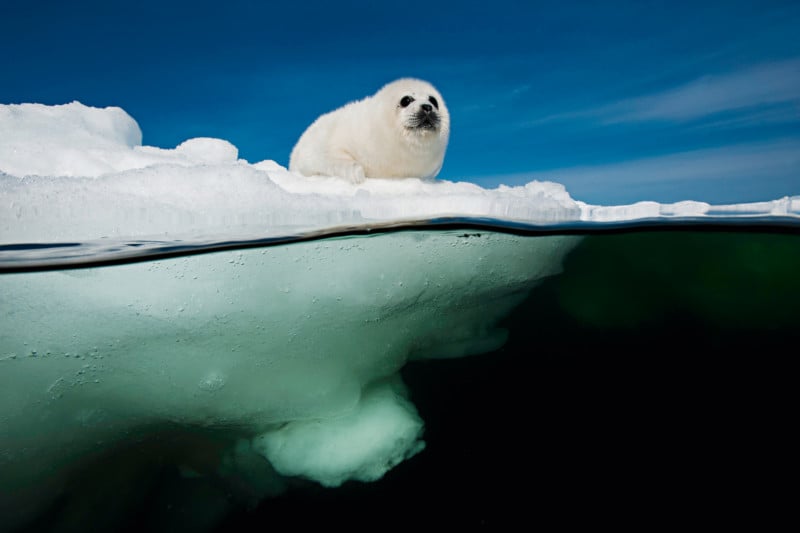 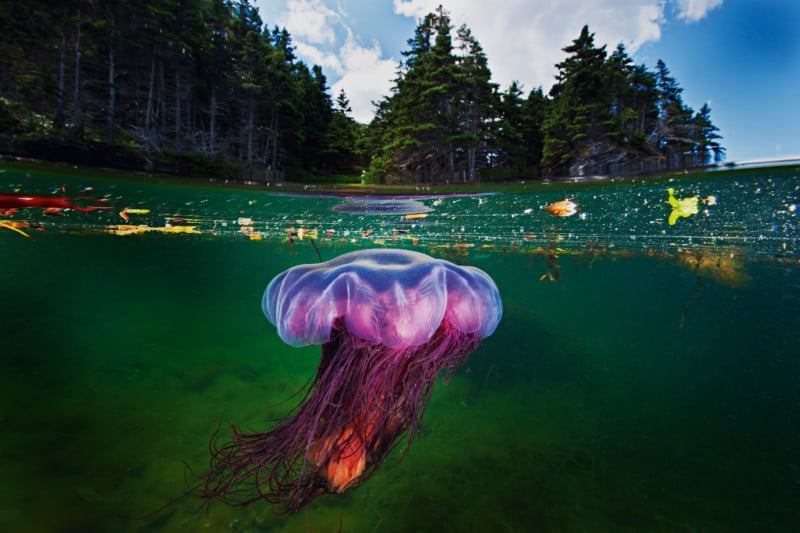 The most challenging aspect of this type of work is finding two compelling subjects in a single frame to illustrate the essence of the place that Doubilet is shooting in.

“Although I am driven to look for two world moments on every dive, the images themselves remain rare,” he explains. “In five decades and 75 stories as a National Geographic photographer, I have only produced a few dozen of these images that I truly like.” 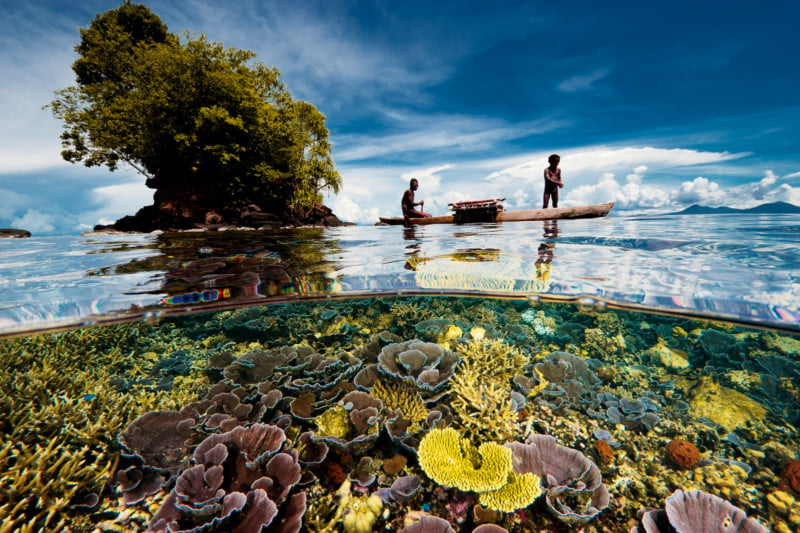 “The largest border that impacts every single person on this planet is not etched in ink, it is the surface of the ocean. It is a portal into that other 71-percent of our planet. No matter where we live, coastal or inland, we depend on the oceans to produce oxygen and resources that we rely on.” 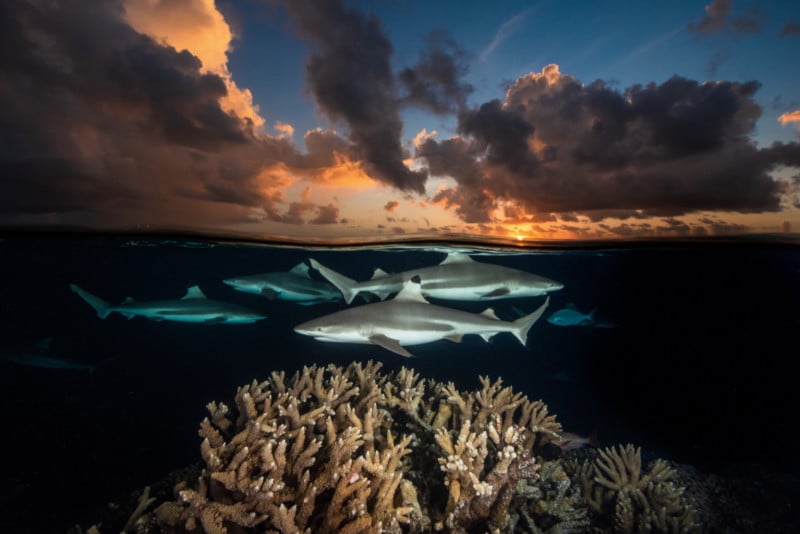 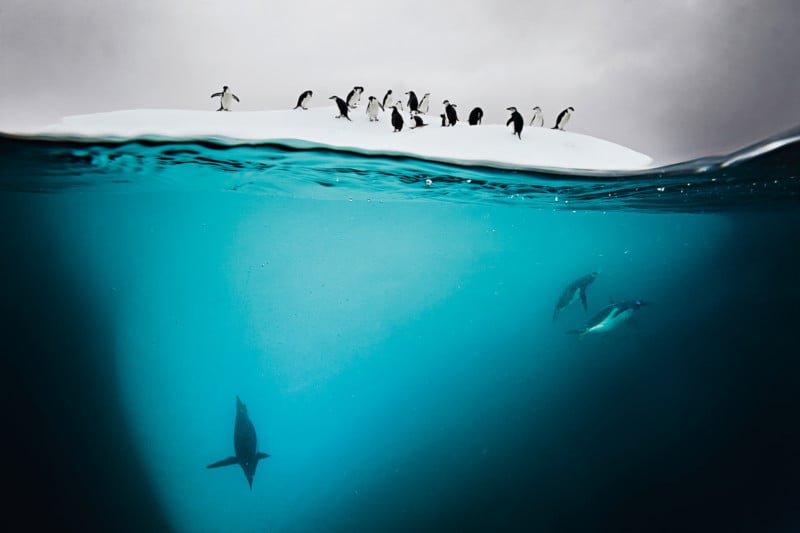 As challenging as underwater photography is, Doubilet doesn’t plan on stopping and hopes that his project connects people to the sea. The newly published book is an invitation for the audience to enter into this world: “to see, know, explore, connect with, and protect the oceans.”

Doubilet’s “Two Worlds: Above and Below the Sea” book is available for $60 and can be found on the Phaidon website, with more of Doubilet’s photographic work available on the Undersea Images website.

Image credits: All images by David Doubilet and used with permission.