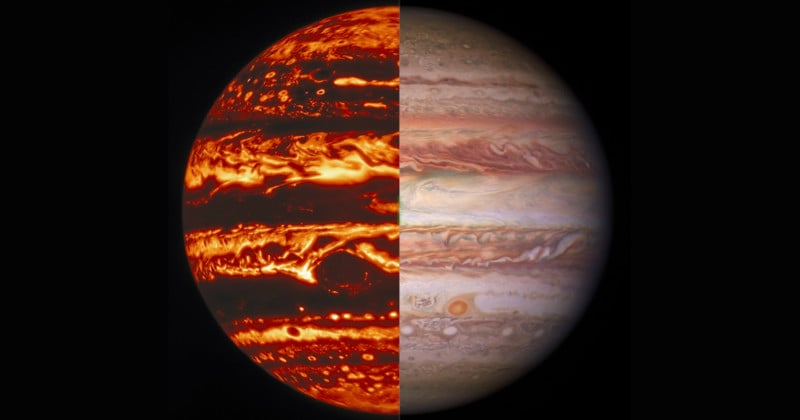 NASA’s Juno probe, which is currently orbiting Jupiter, has provided a more detailed picture of the process that makes up the clouds found in the gas giant’s atmosphere. These first-ever 3D images show the structure of its numerous vortex storms.

“These new observations from Juno open up a treasure chest of new information about Jupiter’s enigmatic observable features,” said Lori Glaze, director of NASA’s Planetary Science Division at the agency’s headquarters in Washington. “Each paper sheds light on different aspects of the planet’s atmospheric processes – a wonderful example of how our internationally-diverse science teams strengthen understanding of our solar system.”

The 3D imagery was captured using Juno’s microwave radiometer (MWR) which NASA says allows mission scientists to look beneath Jupiter’s dense cloud tops and see the structure of its many vortex storms.

NASA explains that Jupiter’s banded appearance is created by the cloud-forming “weather layer.” The composite image above shows views of Jupiter in (left to right) infrared and visible light taken by the Gemini North telescope and NASA’s Hubble Space Telescope, respectively.

The 3D images highlight the inner workings of the “belts” and zones of clouds that circle Jupiter which includes the polar cyclones and the aforementioned famously huge Giant Red Spot that is iconic of the gas giant which NASA writes has intrigued scientists since it was discovered nearly 200 years ago. Speaking of that spot, the illustration below combines an image of Jupiter from the JunoCam instrument aboard NASA’s Juno spacecraft with a composite image of Earth to show just how huge that one storm is.

The details gathered by Juno also indicate that the storms are much taller than previously expected and some extend 60 miles below the top of the clouds downwards. The Great Red Spot is even more impressive, as it extends more than 200 miles. NASA says this surprise discovery demonstrates that the vortices cover regions beyond those where water condenses and clouds form, below the depth where sunlight warms the atmosphere.

The video below, shared by DPReview, is a great overview of what is currently known about Jupiter and what Juno has already helped scientists discover.

The Juno mission has been extended to at least 2025.