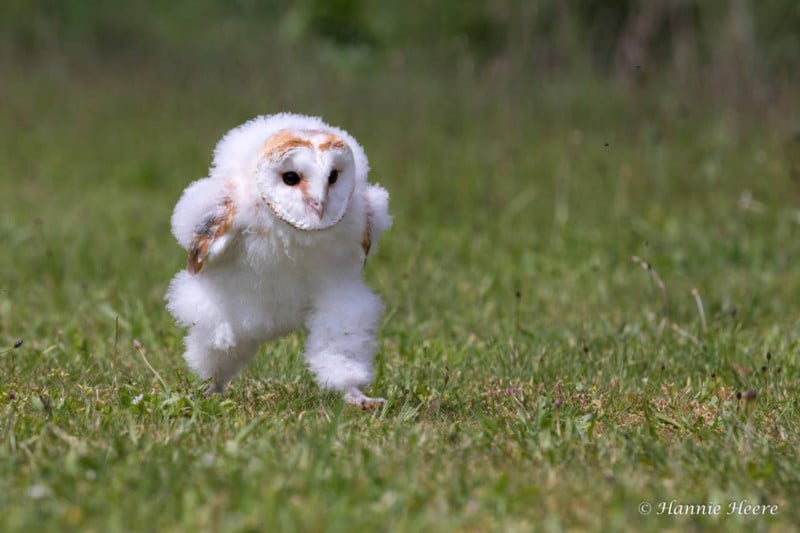 Dutch photographer Hannie Heere was photographing barn owls when she captured an adorable shot of a baby barn owl running across grass.


Heere is 63-year-old and lives in the city of Dordrecht in The Netherlands. While she has always enjoyed photography throughout her life, she did not start taking it seriously until her children became adults and left home. In 2016, she began taking courses and workshops, and her primary focus has been on nature and wildlife photography.

On May 28th, Heere was out shooting when she spotted a confident small owl chick nearby. It was fluffy with white down, which are replaced with mature feathers as the owl grows old enough to fly.

Barn owlets start flapping their wings at seven weeks, making short flights around the nest at eight weeks, and becoming competent flyers by 10 weeks, at which point they look like adult barn owls.

Before learning to fly, however, baby owls work on developing their muscles, and this particular baby owl had apparently decided to do so by going for a run.

“I was laying on the ground,” Heere tells PetaPixel. “This young bird count not fly yet and was not afraid. I took the picture from a distance of about 5 to 6 meters [~16 feet].”

This photo went somewhat viral after Heere published it online, and it has been widely shared across social networks and as memes.

“I was very, very surprised [at how popular the photo has been],” Heere says. She adds that while photography has been a hobby up to this point, she would love to be able to take her nature photography to the next level by earning money from it.

You can find some of Heere’s work and connect with her on Facebook.

Image credits: Photograph by Hannie Heere and used with permission