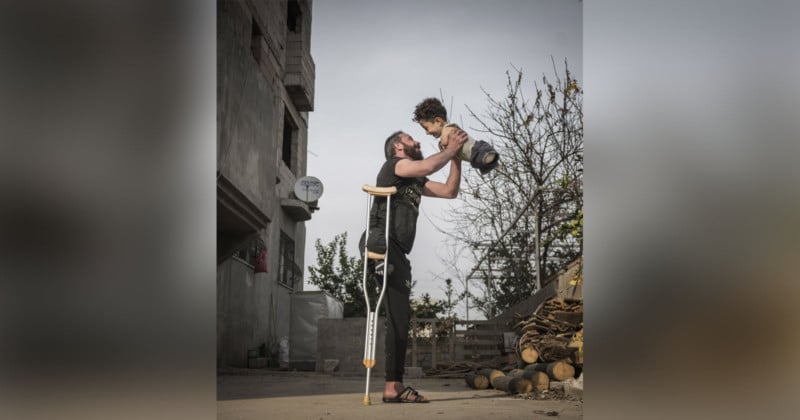 A powerful photograph of a one-legged Syrian father holding his son born without lower or upper limbs has been recognized as the Siena International Photo Awards (SIPA) 2021 photo of the year.

The SIPA competition is open to all photographers from around the world and is broken down into twelve categories: “Street Photography,” “Journeys & Adventures,” “Fascinating Faces and Characters,” “The Beauty of Nature,” “Animals in Their Environment,” “Architecture & Urban Spaces,” “Sports in Action,” “Documentary & Photojournalism,” “COVID-19,” “Under 20,” “Storyboard,” and “Video: General.”

The contest received thousands of images submitted by photographers from impressive 163 countries, with winners to be displayed in Siena, Italy starting on October 23, 2021 as part of the Siena Awards festival of visual arts.

The winner of the “Photographer of the Year” title is awarded €1,500 (about $1,745) worth of photography equipment, a “Pangea Prize” crystal statuette, and other promotional prizes and opportunities.

The Photographer of the Year 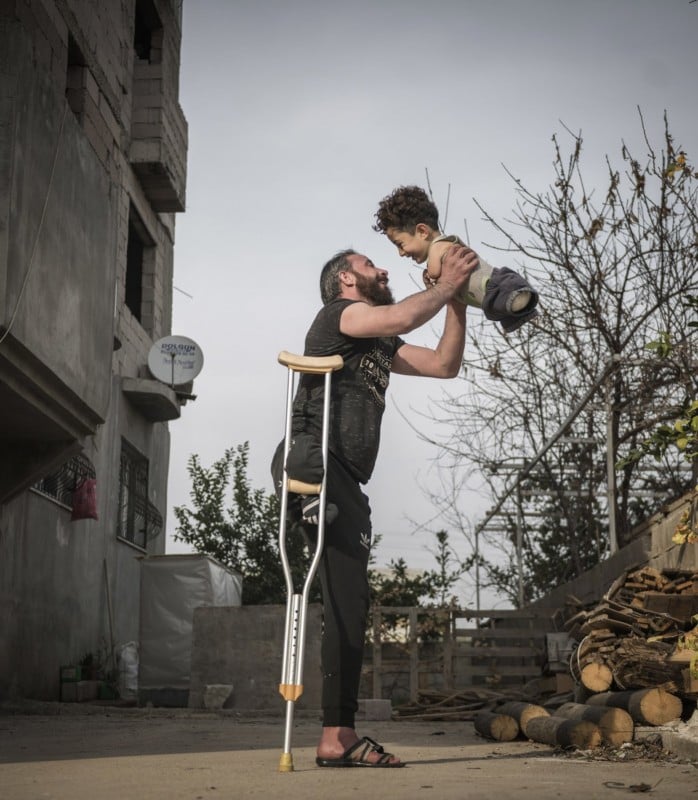 Turkish photographer Mehmet Aslan was recognized as the overall winner in the competition with his photo titled “Hardship of Life.” It was taken in the district of Reyhanli, in the Turkish province of Hatay, at the border with Syria.

It depicts an emotional moment between a father who has lost one leg and who is holding his son who was born without limbs due to a congenital disorder caused by the medications his mother had to take after being sickened by the nerve gas released during the war in Syria.

“The happiness of the father and his son, even as the man stands on one leg, it is very precarious,” says Kataoka Hideko, Director of Photography at Newsweek Japan and one of the judges on the panel. “My heart, briefly saved by this moment of joyful love, is overshadowed by the long and hard lives they face ahead, a great cost left by the war.” 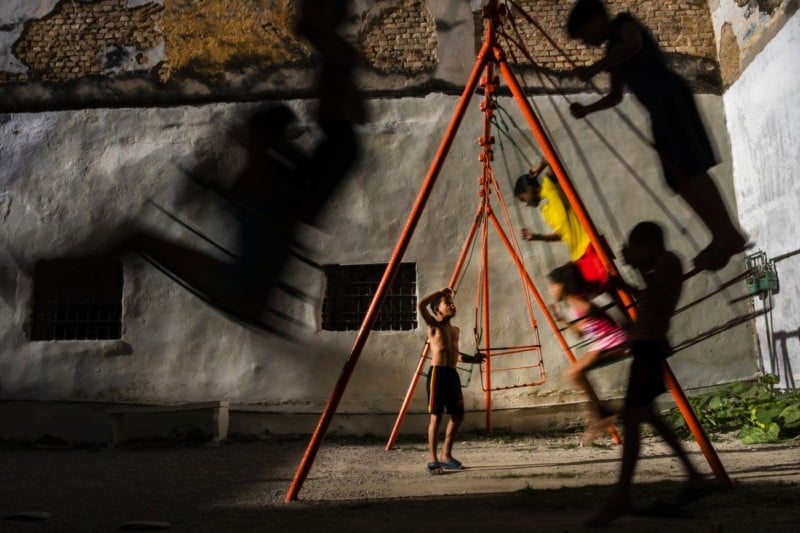 Indian photographer Lopamudra Talukdar won the first prize in the “Street Photography” category with the image “Childhood.” It shows children in Havana enjoying themselves by playing in the open air in their homes’ courtyards. 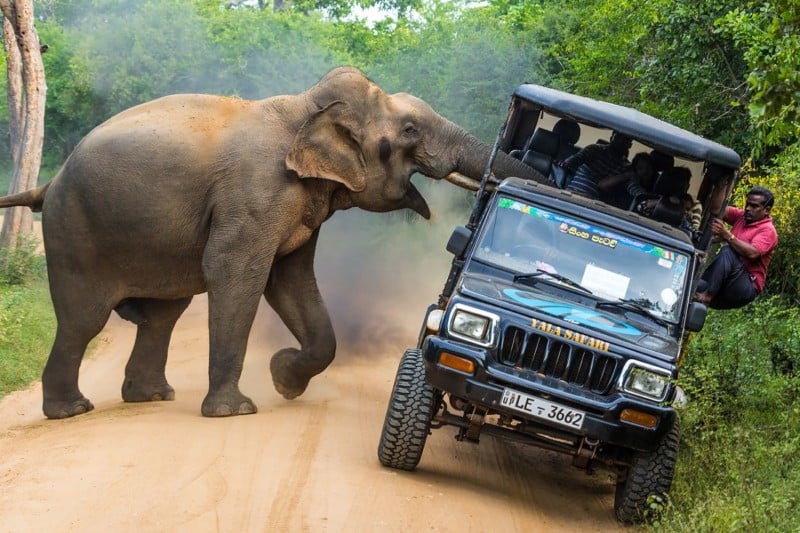 Sergey Savvi, from Russia, won the category with his “This is My Jungle!” picture. It was taken in Yala National Park, in Sri Lanka, where a wild elephant attacked a jeep full of people. 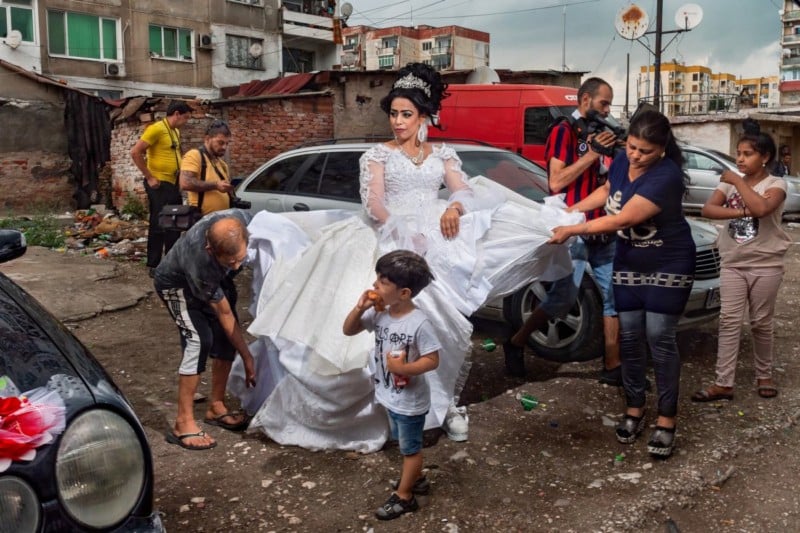 The image, titled “Zor,” taken by Italian photographer Selene Magnolia was recognized as the winner in this category. Taken in the city of Plovdiv in Bulgaria, it shows a young bride as she is preparing for her wedding on a street in the crowded Roma ghetto of Stolipinovo.

The Beauty of Nature 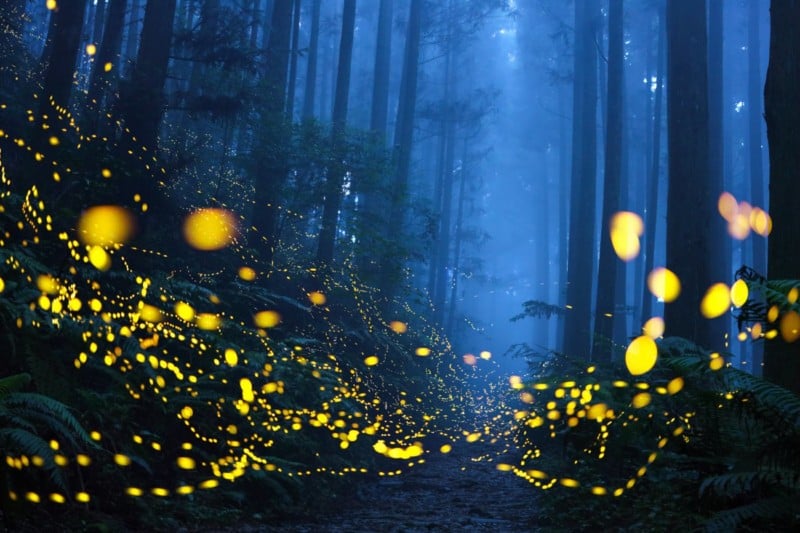 “Green Light Forest” by Taiwanese photographer Shirley Wung won the “The Beauty of Nature” category. Shot in Wufeng, Taiwan, it captures a mountain path in the middle of a forest, illuminated by a multitude of sparkling fireflies that give the landscape a fairy-tale atmosphere.

Animals in Their Environment 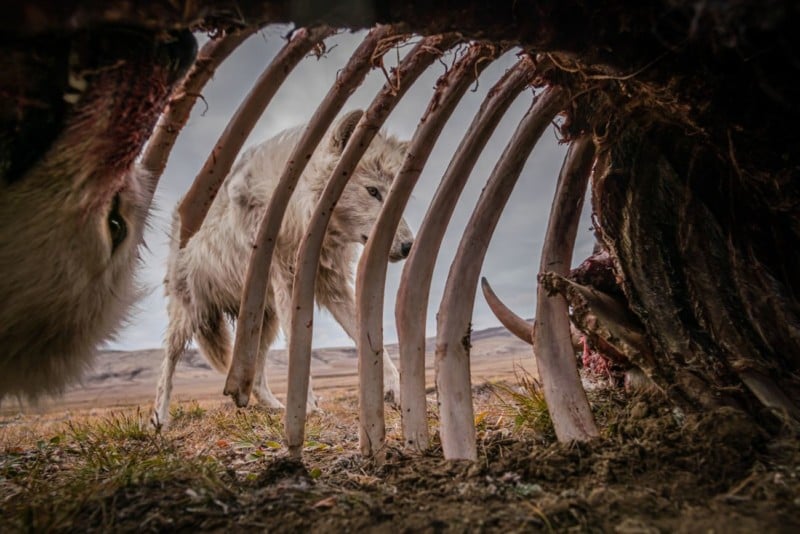 American photographer Ronan Donovan won in the wildlife category with his image “Food for Weeks.” It was shot with a camera trap, placed inside of a large muskox carcass. It was used to take the winning shot of a pack of ten wolves, the members of which returned to feed for over a month. 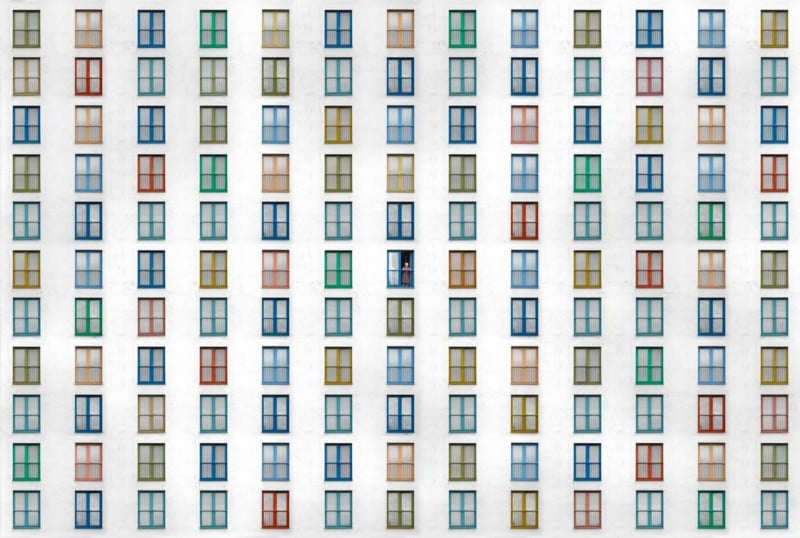 Italian photographer Gustav Willeit was recognized as the winner of the “Architecture & Urban Spaces” with “Lona/Biala.” Shot in London, the image is from a project about urban architecture where pictures don’t show entire buildings and instead just a chosen part of the facades. 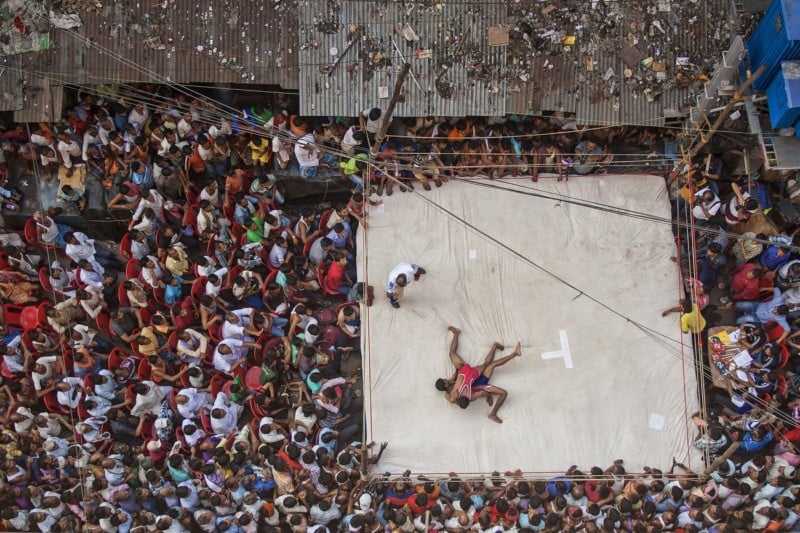 The aerial image, titled “Street Fighting,” by Indian photographer Anupam Roy Chowdhury is the winner in “Sports in Action.” It documents local wrestlers fighting in a match within the Raja Katra market area at a tournament on the occasion of Diwali — one of the most important festivals in India. 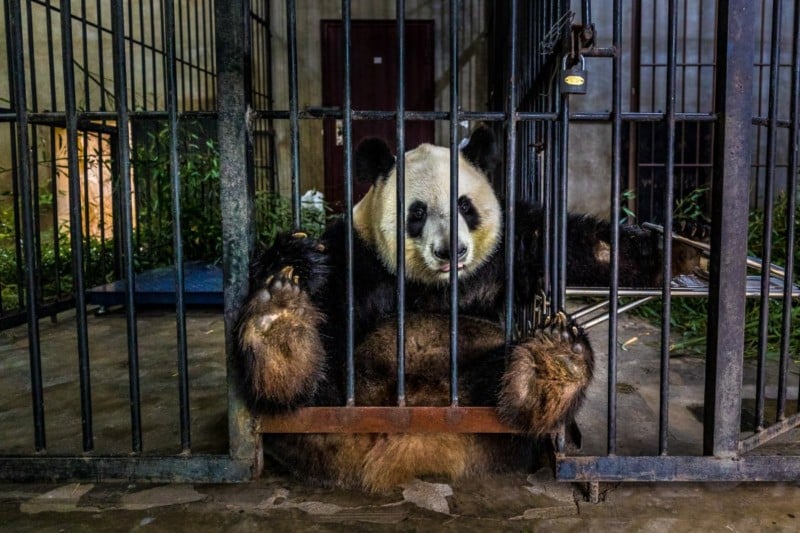 The top spot in this category was earned by photographer Marcus Westberg from Sweden. His photograph “Captive” shows a portrait of a giant panda sitting alone in a facility in Shaanxi, China.

The photographer depicts a juxtaposition between the intentions expressed and the reality on the ground where a wild animal is kept in a cage in the name of conservation and re-population of wild habitats. 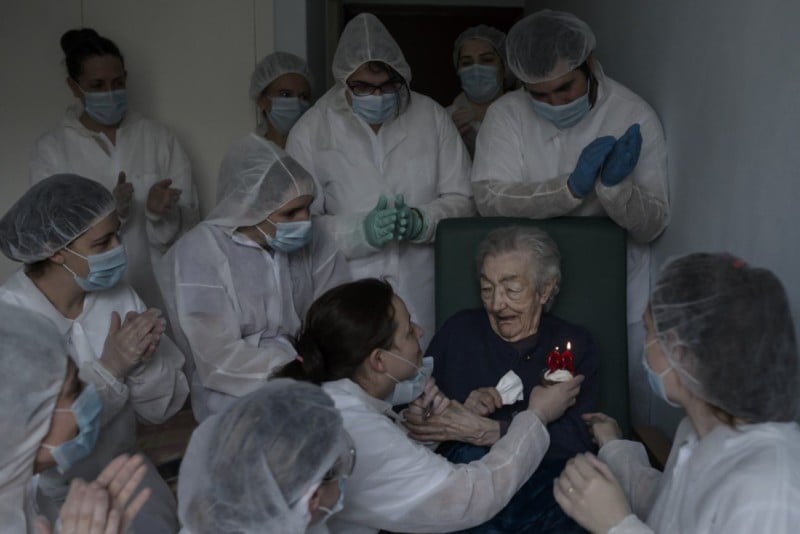 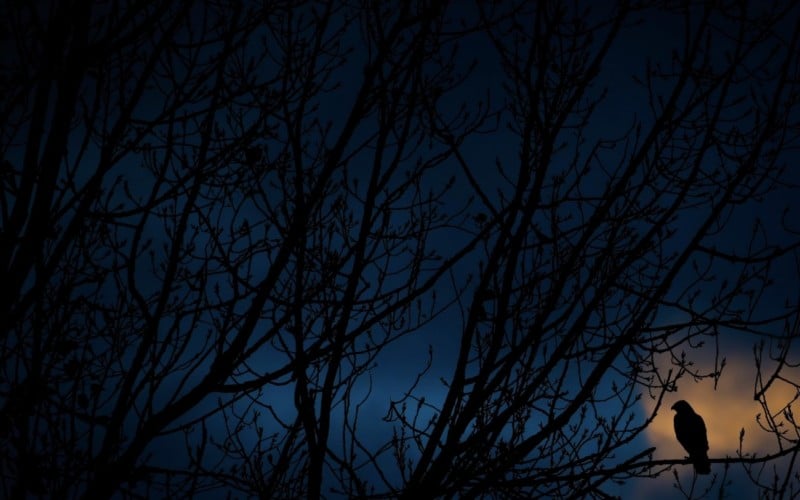 “Buzzard at Dusk” by Ben Pulletz won the “Under 20” category with an atmospheric and moody shot of a buzzard, sat on a tree branch, with a small light patch behind it.