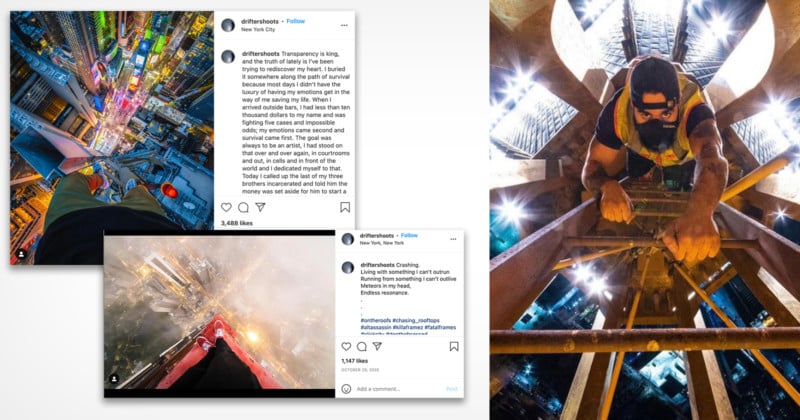 Isaac Wright was arrested in January for operating the Instagram account DrifterShoots, where photos show him trespassing and breaking into multiple buildings to capture dramatic images. He is now selling those photos as NFTs.

In an interview with One37PM, Wright explains how he got into his photography and admits to climbing buildings around the United States in order to capture dramatic and expansive vistas.

“I got this itch one night to drive to Houston. I saw this construction site, and made my way up 50 floors,” Wright says. And from that perspective of 50 floors up, “I had the world in my hands. I felt so incredibly small. Every mental stress was completely gone.”

He also admits to climbing a major construction site in New York City off of Columbus Circle, saying the experience made him want to do it forever.

“We as humans are just a small speck in the grand scheme of something far greater,” says, and explains that the climbs give him “a level of humility, but also wonder and love. I feel that every time I climb.”

In an interview with the New York Times, Wright says that after he left the military, he quickly felt disillusioned and helpless as he struggled with post-traumatic stress disorder and suicidal thoughts. He says that climbing helped.

Wright was arrested in Arizona after a warrant was issued for his arrest in Cincinnati, Ohio in January. Wright was charged with burglary for breaking into an office building so that he could climb to the metal crown atop it and was also accused of photographing the Great American Ballpark after illegally climbing a light post.

Cincinnati Police Detective Jeff Ruberg chased Wright across states for months, alleging that Wright was using pry bars, lock picks, and disabled security cameras and motion sensors which caused damage to buildings en route to his death-defying climbs. Ruberg agreed that the photos he captured were great, but argued that Wright was breaking the law and needed to be stopped.

Wright says that he was unaware that his exploits had made him the object of a multi-state manhunt and argues that his “victimless” crimes of urban exploring are usually met with misdemeanors in other cases, but that he was specifically pursued to the fullest extent of the law because he is Black.

“When you’re not visible, like a lot of people in the system are, especially black men, then they can pretty much do whatever they want to you,” Wright says. “It just was so significant to me, because I didn’t know… I was living my life, my truth and my purpose. I didn’t know that sometime in my near future, I would be hunted down and arrested and go through something really awful.”

Wright’s bond was set at $400,000, much more than he says he could afford, because the District Attorney argued his military background made him potentially dangerous to the community. Wright feels as though he was being punished for his time spent in a uniform. His bail was eventually reduced to $10,000, but days after returning home he was arrested again over additional footage that showed him scaling a city bridge.

Since he can no longer climb and his legal situation is still in flux, Wright has turned to NFTs as a way to share and sell his work. Wright argues that NFTs are putting power back into the hands of artists and that it gives them financial freedom that they can invest back into making better art.

Wright’s OpenSea gallery titled “Where My Vans Go” is a collection comprised of 115 images created over the span of three years he spent exploring the United States. The first image listed in the collection, #23, is currently listed for 38 ETH, or $144,925.

“From coast to coast, between borders and beyond, this series represents the journey that has forged the person and artist that I am today,” Wright writes. “By following my vans on this vast journey through time, I hope you will feel every step and heartbeat, I hope you will rise above fears with me. If this journey has taught me anything it is that everything is about our struggle and process, if you never climb, you never see the view. This is the climb. In snow and fog, sunshine and rain, from the tops of skyscrapers and bridges, here I learned to do whatever it takes. These are the shoes that made me.”

While Wright has stopped climbing, he says he does not feel as though he has a way to deal with the stress which has been made worse by the growing number of criminal cases being filed against him.

“Not everything illegal is immoral,” he says. “What if this is a victimless crime that brings something wonderful to the world, inspires and helps people?”