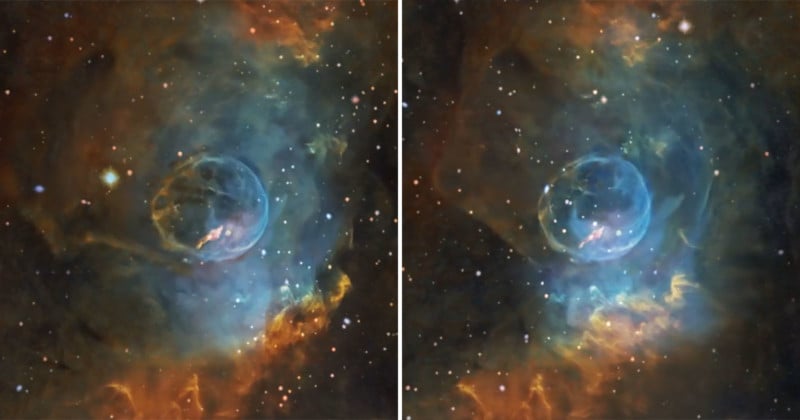 Photographs of space are usually flat, telling viewers nothing about the relative distances of stars and galaxies seen in the frame. Finnish astrophotographer J-P Metsavainio has decided to change that by creating amazing 3D conversions from his 2D photos.


“As an artist, I like to find new views of reality,” Metsavainio writes. “My models are not just guesswork — the conversion is based on real scientific data.

“For as long as I have captured images of celestial objects, I have always seen them three-dimensionally in my head. The scientific information makes my inner visions much more accurate, and the 3-D technique I have developed enables me to share those beautiful visions with others.”

Metsavainio first began planning the process of converting photos of nebulae into 3D back in 2008, and it starts with collecting scientific data about his target nebula.

Usually there is a recognizable star cluster that is responsible for ionizing the nebula. We don’t need to know its absolute location since we know its relative location. Stars ionizing the nebula have to be very close to the nebula structure itself. I usually divide up the rest of the stars by their apparent brightness, which can then be used as an indicator of their distances, brighter being closer. If true star distances are available, I use them, but most of the time my rule of thumb is sufficient. By using a scientific estimate of the distance of the Milky Way object, I can locate the correct number of stars in front of it and behind it.

Nebulae glow due to stellar radiation ionizing elements inside the gas clouds, Metsavainio explains, and the shape of each one can be estimated by looking at brightness at various parts of figure out “thickness” there.

“Many other small indicators can be found by carefully studying the image itself,” Metsavainio says. “For example, if there is a dark nebula in the image, it must be located in front of the emission one, otherwise we couldn’t see it at all.”

Using all of these data points, Metsavainio builds a skeleton model of each nebula and then uses his photos to turn each model into “a sculpture on a cosmic scale.”