Photographer Benjamin Von Wong — known for tackling environmental issues in his photographic work — has released his latest project that raises the discussion of plastic pollution in a creative and collaborative way.

In 2016, Von Wong’s photographic work brought awareness to a diverse range of subjects and issues and encouraged others to join in. The most recent project — “Turn Off the Plastic Tap” — further amplifies Von Wong’s dedication to creatively bring attention to a global issue. 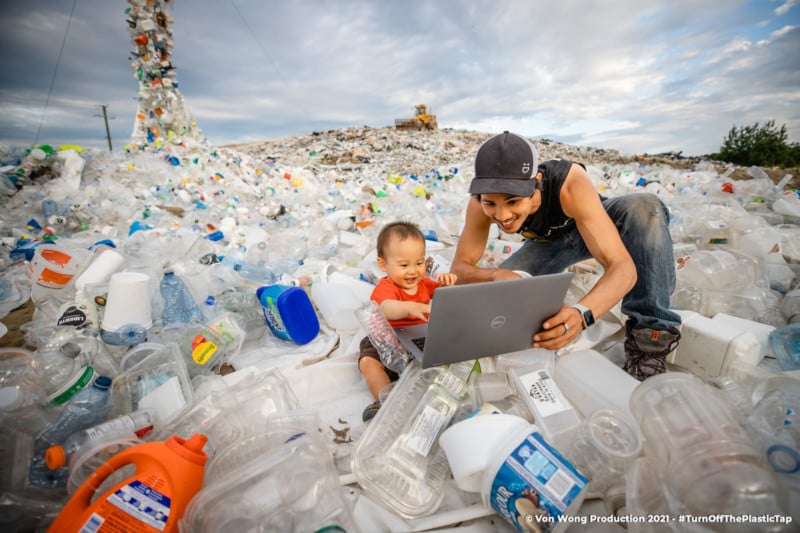 Von Wong, who is “always looking for exciting ways to make the boring problem of plastic pollution more interesting,” was approached by the Embassy of Canada in France and asked if he can build an and art installation to bring awareness to plastic production.

Von Wong excitedly took on the challenge and, with the help of like-minded community members, built a three-story-tall tap that look as though ti is leaking plastic. He tells PetaPixel that volunteers were found through social media and local community organizations like Ocean Wise. 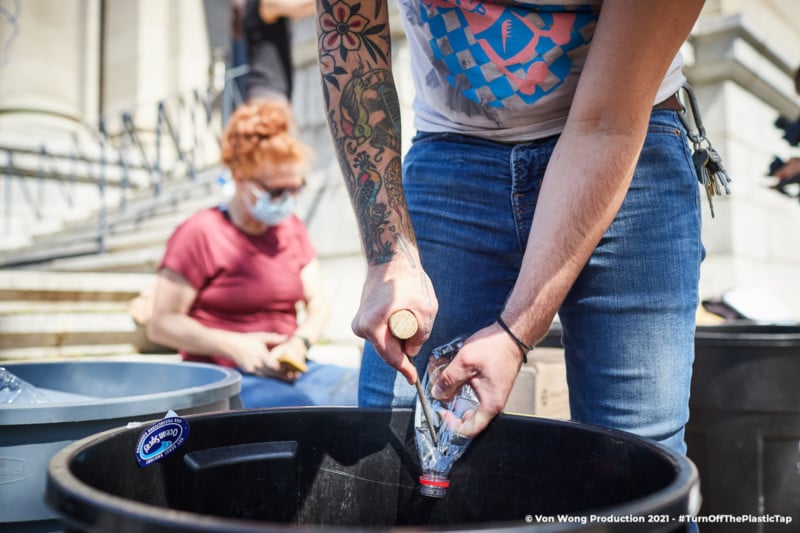 The project, as large as the tap itself, required the volunteer team to create a faucet, which was built from used ventilation ducts from a building that was about to be demolished. It was then cut, painted, and adapted to fit a manual forklift. 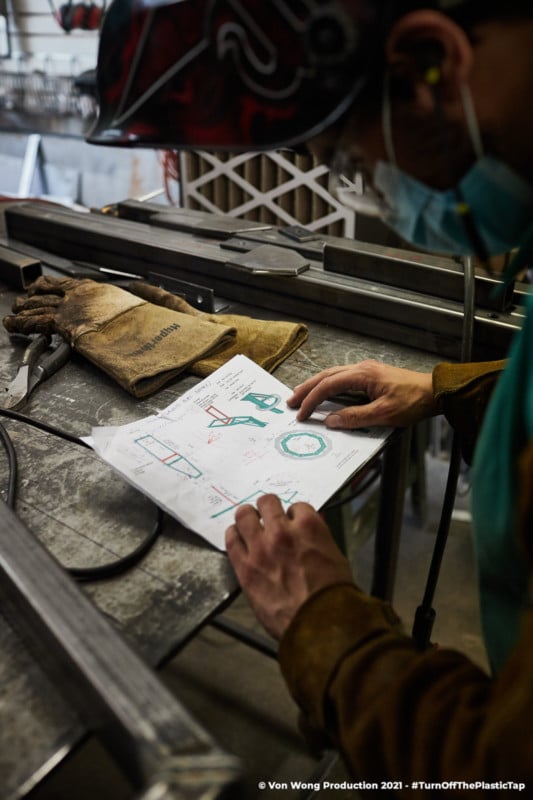 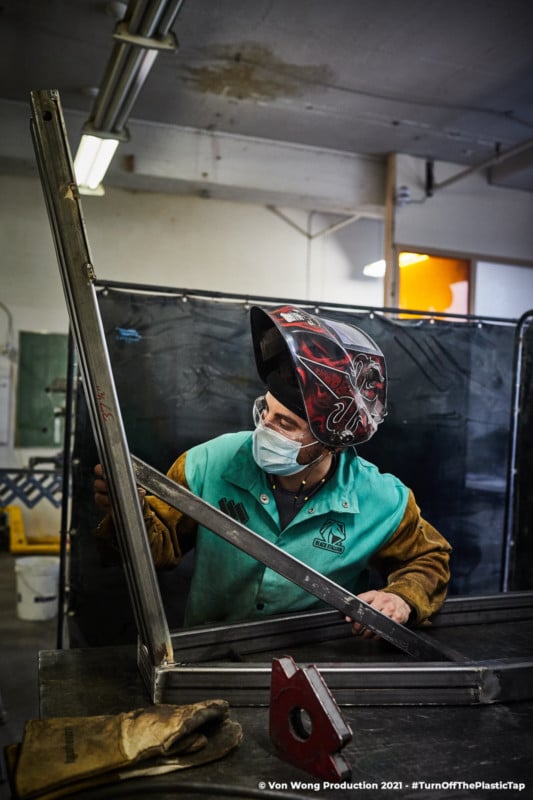 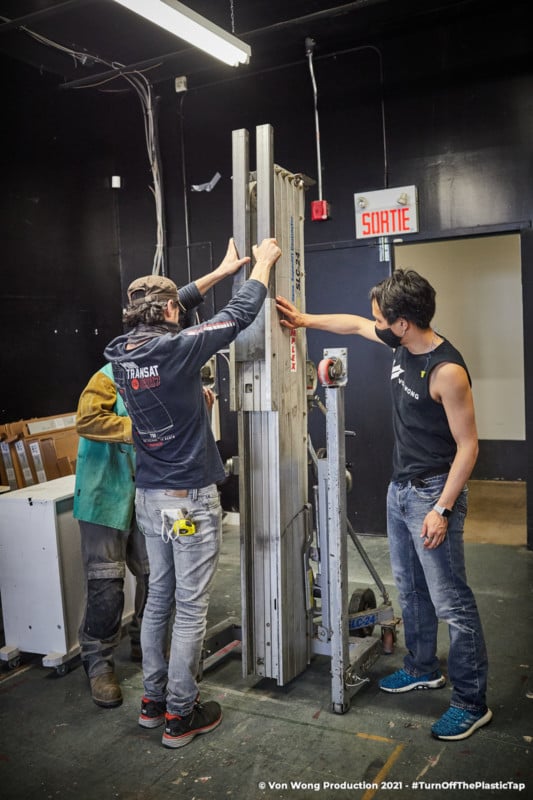 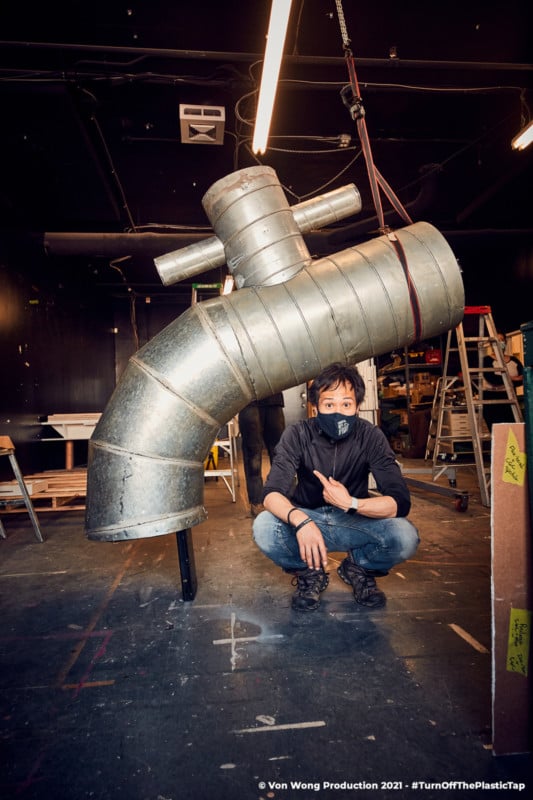 The participants organized and prepared the plastics by sorting them into three categories — transparent, mixed, and black. The plastics were then tightly assembled — using a rope that was made from plastic bottles – to create the water flow coming out of the tap. 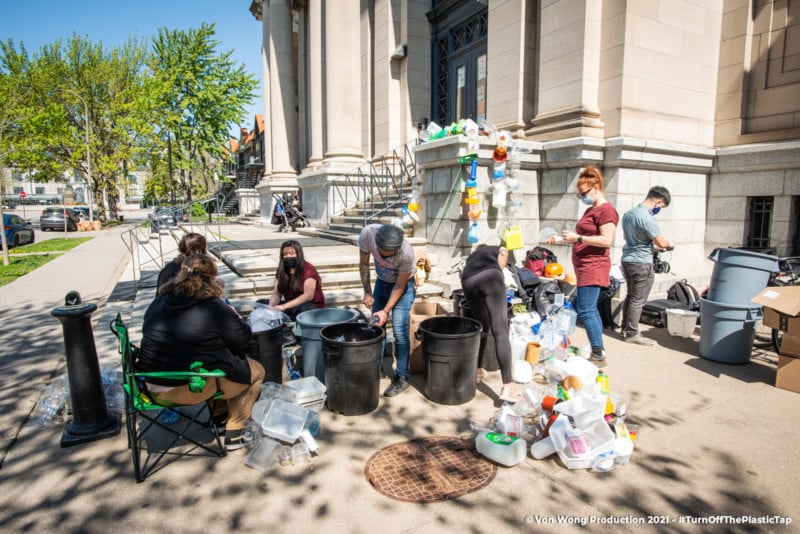 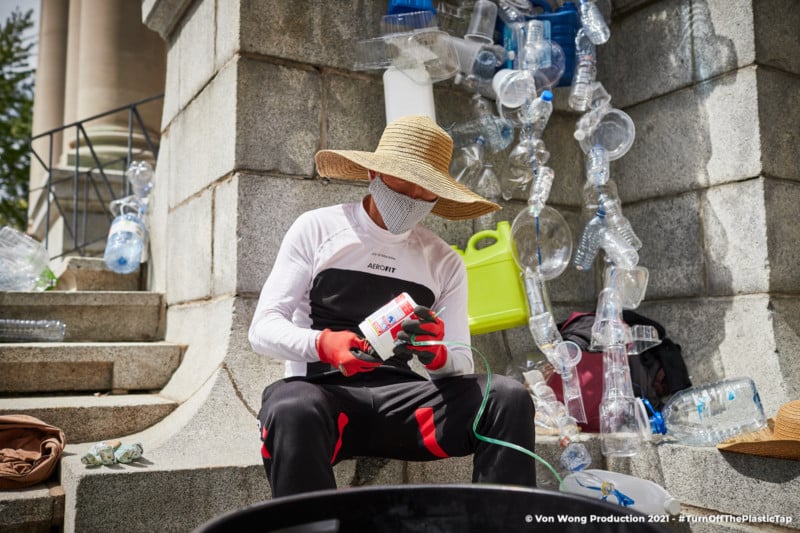 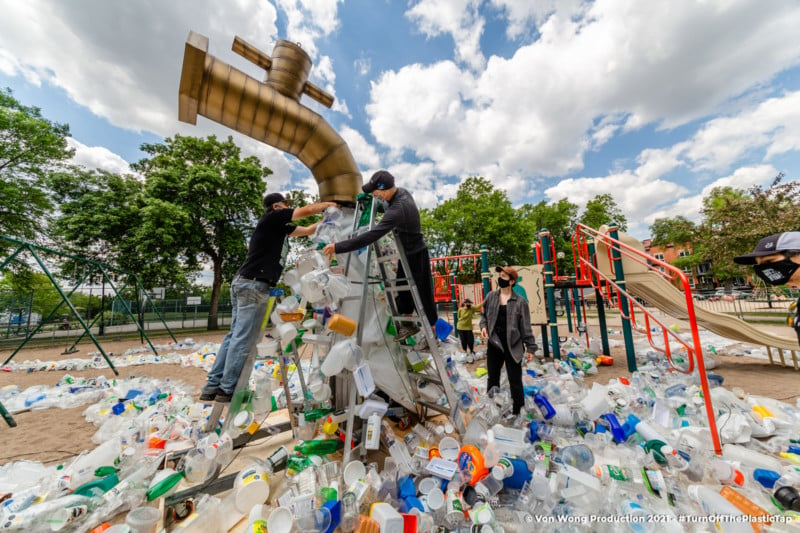 The team photographed the art installation in several locations, such as a children’s playground, container yard, recycling facility, landfill, and beach. Each one required volunteers to work closely together to help create the final shot. 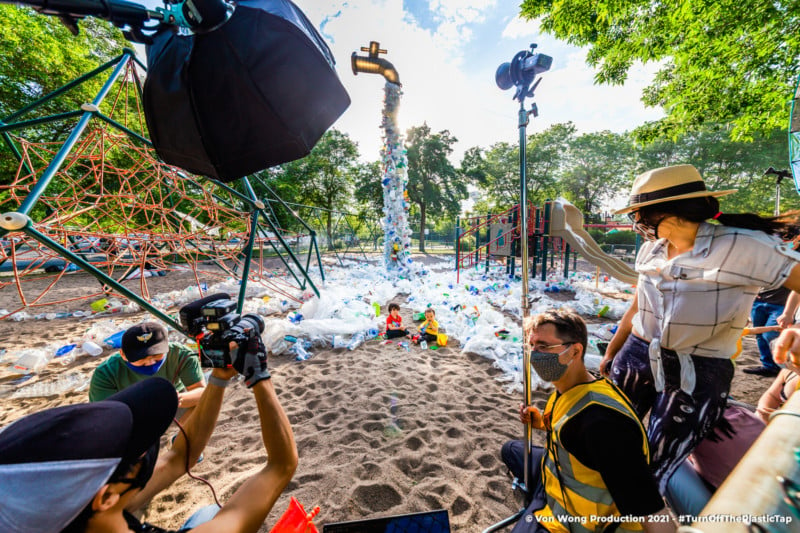 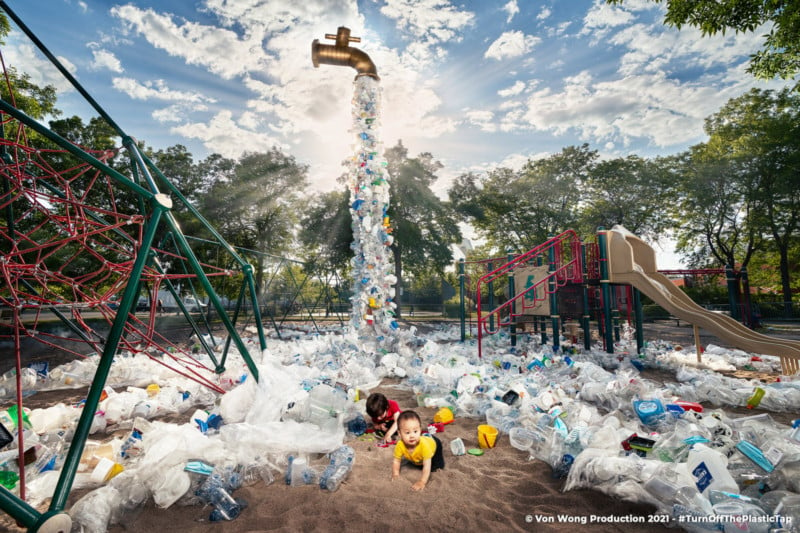 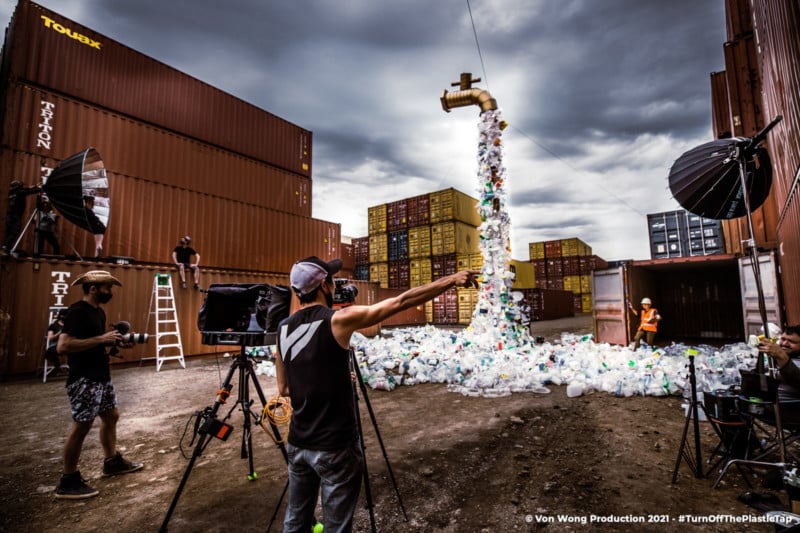 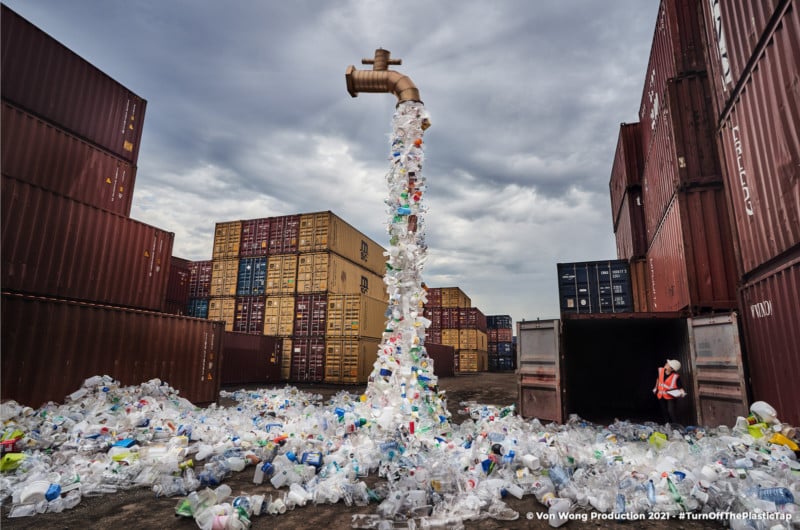 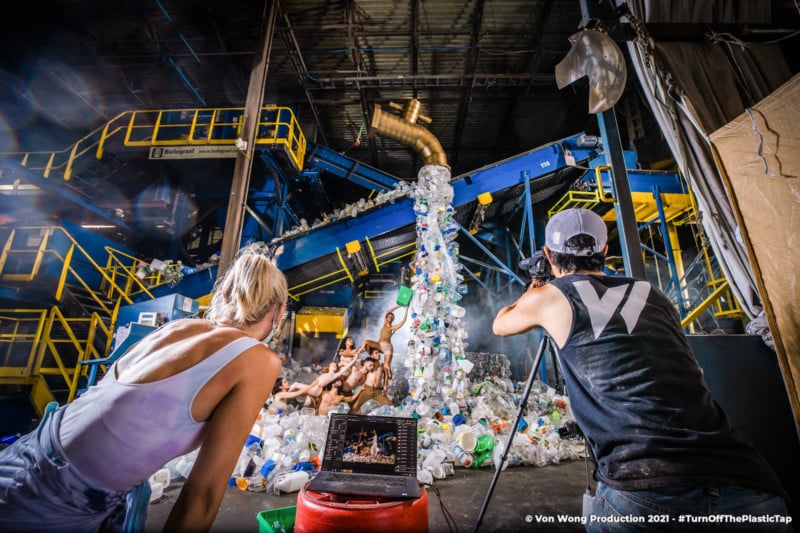 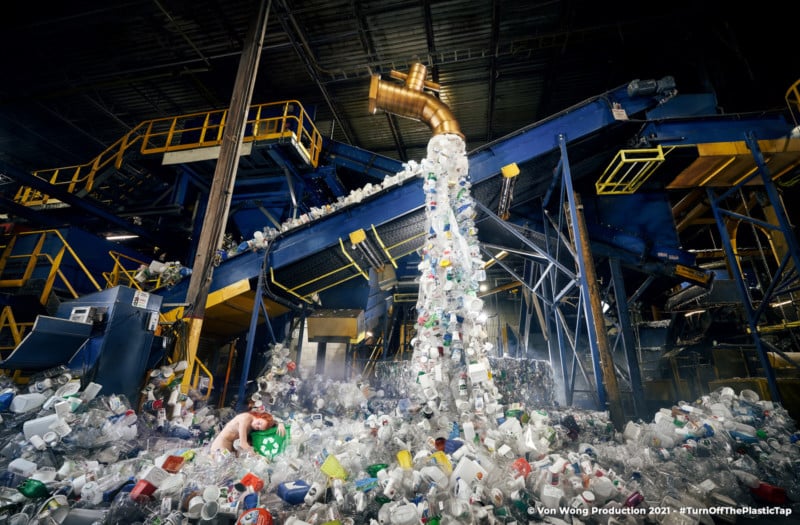 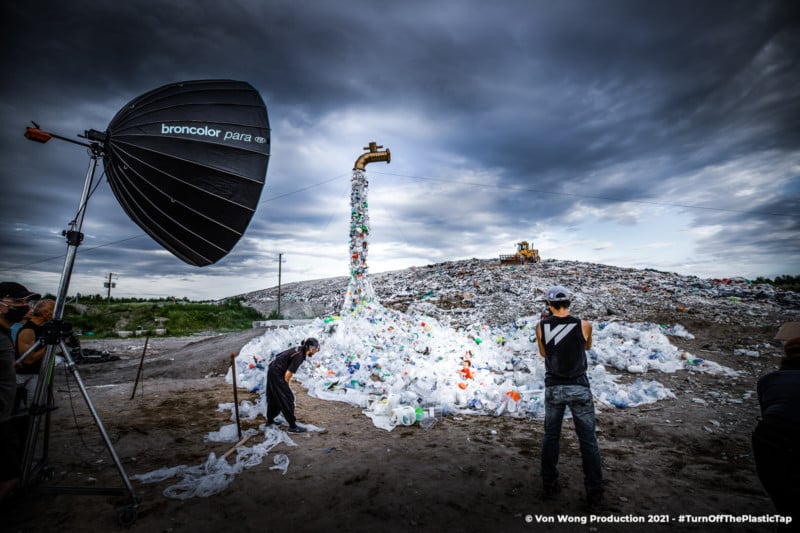 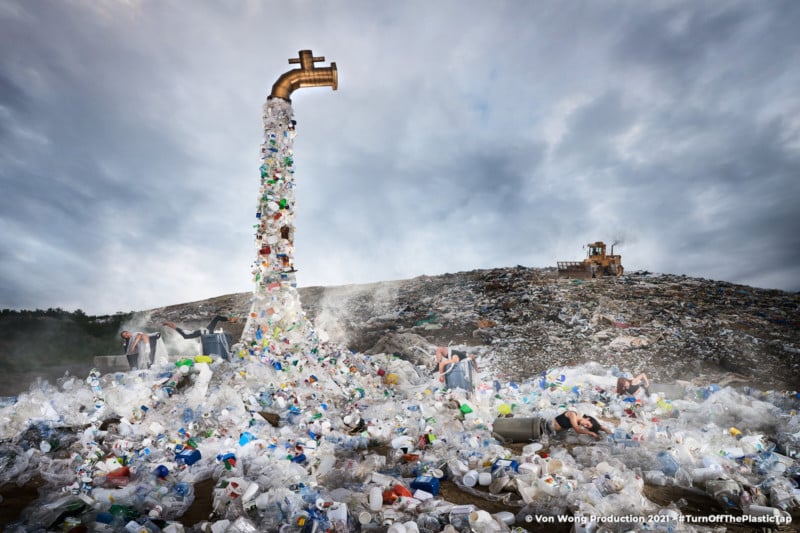 For example, for the beach photo, it took the team five hours to assemble the tap along with two hours spent on capturing the image. 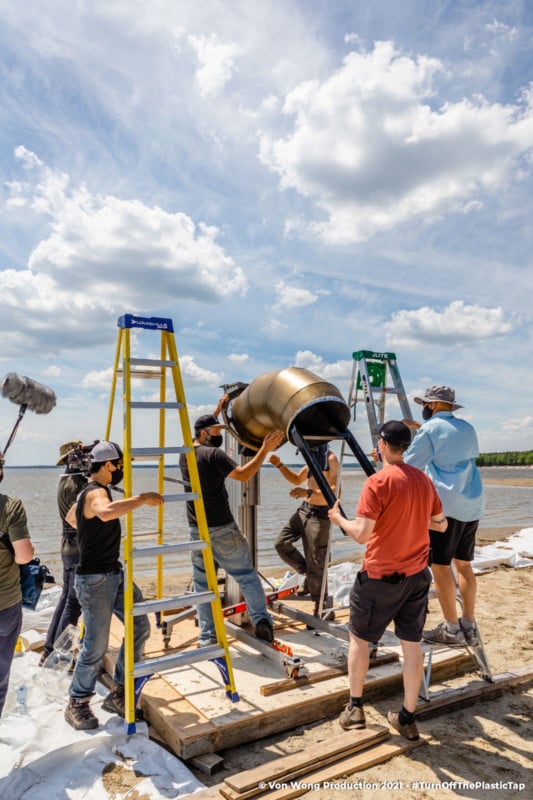 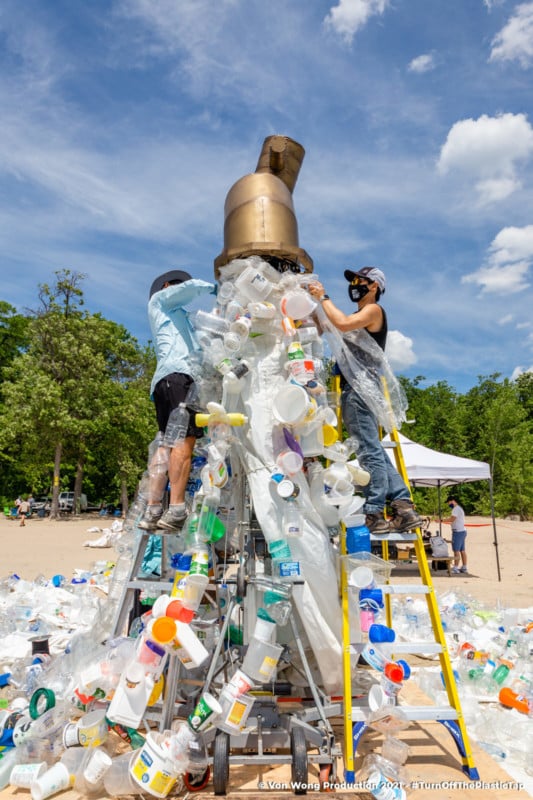 It wasn’t an easy task to light it up so the team used mirrors to direct the light while a simple bee smoker came in handy to diffuse it and add a touch of mystery. 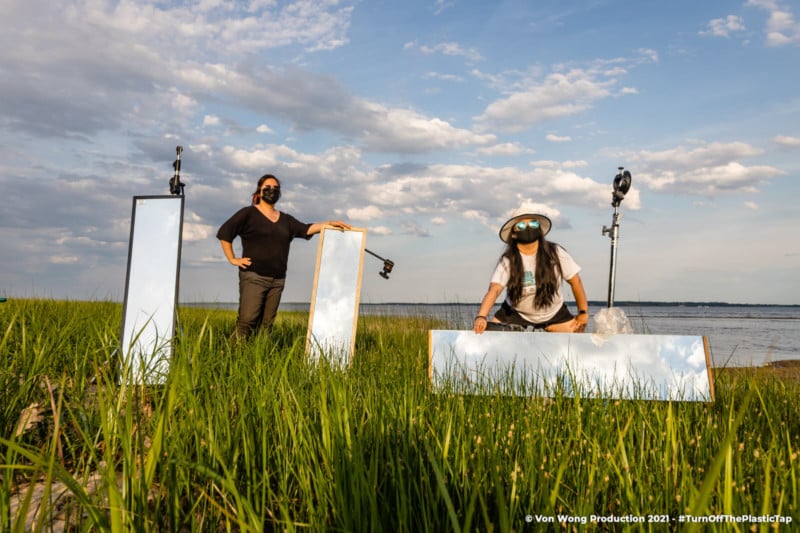 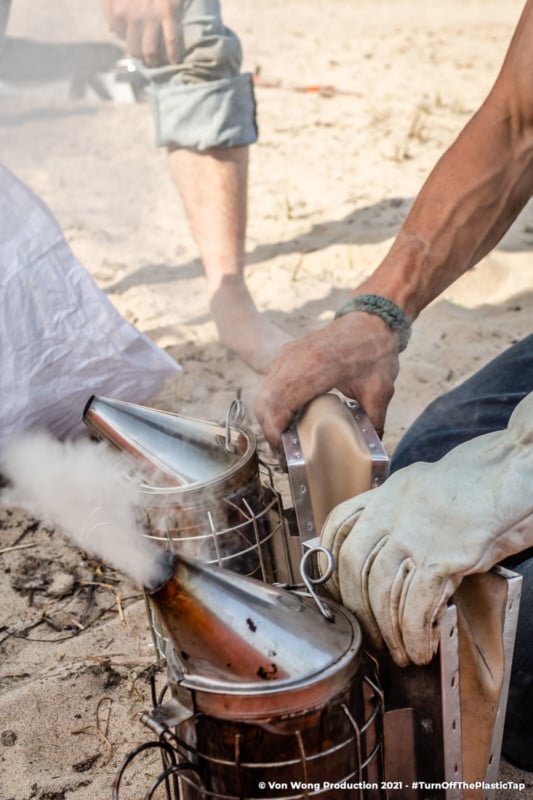 To further light it artificially, Von Wong and his team of volunteers brought whatever lighting they had on hand. Von Wong says that they used everything from speedlights to Godox strobes to top-of-the-line Broncolor Move Outdoor packs. 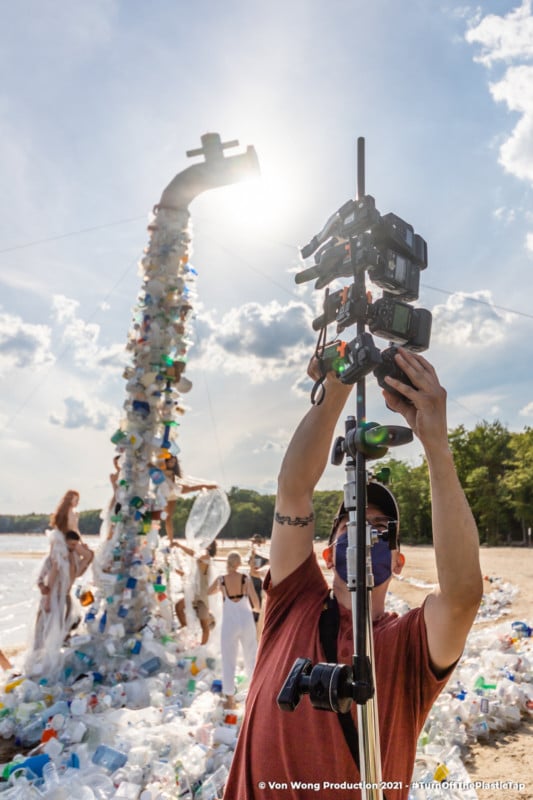 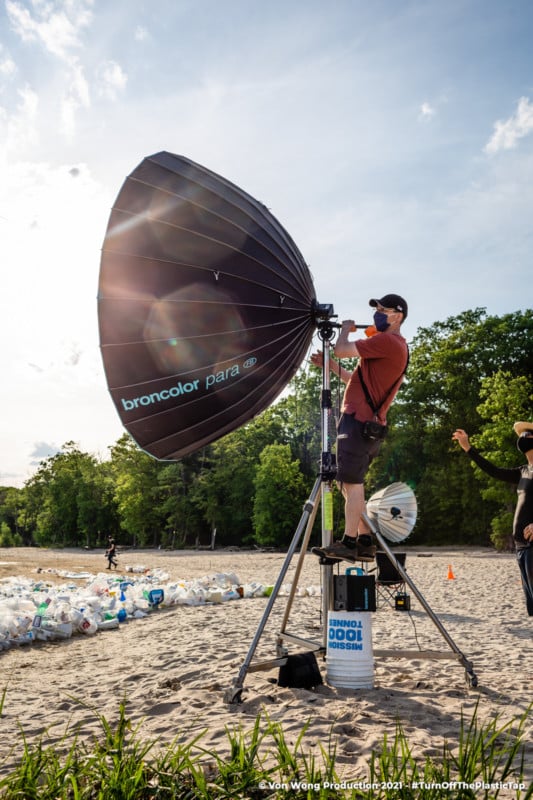 And, once the sun and clouds got into the perfect position, the shot was ready. Von Wong also used the Sunseeker app to predict the position of the sun while scouting the chosen shoot location at a beach in Oka, Canada. 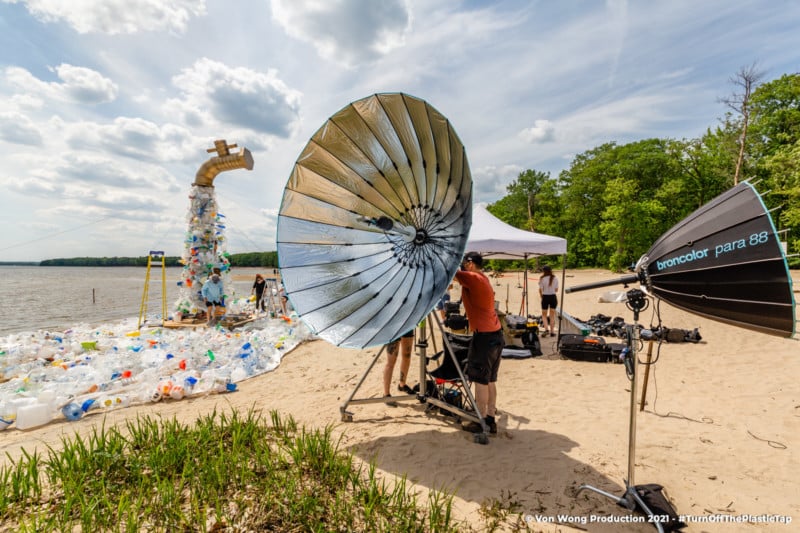 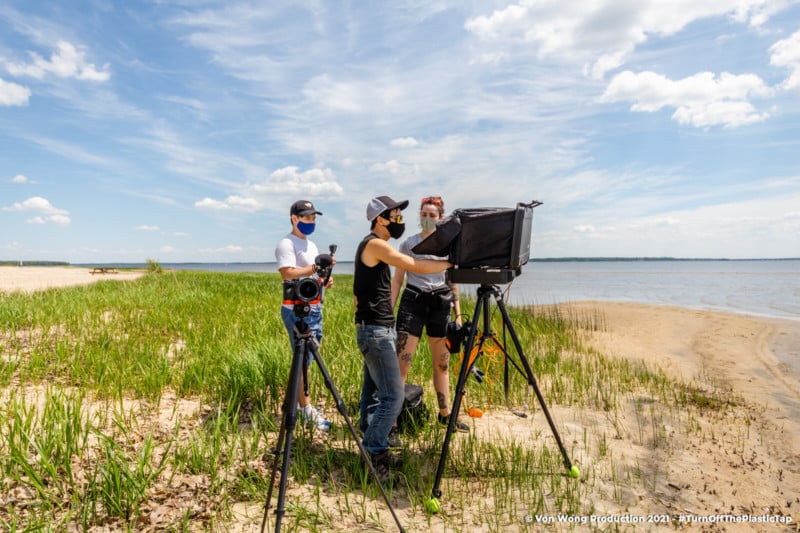 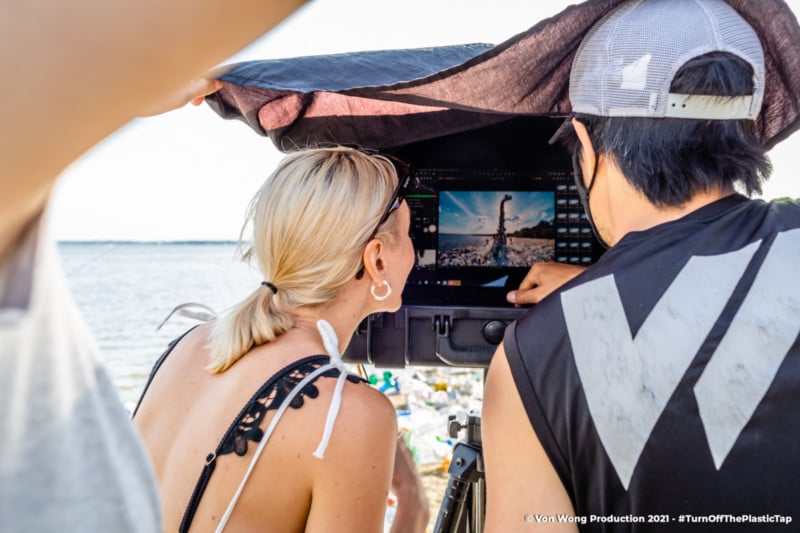 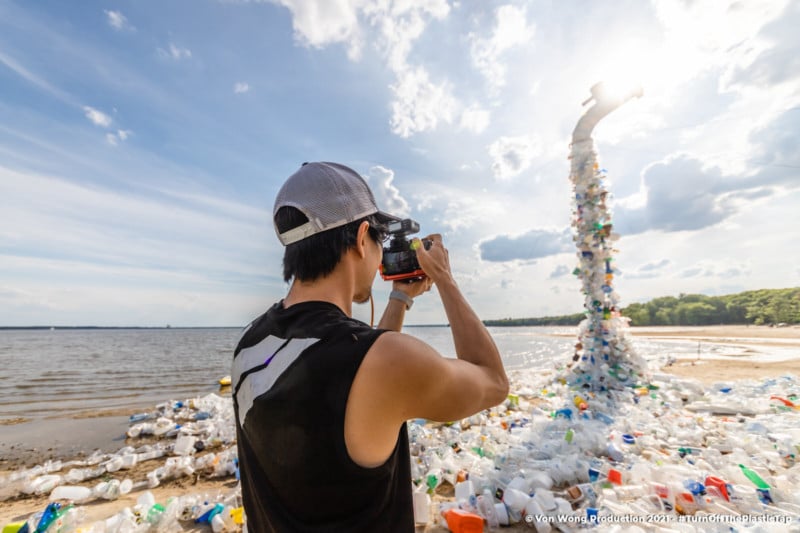 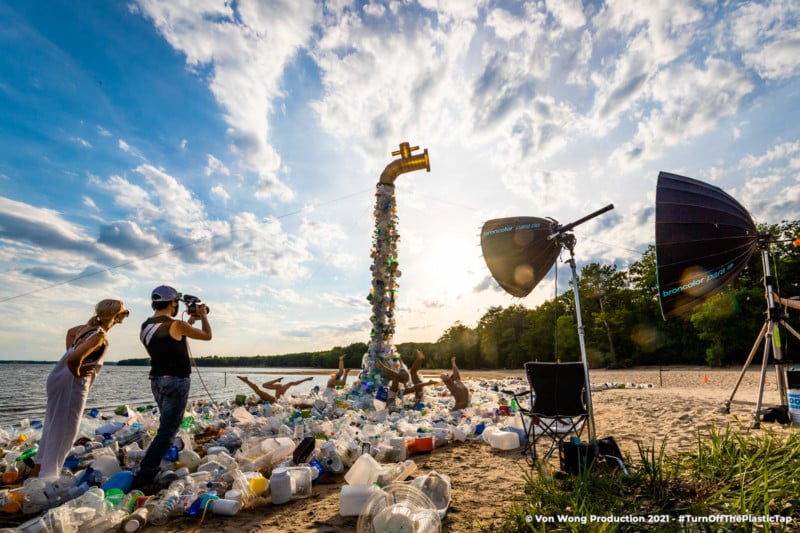 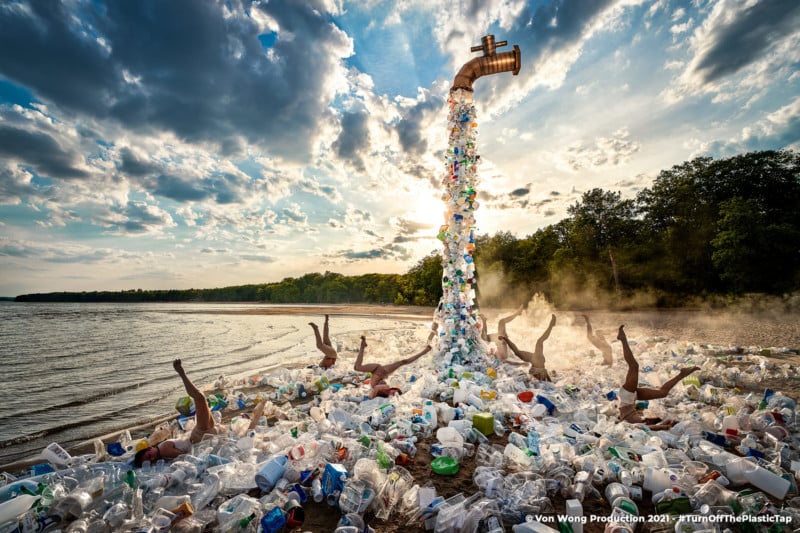 Von Wong explains that the photo-taking stage took the team two weeks and the project was long from finished. They still had to pack up the installation and ship it to France so that it can be displayed in Paris on October 7.

The behind-the-scenes work such as editing, putting together press and marketing materials, building non-profit partnerships, and more takes a lot of work — so for Von Wong, the project is still not done. 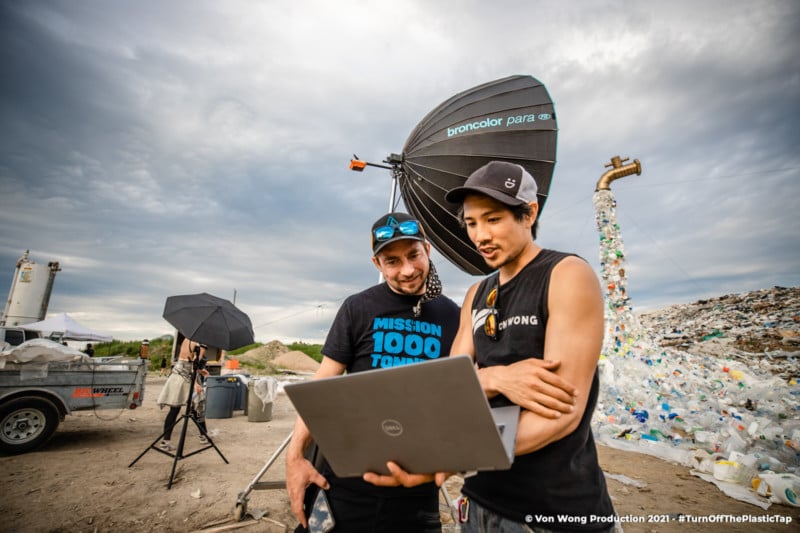 For anyone interested, Von Wong encourages artists and creative talents to participate by creating a remix of the original Giant Plastic Tap between October 4th and November 4th. Those who take part will be automatically entered into a $10,000 prize pool.

Detailed instructions on how to enter can be found here. More of Von Wong’s work can be found on his website and Instagram, with additional information about the Giant Plastic Tap project available on the Turn Off the Plastic Tap website.