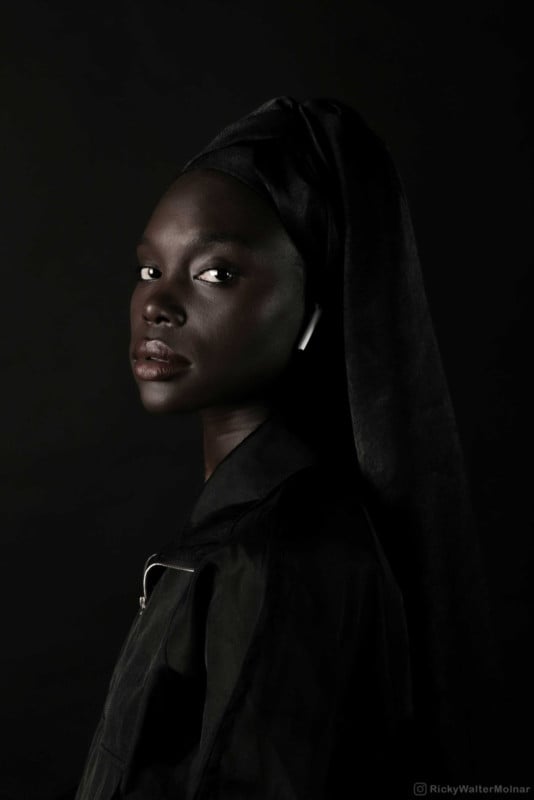 “I first found my way into photography a few years ago when I started taking photos of my cats,” says Molnar, an aspiring freelance photojournalist based in Houston, Texas. “After that, I went to dragging my friends out into the city to practice my portraiture, then I went on to photograph strangers, then to self-publish a book on homelessness in my city, and before I knew it I was working as a photographer in a studio.”

Molnar says he was inspired to shoot his homage to Vermeer after seeing the concept done by Dutch photographer Jenny Boot in a photo titled Black Girl with Pearl.

“I was looking for a passion project to take on and stumbled upon her photo, I immediately knew that I wanted to do a series that I considered modern renaissance,” Molnar says. “The project was short-lived — I ended up photographing four different models with various themes, with Girl with a Pearl Airpod being the last photo in that series.

“I knew I wanted to go big with this photo, so I started by looking for professional models and stylists online and in my city, I ended up finding model Kellida Jokudo and stylist ChiChi L’maour, after that all that was left was to set the date and do that shoot.”

If you’d like to try your own hand at this type of portrait lighting, you’ll just need a couple of softboxes.

“The lighting set-up is very simple,” the photographer says. “I had a small/medium-sized softbox camera left quite close to her face, and a similar soft-box camera right a little bit farther away to give that soft kick of light so she would be completely lost to the background.

“For the most part my entire modern renaissance project was done with a single light and a bounce, but this photograph, in particular, was much darker and needed the little extra push of light.”

Molnar has been turning his attention to chasing international stories on trips abroad, but he but hopes to one day revisit this project and perhaps one day have it “displayed in a gallery somewhere for people to see.”