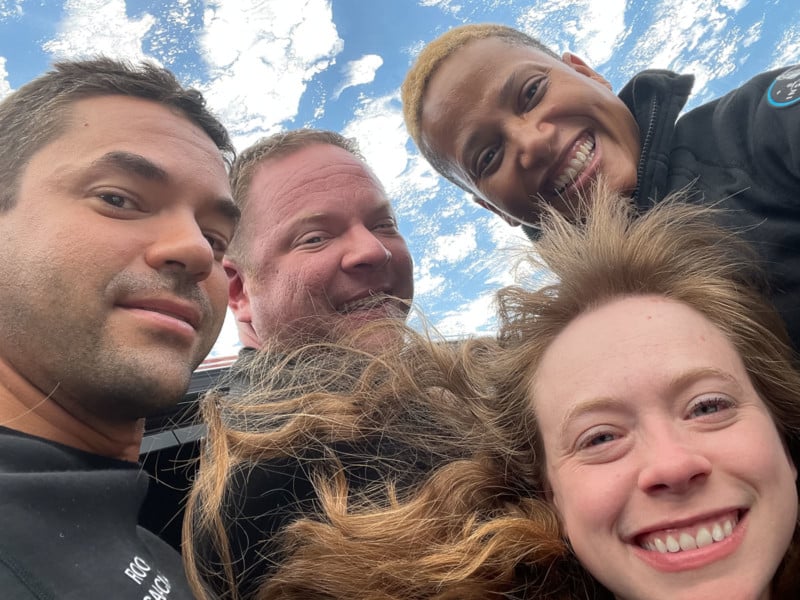 The SpaceX Inspiration4 space mission was the first-ever orbital spaceflight in which the whole crew was composed of private citizens. While zooming around our planet during the three-day journey, the crew snapped this out-of-this-world selfie that used the Earth as the backdrop.


The Inspiration4 space tourism mission launched on September 16th and brought the crew to an orbital altitude of around 364 miles (585km) above the planet. By comparison, the International Space Station (ISS) orbits at around 253 miles (408km), so the Inspiration4 crew had a wider angle of view of the Earth compared to ISS astronauts.

The vantage point and 360-degree cupola were used by the crew throughout the mission to photograph Earth.

Look at our Mission Specialist @ChrisSembroski capturing pictures from orbit through Dragon’s cupola!

We can’t wait to see the crew’s photos and how they will inspire the world to look up to the stars. pic.twitter.com/r7jIFb50rT

Here’s a close-up photo of Sembroski doing his space photography:

The spacecraft’s cupola was protected by a retractable nosecone during launch and re-entry — this nosecone also contained a special camera that shot photos of the spacecraft during the mission.

The Inspiration4 crew zipped around Earth at about 23 times the speed of sound, circling the globe about once every 90 minutes.

Our #Inspiration4 crew took many amazing photos in space during their three-day mission, including this out-of-this-world selfie!

Jared, Hayley, Sian, and Chris are back home on Earth, but our team is still fundraising for @StJude. Join that effort: https://t.co/NBUL2e3f4x pic.twitter.com/gerXjLbVLY

The Inspiration4 mission was also a fundraising campaign for the St. Jude Children’s Research Hospital to expand childhood cancer research. Over $200 million was raised, including a $50 million contribution by SpaceX founder Elon Musk and a $100 million contribution by billionaire crew member Jared Isaacman, by the time the crew splashed down in the Atlantic Ocean on September 18th.

Filled with awe and gratitude. Yesterday we completed two missions: our successful Inspiration4 mission to space AND we surpassed our $200 million fundraising goal for @stjude. Thank you to everyone who supported both missions, I am forever grateful! Can’t stop smiling!!! pic.twitter.com/5BTQMcMAdm

Many more photos and videos from the flight will presumably be published in the coming days.

The actual answer is that we only had so many ground station passes to transmit video. NASA and other government users are going to get priority. I suspect a lot of footage will be released shortly. We had quite a few cameras on board.

“[W]e only had so many ground station passes to transmit video,” Tweets mission commander Jared Isaacman. “NASA and other government users are going to get priority. I suspect a lot of footage will be released shortly. We had quite a few cameras on board.”

Image credits: Header photo by the Inspiration4 crew and licensed under CC BY-NC 2.0