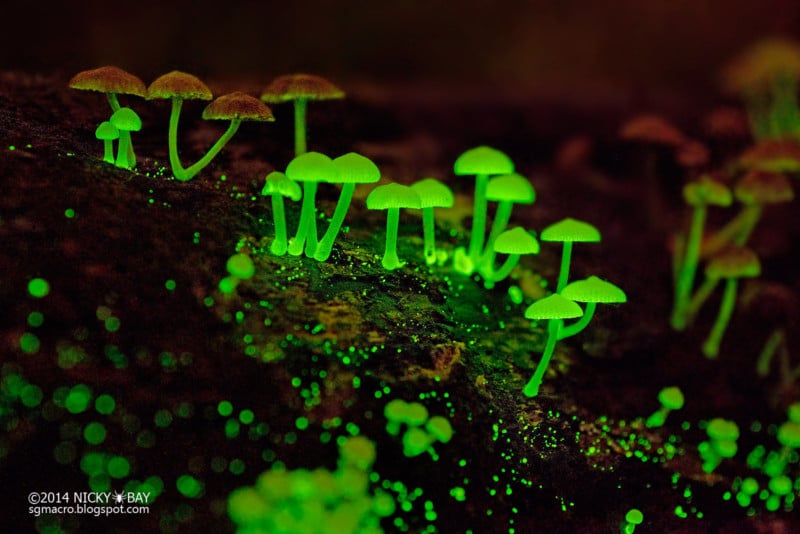 Singapore is home to a number of bioluminescent fungi. Out of over 148,000 known species of fungi across the world, over 70 of them are known to exhibit bioluminescence.


All known luminescent species are white-rot fungi, which means that it breaks down lignin in wood. Lignin is responsible for the support tissues in plants and lends rigidity to wood and bark, which is why trees and logs with white-rot fungi tend to be moist, soft, spongy, or stringy. This wood decay forms a critical component in the forest’s nutrient cycle.

Why Do Mushrooms Glow?

There are limited studies done to determine the reasons for the glow. The most commonly suggested hypothesis is that the light attracts other invertebrates which help to disperse its spores. Experiments had been done with plastic mushrooms with and without lights, where the one with simulated lights attracted a lot more insects. However, using plastic mushrooms left out many other factors so it was still inconclusive.

I’ve had a number of readers asking which UV light I used for the photos in this post. Please note that the bioluminescence is naturally occurring and does not require any UV exposure. We can see the glow with our naked eyes!

Which Bioluminescent Fungi Can We Find in Singapore?

The 2 most commonly sighted species of bioluminescent fungi are Mycena illuminans and Filoboletus manipularis. The flowering bodies of both species are umbrella-shaped and relatively small at 1 to 2cm in diameter. Mycena illuminans is gilled and depressed in the center, while Filoboletus manipularis is pitted and has a slightly pointed center. I’ve encountered other species before but had been unable to determine their IDs.

Bioluminescent fungi are seasonal and tend to flower during the rainy season. A nice big cluster with bright bioluminescence is considered rare as most would only last for a day or two before losing its glow and wilting. Because of that, we rely heavily on sightings among friends and photos from hikers in Facebook groups.

How To Photograph Bioluminescent Mushrooms

For those new to photographing these amazing fungi, here are some basic tips.

Tripod. A small tripod is essential. Most of these fungi are found on fallen logs at a low height, which means that a large tripod would restrict your angle for composition.

Cable Shutter Release. Use a cable to trigger the shutter release, and use the mirror-up mode for DSLRs. This reduces any camera shake when the shutter button is pressed.

Lens. For large clusters, bring a wide-angle lens. Sometimes there may not be enough space to position your camera if you used a long lens.

Camera. A full frame camera will be very helpful for clearer photos at high ISO. Unfortunately, this rules out many of the entry-level cameras.

Settings. I typically use f/8, ISO 1600, 30s. It will vary somewhat, depending on the brightness of the glow and focal length of the lens used. I’d try to avoid exposures over 30 seconds as that would almost always generate hot pixels.

Small Group. It would be much easier to photograph this with a friend or two, but not in a big group. It is difficult to ask everyone to remain in the darkness for extended periods while one or two are taking photos.

Stray Light. Check for any equipment that emits light as any light could affect the resulting exposure. e.g. flash or camera LEDs, mobile phone screens, etc. This is another reason for going in smaller groups.

Throughout the years, I’ve been on the hunt to photograph the largest and most beautiful clusters of bioluminescent mushrooms, envisioning a scene of Pandora from the movie Avatar. Here’s a quick summary of my sightings so far.

I hope you’ve enjoyed this series!