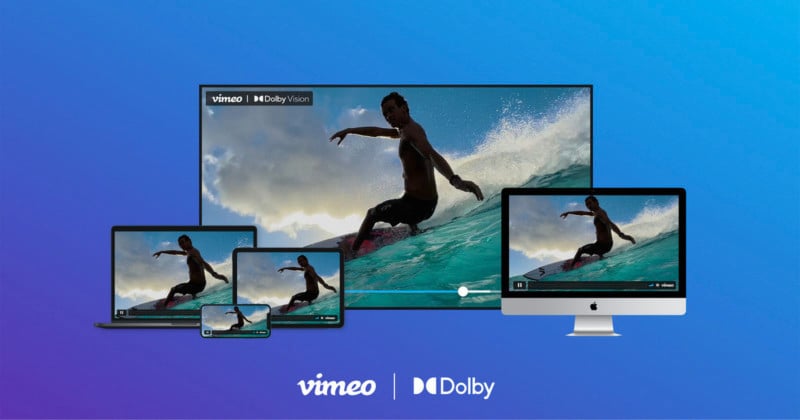 Vimeo has announced that it is the first to bring the ability to host, share, and playback videos shot in Dolby Vision and uploaded through Apple devices.

The launch comes as Dolby and Vimeo have partnered to allow Apple device users to upload and share content that has been recorded in Dolby Vision onto Vimeo without having to worry about how the HDR format translates and instead can know that anything uploaded to Vimeo will look the same as it does on their devices.

Originally launched in 2014, Dolby Vision is mainly seen as an HDR format that is heavily used in both commercial cinema and home theater applications. It is regarded as the highest quality video experience available today as it offers rich and vivid picture quality filled with incredible brightness, contrast, color, and detail. However, until now, playback was limited to major media platforms (like Netflix).

Dolby Vision support has become nearly standard on all mid to high-level television sets from various manufacturers. While most can consider Dolby Vision to be an HDR standard, it is actually a set of technologies that cover content creation, distribution, and playback. Dolby Vision content contains dynamic metadata that is used to adjust the brightness, color, and sharpness of each frame in a video to match the display color volume.

But while Dolby was the first to bring an HDR format, the subsequent years would find the landscape muddied and convoluted by various other standards. At the time of publication, there are five major competing formats, support for which is broken up across different streaming platforms and television manufacturers: HDR10, HDR10+, Hybrid Log-Gamma (HLG), Dolby Vision, and Advanced HDR by Technicolor. All five versions require specific support from streaming services and screens in order to work properly.

While HDR10 is considered a “standard” and supported widely, any content that is shot, edited, and delivered in Dolby Vision won’t look quite the same if it has to be translated to HDR10. Uploading videos that have been shot in Dolby Vision to a platform like YouTube, for example, can result in badly rendered color and exposure.

When Apple announced that it would be supporting Dolby Vision capture on the iPhone 12 last year, the Silicon Valley giant’s influence seemed as though it could clean up the messy HDR landscape.

With Vimeo’s announcement combined with the number of new televisions that are signed on to support the format, that might actually be happening. What may have been frustrating to Apple iPhone 12 video shooters in the past year is that even though they were able to shoot in Dolby Vision, playing back that content was not as easy: users have not been able to upload and share those videos online in their full quality.

Vimeo now makes it possible for anyone who shoots Dolby Vision content on their iPhone to share and playback that content across the web so videos can be viewed in the exact picture quality intended by the creator. Uploading this video content is integrated directly into the iOS photos app once a user installs the Vimeo app, and anyone can sign up for a basic Vimeo account for free.