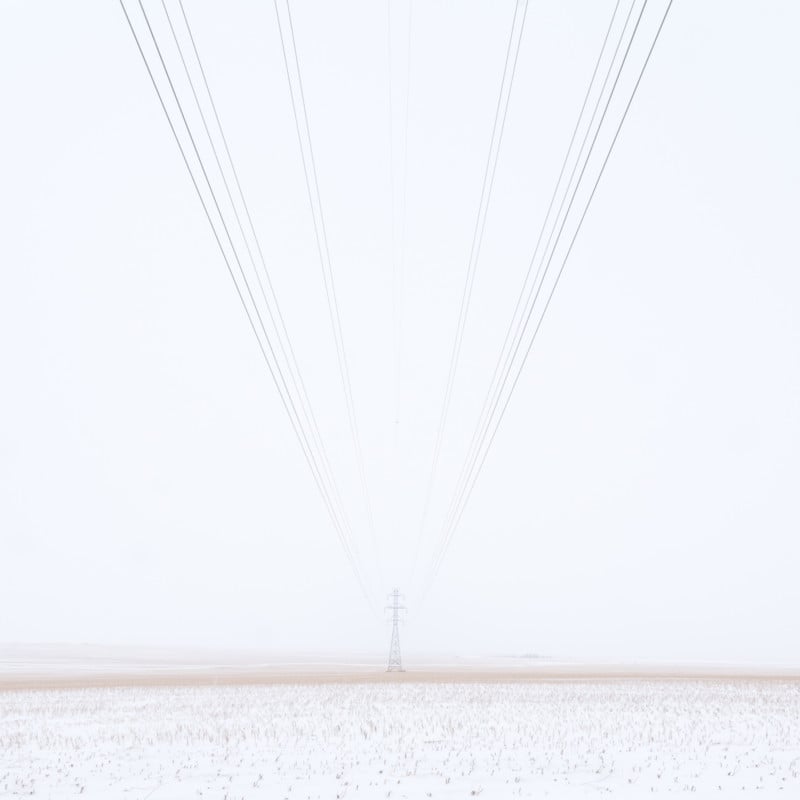 The image of these power lines was taken in Alberta, Canada in late December 2017. I have been traveling to the Canadian Prairies to photograph since 2013 and have been focusing more and more on minimalist winter scenes since my first winter trip there in 2015.

I now go almost exclusively in the winter and have built up quite a nice series of winter minimalist Prairie images, of which this is a favorite. The Prairies are a wonderful place for minimalist photography because, whether you love it or hate it, it’s a place of flat land and wide-open skies. Think of that old Prairie joke: the land is so flat you can watch your dog run away for two days.

I started this trip in Alberta, spending a couple of days shooting with my friend Len Langevin (whom I’d met through Flickr) before heading east into Saskatchewan. On this day, we started out in Red Deer and drove back roads south as far as Mossleigh, Herronton, and Brant (250 kilometers south). The distances on the Prairies are huge and it’s not uncommon to travel 500 km or more in a day of shooting. At the three places I named there were grain elevators I wanted to photograph, but they also simply served as places to aim for on that day. 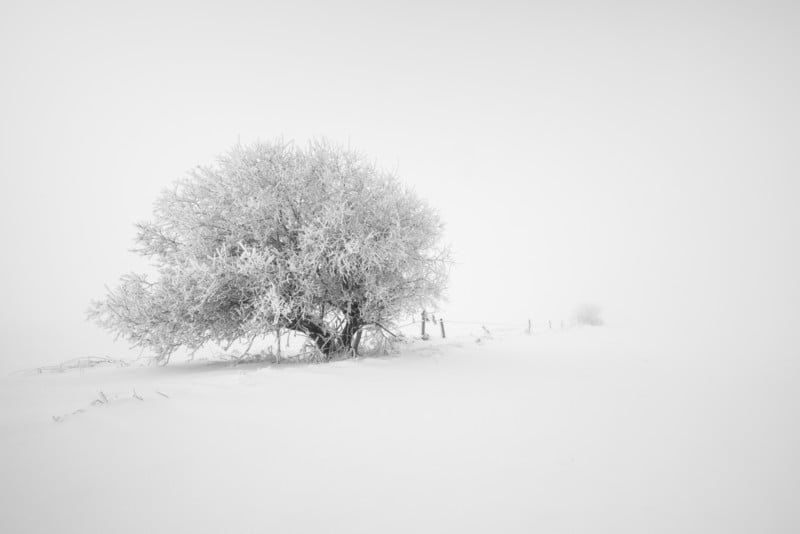 My main goal was to travel backroads to find minimalist scenes to photograph. And we did — we shot shelterbelts, grain silos, and farm equipment before stopping for lunch when the skies cleared and the light turned harsh. In the afternoon, a brief storm blew up, slightly obscuring the horizon and it was at that point we saw these power lines crossing the road. I excitedly asked Len to stop and we climbed to the top of the embankment on our side of the road to try and get some separation between the nearest pylon and the road.

Although it was a better vantage point than shooting from road level, after climbing the embankment, I realized the shot was actually in the other direction. On that side, the pylon was further away – really emphasizing the immensity of the space in the Prairies – there was no road, and the snow squall was beautifully softening the distant trees and stubble in the field. I was shooting with my favorite lens – the Nikon 14-24mm 2.8 – and shot this at 14mm to emphasize the wide-open space I love so much. I only took a few shots. There was really only one composition here and all that was necessary was to center myself and make sure I was square on to the scene. Then we were on our way, continuing our search for more minimalist shots. 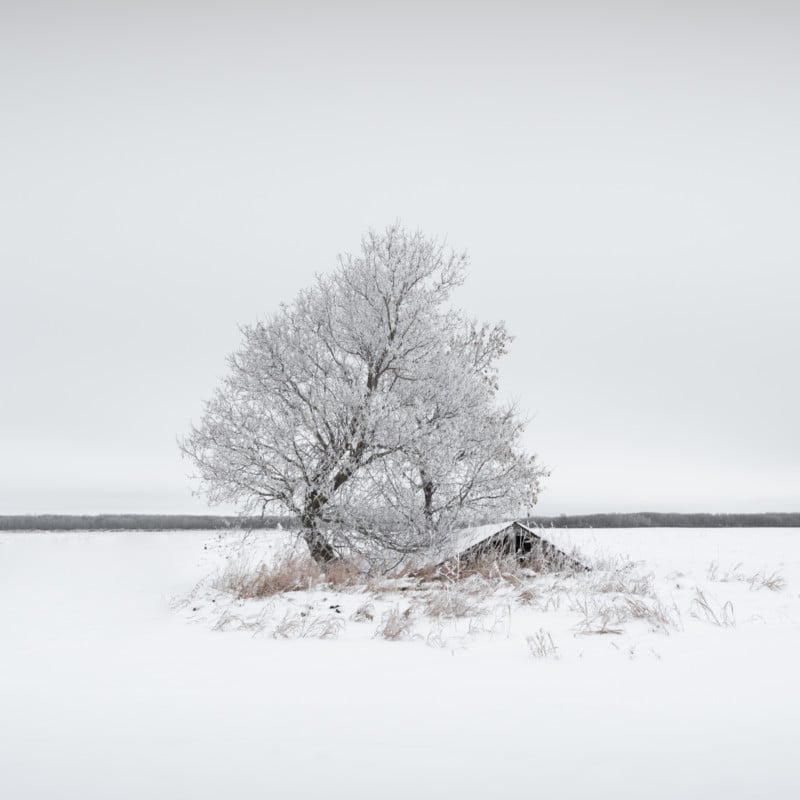 In terms of processing, there was hardly anything to do with the image aside from cropping it into a square. I tried it in black and white, but I’ve come to really love the neutrals of the Prairies in winter – in this case, the stubble from the harvested crop, so I left it in color. I upped the exposure a bit, the whites as well, and reduced the vibrance. All of that was done in Lightroom. The image, to my mind, didn’t need any more work.

What I love about photographing on the Prairies is the lucky accident of coming across scenes like this. While the targets of each day are those that can be easily scouted online, such as grain elevators, it’s often the random finds along the way that produce the best images.

About the author: Sandra Herber is an avid, amateur photographer.  She is a librarian in Toronto, Canada but she spends all her free time (and disposable income) photographing in Canada and around the world.  Her subjects range from old wooden grain elevators on the Canadian Prairies to Mayan ruins in Mexico to icebergs in Antarctica. More and more, though, she is drawn to photographing minimalist images in winter. She has a special love for the Prairie provinces of Canada and their wide-open spaces.