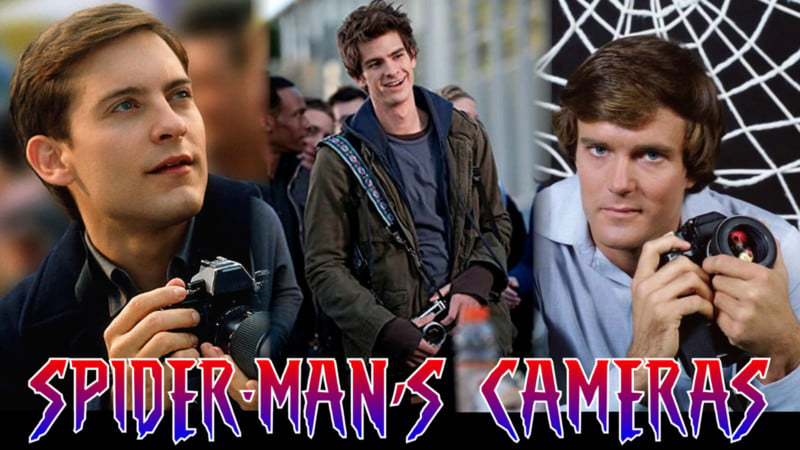 I’m sure photographers out there are one of two minds. One is that Peter Parker being both a photographer and a superhero is amazing and that we wish we could get those crazy angles. The second is that by taking pictures of himself for money, he is a total scam artist that raised the bar on pictures of Spider-Man no one could hope to accomplish.


Spider-Man is not on trial today, though. We just want to know what camera gear he used.

In this article, we will explore this question for three incarnations of Peter Parker. Sadly, so far we have only seen Tom Holland’s Peter Parker taking video with a smartphone, so he won’t be included on this list. We also won’t be looking at anything from the comics or cartoons, as they are generally made up. Like his belt camera or ambiguous rangefinders.

I promise you though that these real-life cameras are nothing short of spectacular. 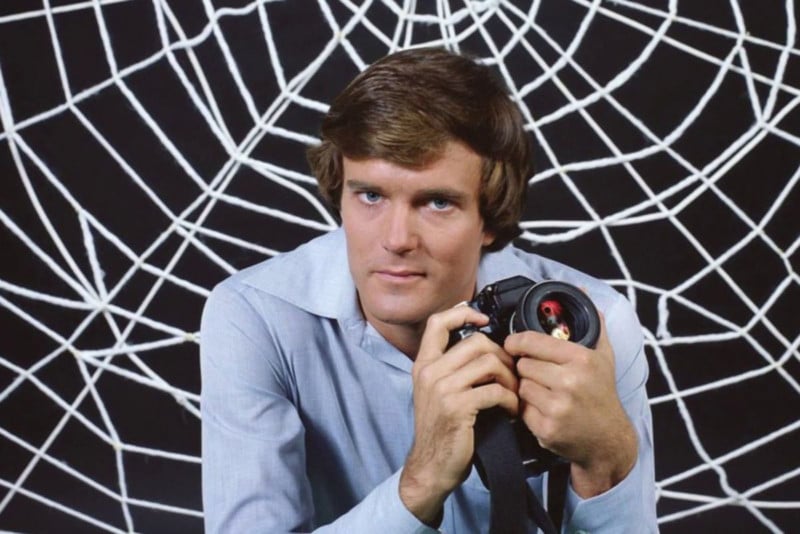 The TV series The Amazing Spider-Man was first aired in 1977 as a pilot film, starring Nicholas Hammond as Peter Parker. In this incarnation, Peter doesn’t get bit by the radioactive spider until he’s in college, and there doesn’t even appear to be an Uncle Ben.

During my research, I watched the pilot and I was both entertained and amused.

In an early scene, he’s talking to J. Jonah Jamison about some photos he’s trying to sell for the Daily Bugle, and he gets rejected. Jamison mentions a recent sighting of Spider-Man stopping a thief, which was just Parker on a wall testing his abilities and freaking out a purse snatcher. This prompts Parker to lie, saying he already has a photo of Spider-Man, and he quickly throws together a costume, sets his tripod and self-timer up, and takes photos of himself clinging to the wall. 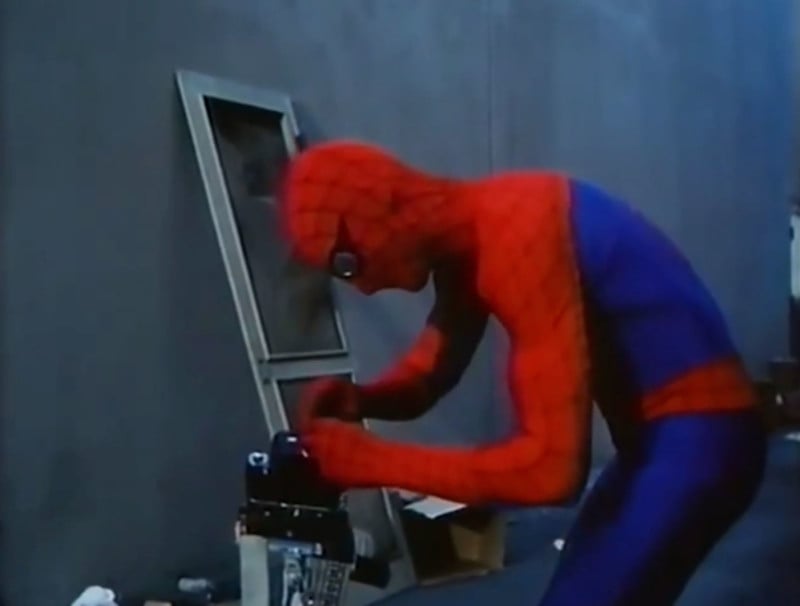 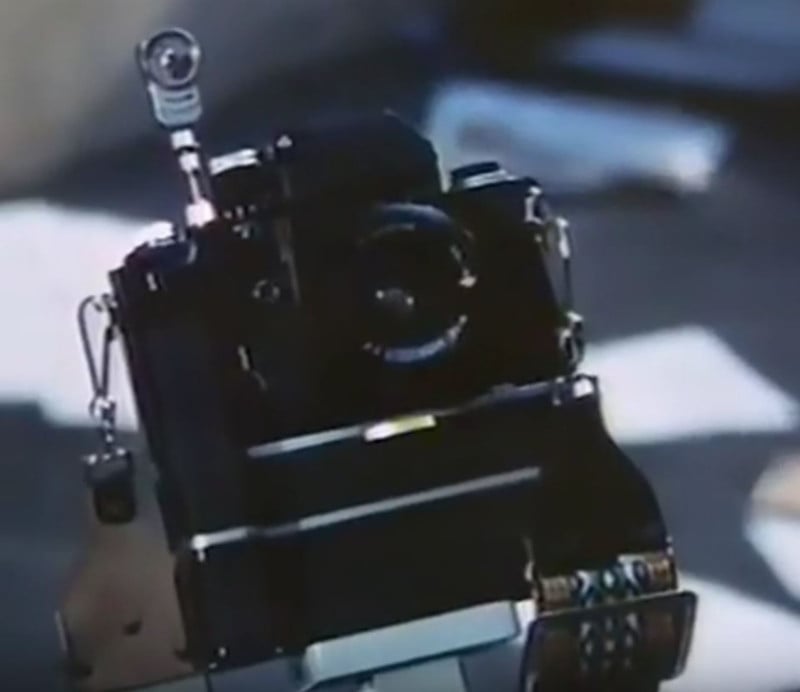 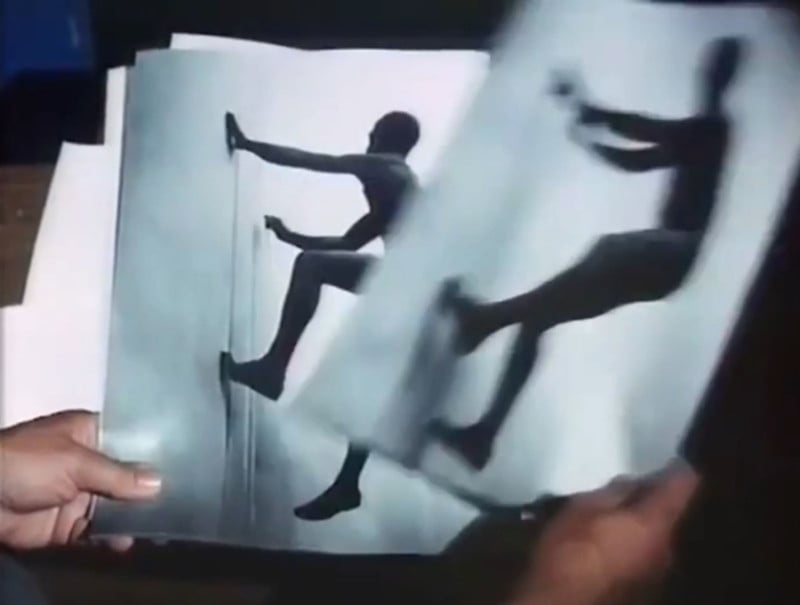 The camera that Parker uses is a Nikon F2. Specifically, it’s the all-black version with a coupled metered prism, self-timer, and motor drive. The F2 has its own self-timer, but I imagine they used an accessory because it looked better for the scene.

We can also see that they used an F2 in the promo materials. 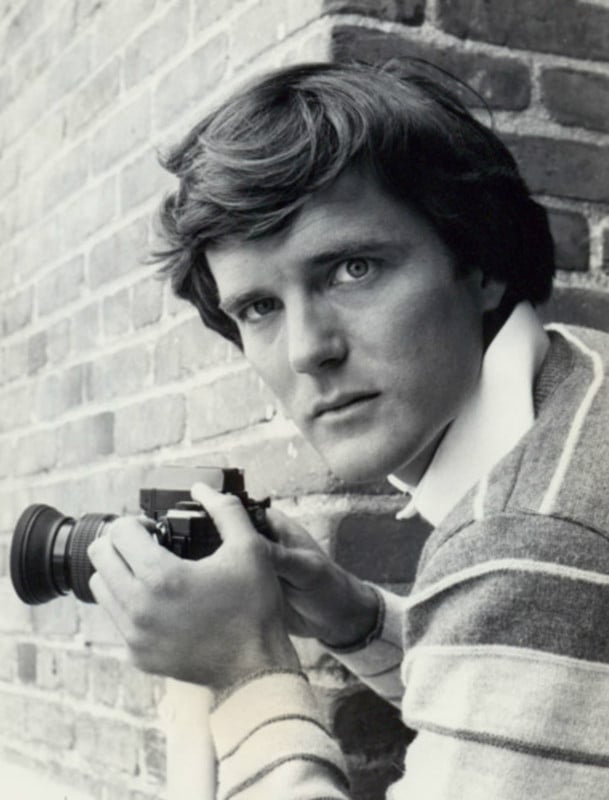 The Nikon F2 was released in 1971, so it was about a six-year-old camera at this point. Assuming Parker bought his a year before this, he would have paid about $400 with the prism and a 50mm lens, as seen here in this Cambridge Camera Exchange ad in Modern Photography, released in February 1976. That’s about $1,900 in 2021 money.

When the F2 was released in 1971, Popular Photography did an extensive review in their December issue, addressing many of the rumors, most of which turned out to be false. 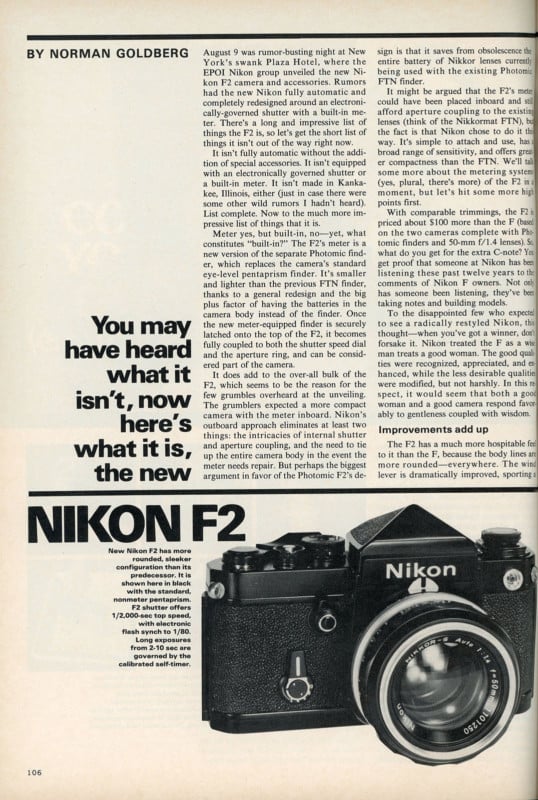 “It isn’t fully automatic without the addition of special accessories,” wrote Norman Goldberg. “It isn’t equipped with an electronically governed shutter or built-in meter. It isn’t made in Kankakee, Illinois, either.”

The F2 would be metered but requires a separate photomic finder. Much of the review goes over the upgrades from the original Nikon F.
Goldberg explains that for an extra hundred dollars more than the original you get proof that Nikon has been listening to comments of the original Nikon F owners for the previous twelve years.

“Nikon treated the Nikon F as a wise man treats a woman.”

“The good qualities were recognized, appreciated, and enhanced, while the less desirable qualities were modified, but not harshly. In this respect, it would seem that both a good woman and a good camera respond favorably to gentleness coupled with wisdom.”

Here is an ad from 1977 that is impressive in itself. From my research on other cameras, usually they drop advertising after about two years even if the model lives on, but not the F2 though. With a two-page ad, Nikon lets you know that the F2 has “Unquestionably, the most accurate viewfinder in 35mm photography.” 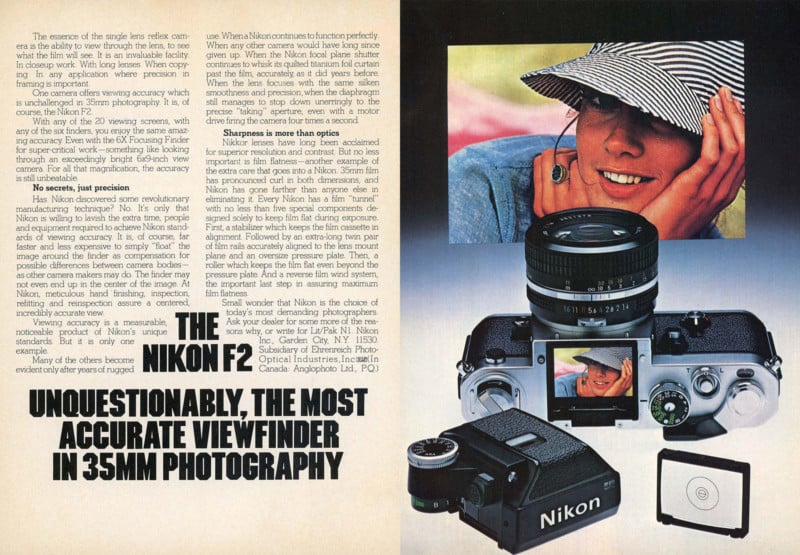 The 2002 Spider-Man starring Toby Maguire is the Spider-Man I love the most. When this movie was released I was just 21 years old, still young enough to make a huge impression on me and give me a burst of nostalgia whenever I go back and watch it.

This Peter Parker is still in high school, and during a field trip with his class, he asks Mary Jane if he can take her photo and this is where we get a solid look at Parker’s camera. Like in most movies, the brand is taped up or Sharpied, but here, the model type is not. We can clearly see an F-1 and right away we can deduce this is the Canon F-1. 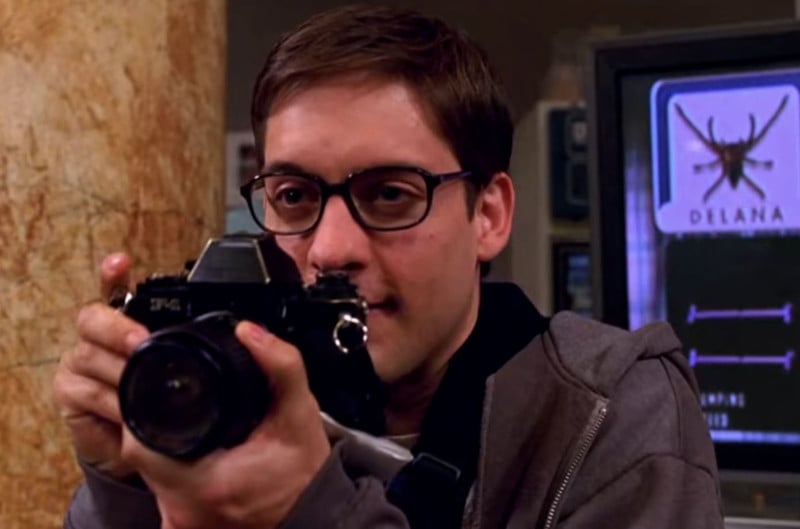 There are two versions of this camera though. The original F-1, released in 1971, and the new version, released in 1981. There are many ways to tell them apart, most of them subtle. The most obvious though, is that the New F-1 has a hotshoe.

While I don’t have records for what a new F-1 would cost in 2002 I do have one for 1998 from an ad in Popular Photography, and it’s reasonable to assume the price wouldn’t have changed much in three years. If Peter bought it from Smile Photo and Video in New York, it would have set him back $1,600, or $2,680 in 2021 money. That’s a hefty price for a high school student from a lower-middle-class family. Perhaps it was a hand me down. 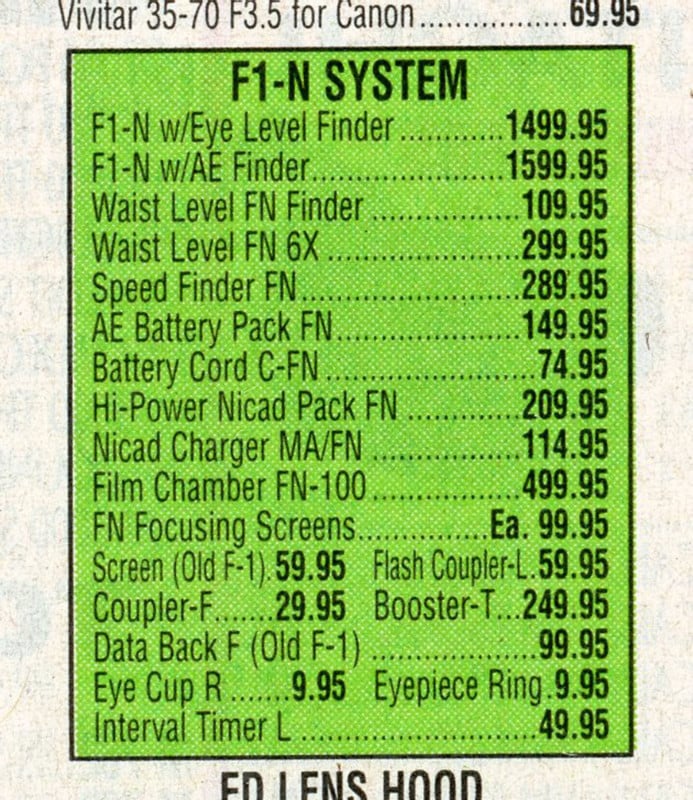 The Canon F-1 was a legend of the time, and regularly made top-recommended cameras in magazines like Modern Photography and Popular Photography years after much more advanced models were released.

In this first look by Popular Photography, released in September 1981, it is explained that the new F-1 is also called just F-1 on the cameras but will be advertised as “New F-1” These days, however, it is known as the F-1n. 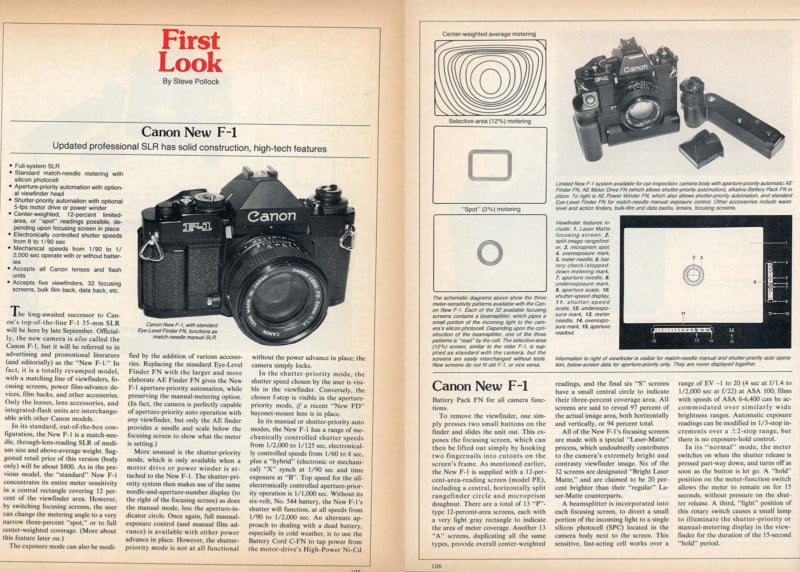 “It is a totally revamped model,” says reviewer Steve Pollock. “with a matching line of viewfinders, focusing screens, power film, advance devices, film backs, and other accessories, Only the lenses, lens accessories, and integrated flash units are interchangeable with other Canon models.”

Also in the lab report is a visual of how each of the three metering modes is prioritized, and a look at the viewfinder. 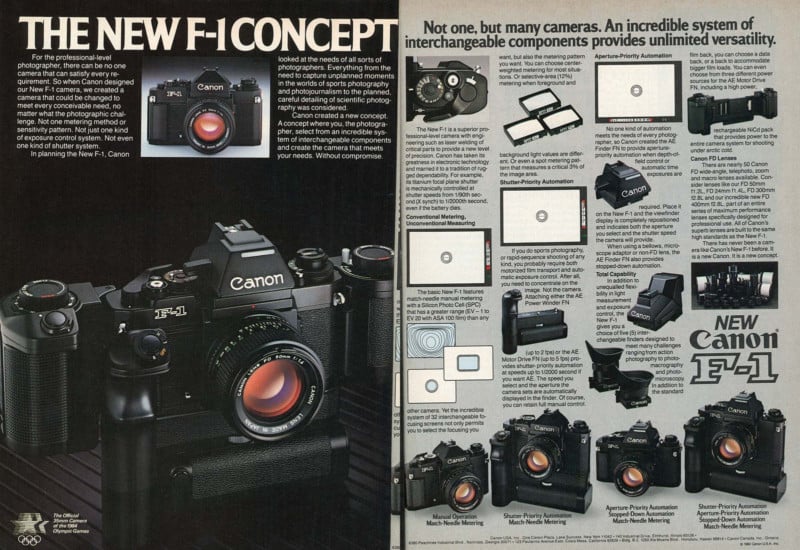 “For the professional level photographer, there can be no one camera that can satisfy every requirement. So when Canon designed our New F-1 camera, we created a camera that could be changed to meet every conceivable need, no matter what the photographic challenge.”

Buying an F-1n today will set you back anywhere from three to six hundred depending on the condition.

In The Amazing Spider-Man, released in 2012 we are introduced to Andrew Garfield’s Peter Parker. What I find fascinating is that one of the newest incarnations of Spider-Man sports the oldest camera. Not with the earliest release, but the most aged camera. You can see it pretty early on in the movie, and film enthusiasts will pick up right away that it’s a rangefinder.

Now, I must confess that for the longest time I was convinced it was a Cannonet QL17 GIII. However, during my research, I discovered it was in fact a Yashica Electro 35, a camera originally introduced in the mid-1960s. This discovery would require some further narrowing down because according to KenRockwell.com, there were several versions of this camera between 1966 and 1973.

A scene in the movie helps reveal exactly which model it is though. Spider-Man is in the sewers pursuing The Lizard, hoping for a photo. Attached to the camera, is a flash. Only two models of the electro 35 had a hot shoe, and only one came with a chrome finish, The Electro 35 GSN, released in 1973. 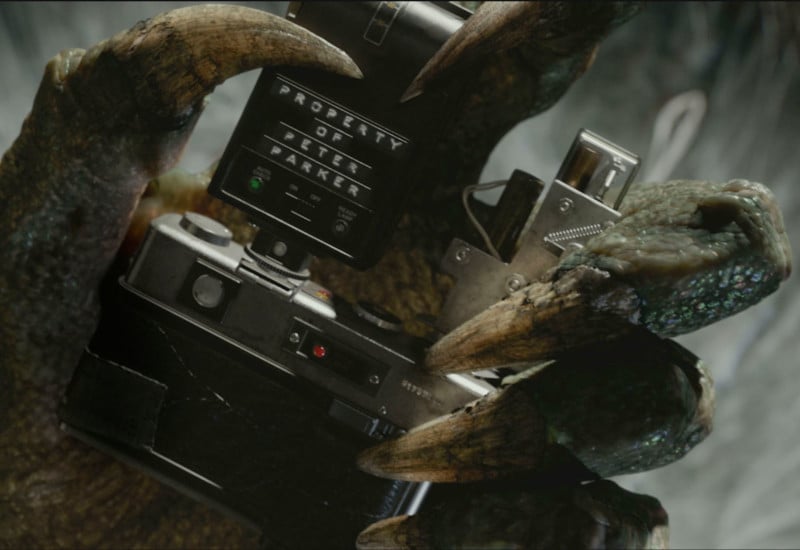 You can also see the GSN label briefly here. 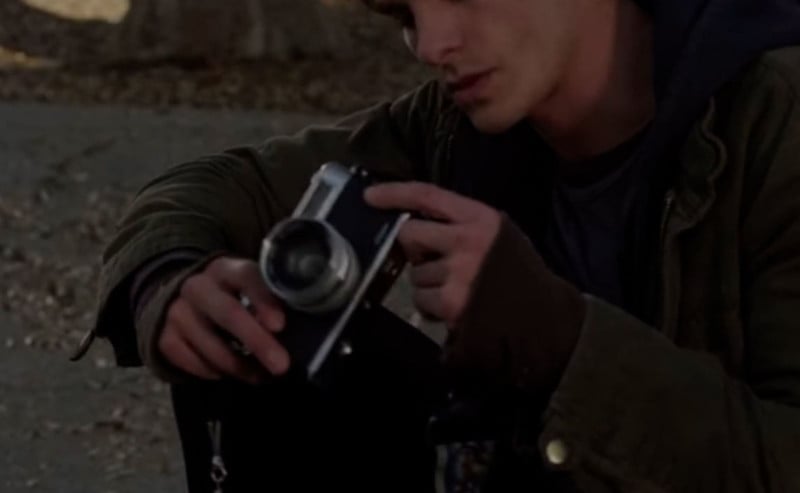 The Yashica Electro 35 is an aperture priority rangefinder, highly popular in its time and known for its low price tag. 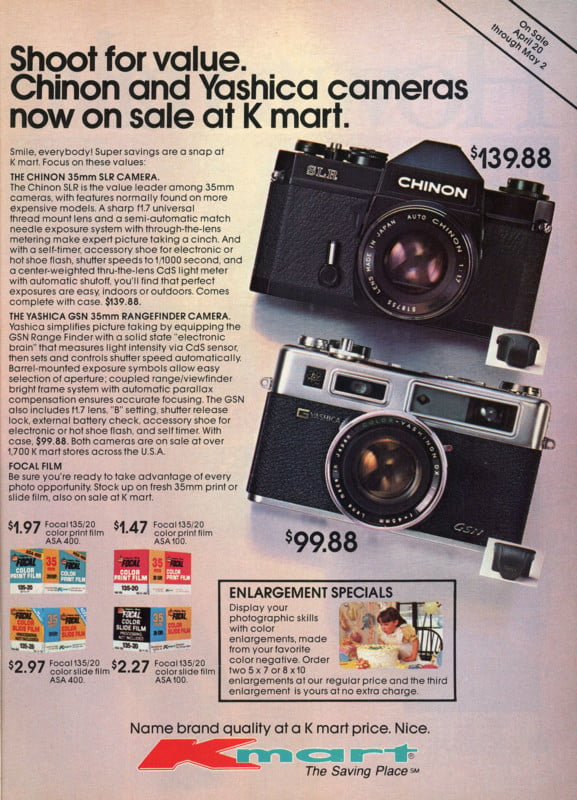 “Even if you’ve never taken a picture before, the amazing new Yashica Electro 35 will make you an expert instantly,” claims this ad from the 1960s.

Another ad I found put the Electro 35 in the hands of a professional photographer: Charles Varon. In the ad, it’s explained that usually, he uses expensive equipment, and he was frustrated he couldn’t bracket and had to “leave it all to the solid-state electronic exposure system with the electromagnetic shutter.”

Of course, his mind was changed after the development. “He’s not skeptical anymore,” says the ad. 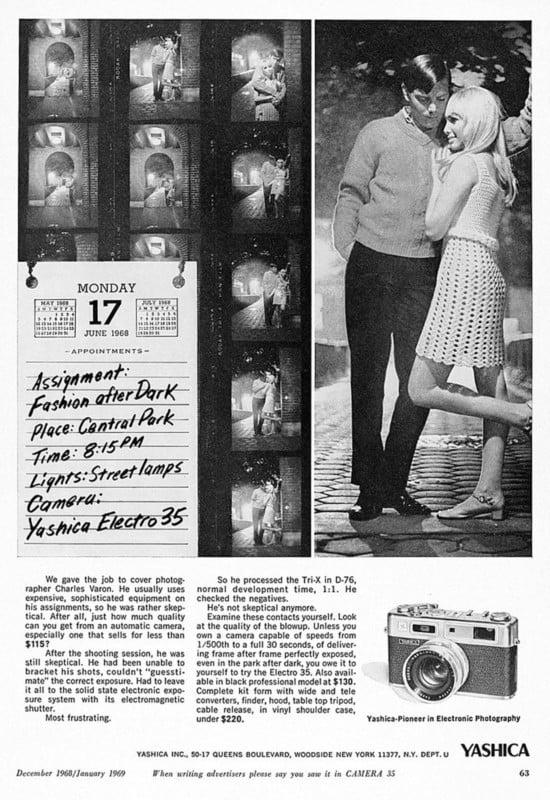 Another version of this ad sums it up by saying, “You’d take a dozen shots to get this picture. With Yashica’s Electro 35, one’s enough.”

In a full report by Phot Argus by Gerard Bouhot, we get a detailed explanation of how the camera works, an exploded view, and some pros and cons. A few of the cons include the inability to go over 400 ASA and the need for a mercury battery. Among the pros are reliability, a battery check, and simplicity for beginners. 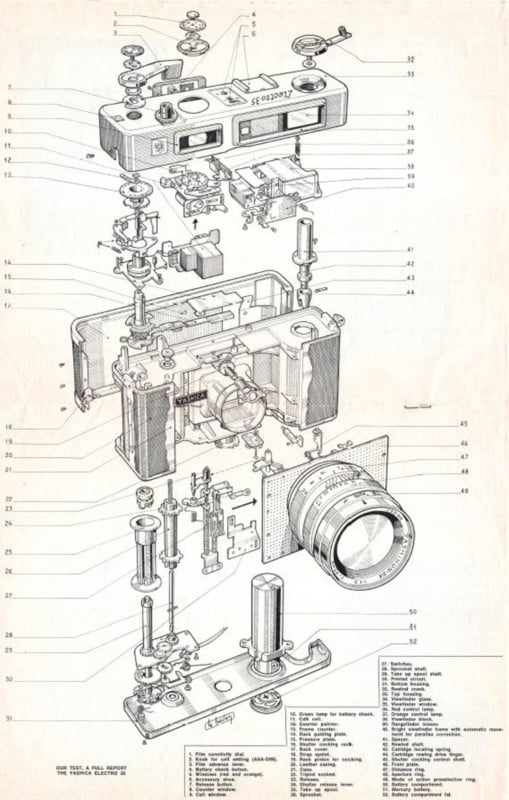 You can still find one today for under $100 on eBay.

And there you have it, Spider-Man’s cameras. I hope you found this deep dive into photography history interesting. What fascinates me is that despite thirty-five years passing, the camera models stayed within a decade. 1971, 1973, and 1981.

I would absolutely love to see Tom Holland’s Peter Parker adopt photography at some point, but I won’t be holding my breath for any film cameras.

About the author: Azriel Knight is a photographer and YouTuber based in Calgary, Alberta, Canada. The opinions expressed in this article are solely those of the author. You can find Knight’s photos and videos on his website, Twitter, Instagram, and YouTube.