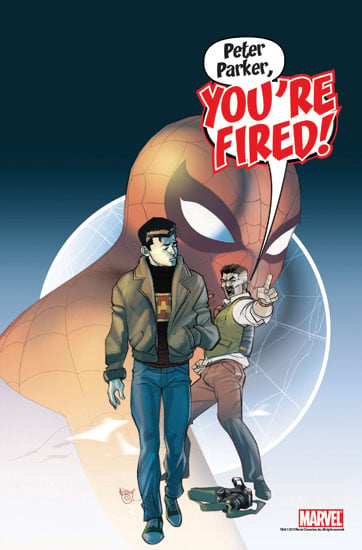 It’s a tough job market in New York, and even Spider-Man has difficulty finding job security these days.

In this month’s issues #623 and #624 of Marvel’s Amazing Spider-Man comic, Peter Parker loses his job as the photographer for the mayor — former Daily Bugle EIC J. Jonah Jameson.

According to Marvel, Petey has to make a troubling decision between freedom of press or withholding certain information from the media in order to protect a friend, but his decision costs him his job.

Peter Parker has always been a bit of an everyman, often beset with real problems in a real city, on top of the occasional super villain encounter. Parker has had to deal with marital problems, finding freelance gigs,  and dealing with the deaths of loved ones.

And now he faces every photog’s worst fear: having a smeared reputation. On top of being able to afford to web-sling through the city, let alone keep an apartment, he now has the daunting task of trying to find a job. Yikes.

Image credit: Image by Marvel Entertainment and used with permission